Egypt recently announced a deal between Jordan and Iraq for the establishment of a land route connecting the three countries, in a bid to boost economic and trade relations between them. 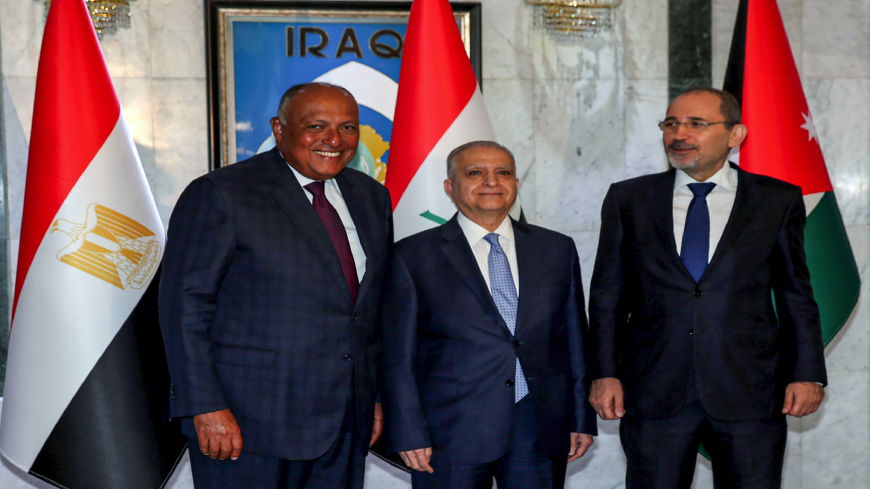 CAIRO — Egypt’s Minister of Transport Kamel al-Wazir and Jordan’s Ambassador to Cairo Amjad Adaileh met in Cairo on March 1 to discuss bilateral relations. The two officials also stressed the importance of a protocol signed previously between the two countries and Iraq to operate a land route to transport passengers between the three countries.

The route would start in Cairo and continue to Amman and Baghdad at a fare of $130 per passenger, including the ferry service fare between Egypt’s Nuweiba and Jordan’s Aqaba.

This is the first time the protocol is publicly announced. There are no details on when and where it was signed between the three parties, and no information has thus far been revealed about its potential cost or about the start of its implementation. Al-Monitor tried to contact the Ministry of Transport, but it refused to comment.

The ministry added in its statement that the land route aims to facilitate movement between the three countries and the travels of Egyptian workers and students to Jordan and Iraq.

According to the ministry’ statement, the Egyptian and Jordanian sides discussed during the meeting the possibility of supporting trade between the two countries by overcoming all obstacles in both of their ports, in a bid to facilitate the transport of Egyptian products to Amman and from there to neighboring countries, including Syria and Iraq and vice versa. The parties stressed the need to develop the Arab Bridge Maritime Company owned by the three countries of Egypt, Jordan and Iraq.

The Arab Bridge Maritime Company was established in 1985 and has headquarters in all three countries. Its aim is to promote maritime transport in the Red Sea region and beyond, and it seeks to become an Arab bridge linking Arab Asia and Arab Africa, according to its website.

In this context, Ayman Samir, a professor of international relations at Cairo University, told Al-Monitor, “The announcement of the establishment of this land route comes as part of the 'New Sham’ project, which includes a number of economic projects serving the peoples of the three countries, and taking advantage of their resources and assets.”

The New Sham is a project put forth by Iraqi Prime Minister Mustafa al-Kadhimi during the tripartite summit between Iraq, Jordan and Egypt in Amman on Aug. 25, 2020.

The project provides for the establishment of a common economic base for the three countries that secures long-term investment partnerships and a broad trade exchange contributing to enhancing the Arab market, based on oil abundance in Iraq, and the human capital in Egypt, with Jordan as a link between the two.

Samir considered the New Sham project a political plan between the leaders of the three countries to achieve integration between them at the economic level, which would entail several projects, including the reconstruction of Iraq in exchange for oil.

Both Egypt and Jordan are already engaged in development projects in Iraq, with Egypt receiving oil imports in return. The two countries are also involved at the security level with Baghdad, based on cooperation in combatting terrorism afflicting the region.

Samir said Egypt could benefit from the landline project, which would pave the way for the return of Egyptian workers to Iraq as was the case prior to 2003 when “nearly 4 million Egyptians worked in Iraq.”

“This would represent a major shift in Egyptian income, which heavily depends on Egyptians’ remittances,” he added.

He said, “If this venture proves to be successful, other countries could come on board in the future, especially since the three countries have the necessary capabilities to form a strong bloc in the political and economic sphere.”

Yaman al-Hamaki, a professor of economics at Ain Sham University in Cairo, told Al-Monitor via phone, “Generally speaking, there are economic and political challenges facing Arab countries, which could only be overcome through solidarity and [securing] common interests. This could be done by exchanging investments and benefiting from the free trade areas, which would strengthen relations between governments and businessmen in the three countries.”

Commenting on the land route, Hamaki said, “Transport routes are at the basis of trade in addition to supporting the movement of tourists from the three countries, especially between Egypt and Jordan, where tourism is one of the main state resources. This could be beneficial for both Amman and Cairo.”

She said the land route will contribute to Egypt’s greater exploitation of the Agadir Agreement it had signed with Jordan, Morocco and Tunisia back in May 2001, providing for the establishment of a free trade area between the four countries, which would consolidate integrated cooperation between the signatories and then lead to exports to Europe.

Hamaki said Iraq has enormous investment opportunities for Egypt through the reconstruction projects that can be provided by Egyptian companies, which could bring in hard currency to the country. Iraq, on the other hand, would benefit from the highest efficiency at the lowest cost through cooperation with Egypt in this regard, she added.

Egypt and Jordan, on the other hand, enjoy strong relations. On the political level, the two countries share the same vision on most regional issues. And a large Egyptian community lives in Jordan, estimated at about 800,000 people who make up one of the largest Egyptian communities in the world.

Moreover, the value of Jordanian investments in Egypt stands at about $2 billion in various sectors, while Egypt maintains significant investments in Jordan amounting to about $1 billion, according to the figures on the Jordanian Ministry of Foreign Affairs website.

Egypt also maintains good relations with Iraq. On the political level, the two countries have exchanged many official visits since June 2013.

On the economic level, the volume of trade between the two countries amounted to about $486 million in 2019 — $479 million in Egyptian exports and $7 million in imports from Iraq, according to the government-owned State Information Service website.

Tariq Fahmy, a professor of politics at Cairo University, told Al-Monitor via phone, “The announcement [on the land route] conveys an important message that the alliance between the three countries has entered into implementation through economic projects and is no longer limited to political work only."