Egypt to invest in restoration of war-torn countries

Egyptian Prime Minister Mustafa Madbouly recently issued a decree to form an action group aimed at investing a great deal of effort in the reconstruction of five Arab countries. 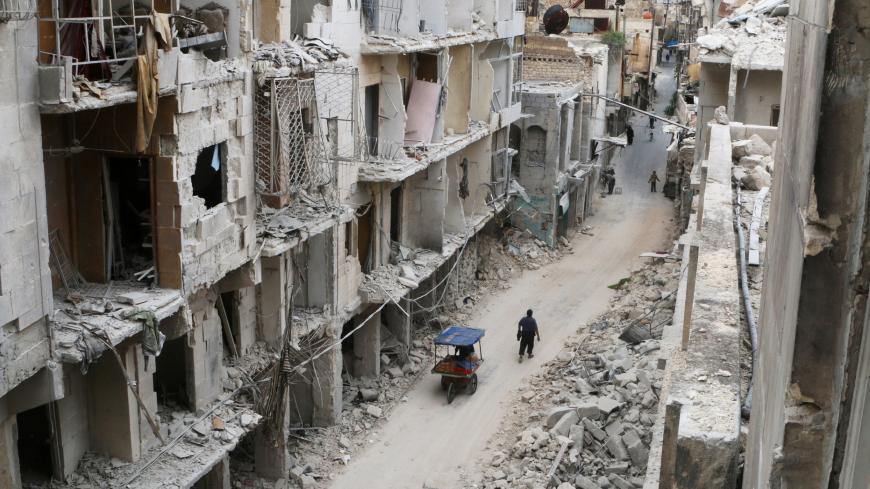 Residents walk near damaged buildings in the rebel-held area of Old Aleppo, Syria, May 5, 2016. - REUTERS/Abdalrhman Ismail

CAIRO — Egyptian Prime Minister Mustafa Madbouli issued Aug. 26 a decree aimed at forming a technical, financial and legal action group that has the contracting, business and logistics expertise to work on reconstruction in Iraq, Syria, Libya, Yemen and Palestine.

Abdel Aziz added that the EFCBC is currently examining the Egyptian companies capable of working in the field based on their expertise and capabilities. This aims at enhancing the role of these companies in the abovementioned countries and minimizing the risks they may face. These companies will be announced as soon as the EFCBC examination is over.

Egypt had sent last Feb. 14 a delegation headed by Ibrahim Mahleb, the assistant to the president of the republic for strategic and national projects, to the conference on the reconstruction of Iraq held in Kuwait in the presence of about 200 Egyptian companies. Mahleb stressed Egypt’s keenness to fully participate in Iraq’s reconstruction process.

Two-thousand companies from different countries, including the United States and France, took part in this conference.

On the sidelines of the conference, the Iraqi Central Bank governor and the adviser to the prime minister, among others, called on Egypt to participate in the construction of 2 million housing units and contribute to the generation of electricity in Iraq given Egypt’s experience in the field.

Of note, an Egyptian delegation including ministers and businessmen headed by Mahleb had visited Iraq Feb. 2 before the conference in order to showcase the potential of the Egyptian factories and companies in the field of reconstruction.

Ambassador Jamal Bayoumi, the former assistant to the minister of foreign affairs and the secretary general of the Union of Arab Investors, told Al-Monitor that “albeit a little overdue, the recent Egyptian concerted effort to get involved in the reconstruction of some Arab countries is a good omen and certainly a right step in the right direction.”

Bayoumi added, “During the last seven years, Egypt only took positive political and security steps in the countries that suffered after the Arab Spring revolutions, especially considering that it insisted on the need to protect national states and national armies against disintegration. Egypt's lack of involvement in any conflict in these countries is an important factor that helps it intensify its foreign reconstruction efforts.”

He suggested establishing companies that include skilled elements from the government sector, the business sector and the private sector in order to launch investments in Arab countries that need reconstruction, all the while employing the largest number of Egyptian laborers.

Bayoumi also stressed the importance of such a step given the remittances that workers abroad would be transferring to the national economy. Remittances have significantly increased in the recent period compared to previous years. They reached about $19.5 billion between July 2017 and March 2018, according to the Central Bank of Egypt. This reflects the importance of such a step as one of Egypt's foreign currency sources.

It is worth mentioning that Libya's Minister of Labor and Rehabilitation Al-Mahdi al-Amin said in a press statement to the Egyptian daily Akhbar el-Yom last April that the Egyptian workforce will have priority in the projects, factories and cities established in the framework of the Libyan reconstruction process during the next stage. The Egyptian workforce, Amin added, enjoys major skills that left their marks on the reconstruction of Libya before the revolution.

Amr El-Gohary, a member of the Egyptian parliament’s Economic Affairs Committee, told Al-Monitor that parliament is widely supportive of the Egyptian efforts in the field of reconstruction in some Arab countries given the political and economic gains that would result thereof.

“Egypt has considerable experience in the fields of reconstruction, infrastructure and real estate, and the Egyptian companies have come to build a good reputation in Arab countries, which is an important factor that helps the Egyptian ability to achieve a developmental boom in those countries,” Gohary added.

Asked about the economic opportunities that would maximize benefits for Egypt, Khaled el-Shafei, an economist and the head of the Capital Center for Economic Studies and Research, told Al-Monitor, “The formation of a diversified action group to strengthen Egypt's reconstruction efforts is a right step to get Egypt back to its Arab depth, especially as far as the economic sphere is concerned.”

“Egypt will greatly feel the economic benefits of such a step, especially when it comes to sectors related to construction and infrastructure. For example, the Libyan market is the biggest importer of Egyptian ceramic, and Syria mainly depends on Egyptian cement, among other raw materials needed for construction,” Shafei added.

Of note, the volume of Egyptian construction material exports amounted to about $2.8 billion in the first half of 2018.

As for the number of Egyptian laborers expected to participate in the reconstruction projects, Shafei said the envisaged projects “can absorb about 5 million Egyptian workers, and this will significantly contribute to reducing the unemployment rate and increasing the remittances that support the national economy.”

Asked about the obstacles facing Egypt, Shafei said, “I do not expect the work of Egyptian companies in these countries to be easy in the presence of strong competition from Russian companies, among others. There are a lot of countries, especially China and Russia, that are seeking to win the largest share that would allow them to achieve the biggest gains — especially in Syria, Iraq and Libya.”

Shafei called for coordination among Egyptian companies, the concerned ministries and the commercial representation offices in these countries in order to provide the Egyptian companies with details concerning any trade or industrial alliances in the field of reconstruction, all the while examining the best opportunities for Egyptian companies.