Egypt’s support for Hifter could cost it work in Libya

Mounds of money could await companies able to win reconstruction contracts in war-torn Libya, but some Egyptian business owners wonder if they will be at a disadvantage because of the side Cairo chose in the civil war. 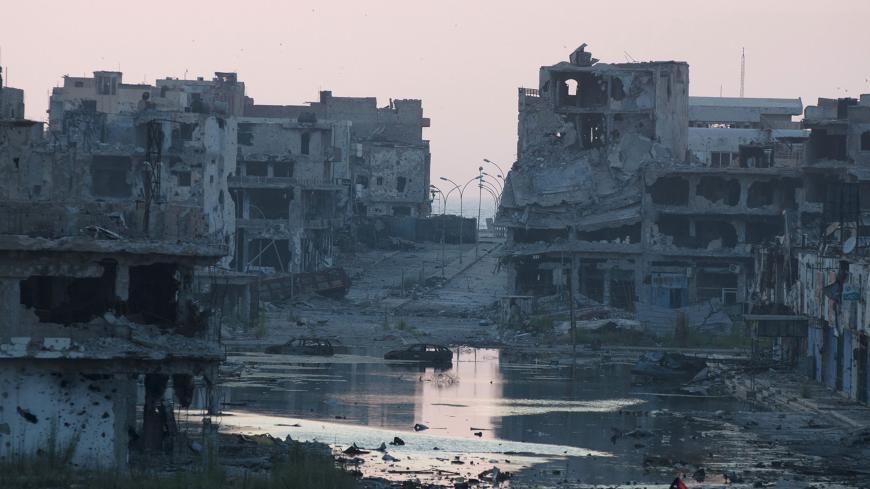 CAIRO — Egyptians looking to snag lucrative reconstruction contracts in Libya are divided over whether their country's support for one side in the civil war will hurt their chances.

On May 5, Fayez al-Sarraj, prime minister of Libya's Government of National Accord (GNA) in Tripoli, called on Egypt and other countries to end their support for the rival Libyan National Army (LNA) government led by military strongman Gen. Khalifa Hifter. Sarraj asked them to throw their weight behind the Libyan people “represented by the elected GNA.”

The GNA is considered the internationally recognized government because it is backed by the United Nations and European Union. It had backing from the United States until last month, when President Donald Trump flipped his position despite opposition in Congress. The general and his LNA are also supported by Saudi Arabia, the United Arab Emirates, Russia and sometimes France, which last month was said to back Hifter and this month "reaffirmed" its backing for the GNA.

Hifter leads the “eastern government" based in Tobruk. Egyptian President Abdel Fattah al-Sisi has consistently backed Hifter, even supporting his move on Tripoli that began April 4. The GNA has condemned the ongoing offensive, describing it as an attack on areas of sovereignty in Tripoli.

While Egypt has been a leading contender for Libyan reconstruction operations, its position could be jeopardized by its support for the GNA's rival. The turbulent security and military situations in Libya are also casting doubt on the projects themselves. This comes amid unconfirmed reports April 28 that Egyptian authorities closed the land borders with Libya indefinitely. These borders represented Libya's gateway for many Egyptian exports and labor.

Many Egyptian businesspeople from the Federation of Egyptian Industries (FEI) have said the war will not affect Egypt's investments in reconstruction operations, either through exports to Libya or through direct investment. “Most Egyptian exports to Libya go to the reconstruction of Benghazi, where there is no war. The war [now] is concentrated in Tripoli and its outskirts,” hundreds of miles away, Kamal al-Desouki, deputy head of the Building Materials Chamber at FEI, said in a press statement April 9.

Speaking to Al-Monitor, Desouki said he doesn't expect Egyptian exports for Libya's reconstruction to decline. He noted that the reports about the closed land borders remain unconfirmed and that many Egyptian exports are reaching Benghazi through Libya's seaports.

However, Mustapha Younis, who owns a small Egyptian firm for imports and exports, told Al-Monitor that Desouki didn't take into consideration that Benghazi is a distribution point for Egyptian products to other Libyan cities. This means that after Egyptian products reach Benghazi — whether by land or sea — they must still be distributed to Tripoli, Tobruk or other Libyan cities, said Younis, a former marketing and distribution manager at one of Egypt’s cement factories, which he declined to name.

He noted that the war in Tripoli and the surrounding cities will reduce the demand for reconstruction materials from Egypt and from all countries as the reconstruction process seems to be halted in light of the security situation.

Many other Egyptian businessmen and workers in Libya who spoke to Al-Monitor expressed their concerns over the situation and Egypt's participation in the reconstruction.

Egyptian exports to Libya, especially construction materials, are considered one of the main pillars of the private sector’s participation in Libya's reconstruction. According to Trade Map, a website that tracks international trade, Egyptian exports to Libya of ceramics, cement, aluminum, electrical appliances, furniture, carpets, iron and steel reached almost $150.7 million in 2018.

Although the amount seems modest compared with total Egyptian exports to the world — which stood at about $29.4 billion in 2018, according to Trade Map — exports to Libya remain an important source of income for Egyptian manufacturers.

Since 2012, many Egyptian construction and infrastructure companies — most notably Orascom, Arab Contractors, Elsewedy Electric and its affiliate Elsewedy Cables, and Hassan Allam Holding — have tried to acquire large shares of Libyan reconstruction projects. But the work has faltered because of the ongoing tension and the change of official governments. However, last month, some newspapers reported that these same companies resumed negotiations.

A source from Cairo-based Global Consolidated Contractors who requested anonymity told Al-Monitor that the situation in Libya will indeed hamper Egyptian companies' participation in reconstruction in most areas. His company's reconstruction projects in Misrata came in 2014, after just one year, due to the unrest there. The civil war began in February 2011 and quieted that October, but picked up again in 2013 and has continued.

The source believes tensions in Libya will only keep escalating, especially in light of the current battle for Tripoli.

But Al-Mahdi Al-Amin, minister of labor and rehabilitation for the GNA, said the Libyan government prioritizes efficiency when selecting workers and companies for reconstruction projects — regardless of any political disputes. Amin told Al-Monitor that when he visited Egypt last month, he met with Egyptian Minister of Manpower Mohamed Saafan in Cairo to discuss ways of bringing Egyptian labor back to Libya despite Egypt's support for the LNA and Hifter.

Still, Arif Desouki, an economics professor at October 6 University, told Al-Monitor there is no doubt the security and military situation in Libya will negatively affect Egyptian companies and workers seeking Libyan reconstruction contracts, even if the GNA does not object.

He also warned that the suddenness of the assault on Tripoli might even deter Egyptian businesses from investing in reconstruction efforts in other countries, such as Syria and Iraq, for fear the same thing could happen there.