Cairo quiet as Ankara reaches out to eastern Libya

Cairo and Ankara are at odds over Libya and the wider Mediterranean region, but Ankara’s recent contacts with Cairo’s allies in eastern Libya might encourage rapprochement between the two regional powers. 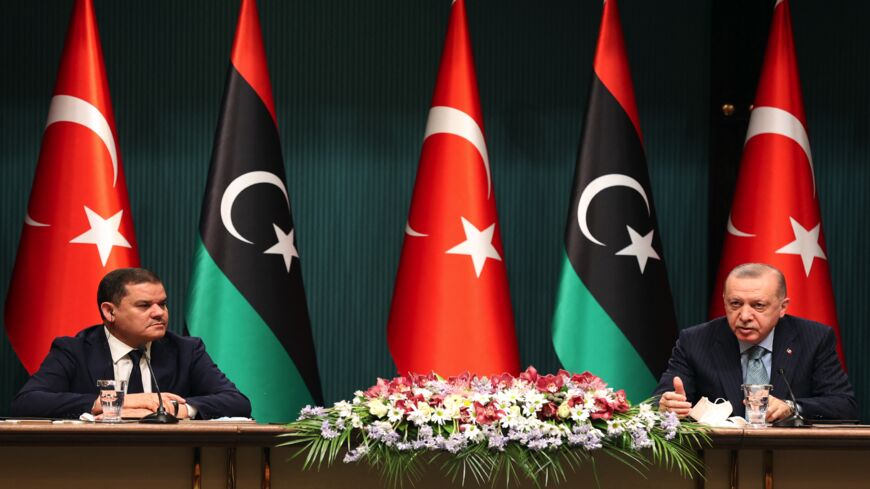 Turkish Ambassador to Libya Kenan Yilmaz met on Jan. 19 with Libyan parliament speaker Aqila Saleh in his hometown of al-Qubah, west of the seat of parliament in Tobruk.

Yilmaz said in press remarks that there are plans to “reopen [Turkey’s] consulate-general in Benghazi,” which has been closed since 2014 during the height of the conflict in Libya’s second-biggest city.

Yilmaz also visited Benghazi on Jan. 29 where he met with municipality officials and a number of parliamentarians.

Both visits appear to be follow-ups to a recent trip, the first of its kind, by Libyan parliamentarians to Ankara where they met with Turkish officials, including President Recep Tayyip Erdogan. Most of those parliament members were also present during the ambassador’s visit to Benghazi.

Yilmaz told his Benghazi hosts that Turkey’s consulate will reopen when “conditions” are right and that a Turkish Airlines team is to “assess” the local Benina airport to decide when to resume air travel between Benghazi and Istanbul.

During his al-Qubah meeting with Saleh, the envoy discussed ways to encourage Turkish companies to "complete their unfinished projects" and implement new ones — one of the topics discussed by parliament members during their Ankara ice-breaking trip on Dec. 15.

Turkish companies had won multibillion-dollar infrastructure, power generation and road-building contracts in Libya prior to the 2011 civil war that forced them along with hundreds of other foreign companies to flee the country.

Notably, the news of Saleh’s meeting with Yilmaz did not feature on the parliament’s website nor has it been commented on by the legislator’s spokesman, Abdalla Belhiq, as is usually the case. However, it did appear on Saleh’s media adviser's Facebook page. This raises questions about whether the radio silence carries any political connotations. Salem Belgasem, a political science professor at the University of Benghazi, believes it does.

Belgasem told Al-Monitor, “Saleh is testing the mood” both inside the parliament and “across the borders.”

He said that “there are parliament members who are not yet ready” to welcome any Turkish official after years of bad relations and “dehumanizing media campaigns” between the Libyan parliament and Ankara.

On the other hand, Belgasem continued, Egypt, “as a reliable friend of Saleh,” must be watching and re-evaluating its contacts with Ankara, its rival in Libya and the wider region.

Cairo has so far not commented on the rapprochement.

Cairo and Ankara have been at odds since President Abdel Fattah al-Sisi came to power in July 2013 in what Ankara described at the time as a military coup against democratically elected Mohammed Morsi — a member of the Muslim Brotherhood, Turkey’s ally. Almost all diplomatic contacts between the two capitals were cut and relations deteriorated further over the conflict in Libya.

While Egypt, the United Arab Emirates (UAE) and Russia supported Libya’s eastern military strongman Gen. Khalifa Hifter in his campaign to rid Libya of “terrorists and militias,” Turkey, Italy and Qatar were supporting Tripoli’s UN-recognized Government of National Accord (GNA).

In April 2019, Hifter’s self-styled Libyan National Army (LNA) launched what he called Operation Flood of Dignity to take the capital, Tripoli. The LNA’s 13-month siege of Tripoli failed to break through the city, despite being only a few kilometers away from the GNA’s headquarters.

Fighting stalled for a while before the GNA’s allied militias, with substantial Turkish support, gained the upper hand in early 2020.

Meanwhile, Ankara shipped hundreds of troops, thousands of Syrian mercenaries and weapons to Tripoli. At a later stage, Turkish-made Bayraktar armed drones were deployed, ending Hifter’s air superiority and thus tipping the balance of power against him.

In return for Ankara’s support, the GNA signed on Nov. 28, 2019, two major agreements: a security deal to help the GNA in defense, security and training; and a maritime agreement demarcating the two countries’ Mediterranean Sea borders.

At the time, Saleh and the entire legislature rejected both deals, refusing up until now to ratify them, which means they are not binding to Libya, although Turkey sees them as binding — a point reiterated by Yilmaz in Benghazi. The latter was quoted as saying that the presence of Turkish troops in Libya is “legitimate and based on a [memorandum of understanding] to provide advice and training to Libyan cadres.”

He further indicated that if there is a need, “Ankara will expand its presence and training programs in Libya.”

Throughout the conflict over Tripoli, Saleh, his ally Hifter and the majority of parliament members used to refer to the Turkish military presence in western Libya as an occupation force. In a January 2020 speech, Hifter said, “We (the LNA) declare jihad and complete mobilization,” urging every Libyan to “carry arms” to defend Libya’s territories against what he described as Turkish invasion.

Egypt, Greece, France, Cyprus and the European Union were unhappy with both deals, in a sign of the wider regional repercussions stemming from the conflict in Libya, which spiraled over the years into a proxy war. Greece went as far as expelling Libya’s ambassador, Mohamed al-Menfi, who is Libya’s current head of the presidential council in the so-called Government of National Unity, which still complies with both agreements struck by its predecessor.

Cairo’s response to the 2019 deals came in the form of increased support to Hifter’s campaign to take Tripoli. But by June 2020, the LNA’s military operation floundered under Ankara’s drone attacks, forcing it to first withdraw its units surrounding Tripoli, before the entire army in western Libya started to collapse and retreat to Sirte, a coastal city some 500 kilometers (310 miles) east of Tripoli.

Fearing the worst, Sisi warned back then that “Sirte is a red line” and crossing it east would trigger direct Egyptian military intervention in Libya. Egypt found itself in a potentially direct military confrontation with Turkey in Libya’s proxy war. However, the United Nations’ political mission in Libya managed to broker a Libyan cease-fire signed in Geneva on Oct. 23, 2020, which is still holding to this day.

While the situation in Libya cooled down, Ankara sought to mend ties with Cairo in order to reach some kind of understanding.

In this context, a retired Egyptian ambassador with extensive insight into his country’s regional relations told Al-Monitor on condition of anonymity, “Cairo must have known about the Turks reaching out” to eastern Libya.

He said “the civil war in Libya” is a threat to “Egypt’s security” and Ankara’s role in it “is not welcomed” by Cairo. The former ambassador explained that “amending ties between eastern Libya and Ankara” must be seen in a larger regional perspective.

Indeed, a trend has been ongoing among regional capitals with stakes in the Libyan file, aimed at solving conflicting interests. Erdogan is scheduled to visit Saudi Arabia and the UAE after the recent normalization between Ankara and Abu Dhabi. This leaves Cairo out.

However, the Turkish interest in fence-mending with Cairo has always been on Ankara’s mind. In a press briefing last March, Erdogan talked about diplomatic contacts with Egypt being resumed, but at a low level.

In May, a Turkish delegation visited Cairo to discuss the resumption of contacts; more recently, Erdogan said he is sending his ambassador back to Cairo. Libya was one of the topics at the heart of all discussions between Egypt and Turkey, and they seem to have reached some compromise given the new reality in Libya. Libya now has a new Government of National Unity supported by both Ankara and Cairo. Libya’s Prime Minister Abdul Hamid Dbeibah visited Ankara and Cairo in April and September, respectively.

“Substantial progress has been made,” the former Egyptian ambassador said. He also warned that everything “could unravel” if Cairo and Ankara did not settle their “differences not only over Libya but also over the Mediterranean,” where the economic stakes are high for both countries.