Libya’s rekindled power struggle has left Turkey in an ambivalent position and might force it to review its alliances. 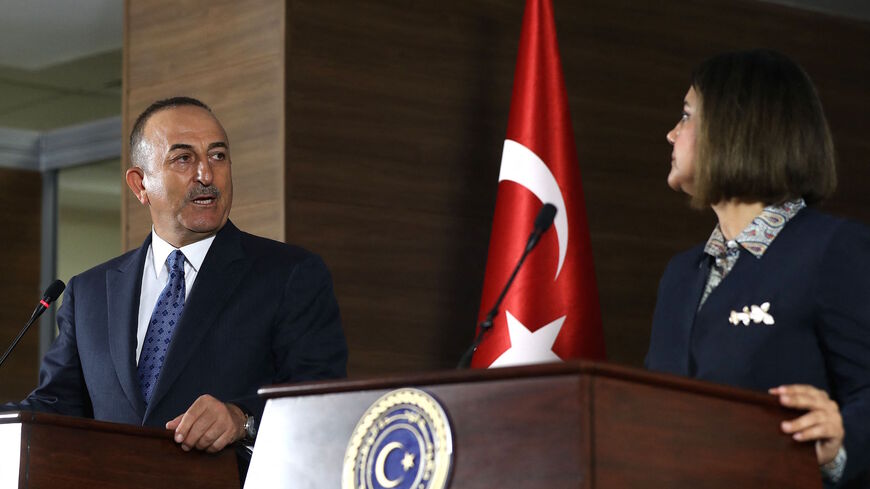 (R to L) Libya's Foreign Minister Najla al-Mangoush and Turkish counterpart Mevlut Cavusoglu give a joint press conference in the capital Tripoli on May 3, 2021. - MAHMUD TURKIA/AFP via Getty Images

Libya’s interim prime minister, a close ally of Turkey, has been rejected by parliament in a rekindled power struggle in the war-torn country. But his replacement is no stranger to Ankara and might help it make peace with eastern Libya.

The latest political twist in Libya saw adversaries of Turkey team up with allies of Turkey to unseat interim Prime Minister Abdul Hamid Dbeibeh, Turkey’s man in Tripoli. The House of Representatives, based in the eastern city of Tobruk, chose former Interior Minister Fathi Bashagha to form a new interim government Feb. 10 on the grounds that Dbeibeh’s mandate ended Dec. 24, when elections were supposed to be held under a UN-brokered peace plan but failed to go ahead. The Libyan National Army of eastern commander Khalifa Hifter supported Bashagha, who is expected to form a new government in two weeks.

Earlier in the week, the House of Representatives approved a road map to hold elections within 14 months. The UN Secretary-General’s special Libya adviser, Stephanie Williams, has sought to convince the parties to have the elections by June.

Bashagha was a prominent ally of Turkey in 2019 and 2020, when Hifter’s forces, backed by Egypt, Russia and the United Arab Emirates, marched on Tripoli, and Ankara lent military support to the Government of National Accord to break the siege. But in the ensuing UN-sponsored process, in which the warring parties agreed on a new interim administration, Bashagha engaged in close dialogue with Egypt, France and the United States, shrugging off his image of “Turkey’s man.”

Bashagha was a vocal opponent of Dbeibeh’s presidential candidacy during the preparations for the failed elections. Eventually, he aligned with Hifter and Aquila Saleh, the House of Representatives speaker, to pave the way for the Feb. 10 move against Dbeibeh. Bashagha’s machinations may be harming his credibility in Turkey’s eyes, but Ankara has refrained from any open reaction.

Counting on the support of Turkey, the United States and several European countries, Dbeibeh defied the parliament’s move, arguing that a parallel administration will derail efforts to unite Libya. He vowed to hand over the mandate to an elected government only and sought to keep Tripoli’s military forces on his side. Fawzi al-Nuwairi, the deputy parliament speaker who appears to align with Ankara, convened a meeting with 40 parliamentarians in Tripoli Feb. 7 in a bid to form a bloc against Saleh. Several civic groups also lent support to Dbeibeh.

And on the eve of the vote at the House of the Representatives, Dbeibeh reportedly survived an assassination attempt in Tripoli.

How long Dbeibeh’s resistance can continue depends on the foreign powers that recognized the incumbent leadership in February 2021. Williams has urged the Libyan parties to focus on holding elections rather than forming a new interim government, which meshes with the priorities of Ankara and Washington.

But the international actors who now favor Dbeibeh staying on until elections might change tune in the face of developments on the ground.

Many have argued that Dbeibeh’s defiance would result in a parallel administration, reverse the process of uniting Libyan institutions and even rekindle armed conflict. Still, the Misrata clique, the staunchest opponent of the Saleh-Hifter pair, is not monolithic. Ahmad Maiteeq, a prominent Misratan and former deputy chair of the presidential council, allegedly struck a deal with Hifter and Saleh to withdraw from the contest for prime minister in favor of Bashagha.

In fact, Ankara had already realized that the Tripoli-Misrata camp was becoming too unstable to rely on. The main criticism Ankara faced over Libya at home was that it became a party to the war and put all its eggs in one basket, jeopardizing national interests. After all, Ankara has failed to guarantee the two critical deals on military cooperation and maritime borders that it signed with the Sarraj government. Saleh, who has denied parliamentary ratification to the deals, is now at the forefront of the move for a new government. Tripoli is no longer a place from where Turkey could sway the course of events.

Khalid al-Mishri, the head of the High State Council who has been close to Ankara, appears to be readjusting his position as well. Speaking after a secret meeting with Saleh in Morocco in early February, he cautioned that any new government installed unilaterally by the House of Representatives would be “stillborn” and unable to operate in Tripoli. Nevertheless, he added, “We agreed in principle on replacing the government, though this is not a priority for us.”

Dbeibeh, for his part, charged that a thirst for “power and money” was driving an alliance between the military (Hifter) and the Muslim Brotherhood, which have traded accusations of terrorism in the past.

On Feb. 8, Dbeibeh joined Turkish commanders at a military graduation ceremony in Tripoli, giving the impression that he retains Turkey’s backing. His quest for support took him also on a secret trip to Cairo, but he reportedly returned empty-handed. According to Africa Intelligence, Dbeibeh met with his Egyptian counterpart, but his requests to meet with the influential foreign minister and intelligence chief remained unanswered.

A day after greenlighting a government change, Mishri held talks with Turkish Foreign Minister Mevlut Cavusoglu — a likely sign that Ankara is flexible on government options. In its Feb. 10 session, the House of Representatives decided to also form a commission to draft constitutional changes, a move in line with Mishri’s call for constitutional amendments before elections.

Amid the shifting dynamics in Libya, dialogue with the eastern camp has become inevitable for Ankara. Turkey’s ambassador to Tripoli met with Saleh in al-Qubah Jan. 19. He then visited Benghazi, Hifter’s stronghold, accompanied by members of Turkish-Libyan business groups. Benghazi’s mayor welcomed the guests.

The thaw between Ankara and eastern Libya is important both in terms of healing Libya’s divisions and broadening Ankara’s maneuvering room in post-war Libya.

Turkish political and military influence may stand out in Tripoli, but Ankara seeks to also salvage economic ties with the east, including myriad construction projects in Benghazi, which Turkish contractors were forced to abandon due to the conflict. Preparations are already under way to resume flights to Benghazi. Turkish exports to Libya increased nearly 65 percent to $2.4 billion last year, according to Turkey’s Foreign Economic Relations Board. Restoring friendly ties with the east could push the figure much higher.

But whether Ankara’s problem with Hifter is resolved remains uncertain. Ankara may hope that Bashagha will care for its interests, but none of its calculations could be guaranteed in a new government equation involving Hifter.

The critical question now is this: Will Turkey protect Dbeibeh or encourage Bashagha to forge ahead? Or will it let things slide? For now, Ankara appears far from its hawkish, interventionist stance in 2019. If protecting Dbeibeh proves costly, it may well opt to go with Bashagha and make peace with the east.