Erdogan weighs next moves in Libya after Sarraj's departure

Ankara is keen to preserve its influence over the Tripoli government and several figures with close ties to Turkey are eyeing the prime minister’s post after the impending departure of Prime Minister Fayez al-Sarraj. 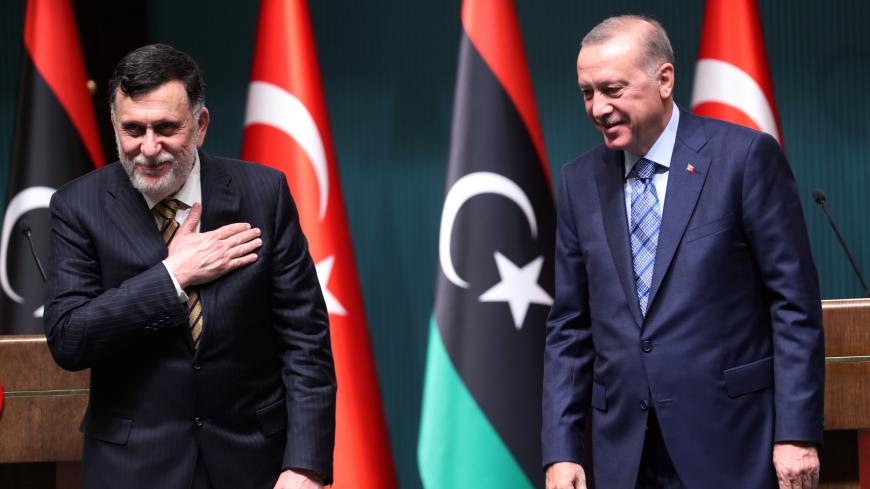 Anyone who might have thought that Libya’s UN-recognized Government of National Accord (GNA) is a monolithic and politically coherent entity has had much food for thought since political rivalries in Tripoli boiled over in late August and GNA head Fayez al-Sarraj announced his surprising plan to step down by the end of October.

The in-house wrangling came to a head Aug. 29 as Sarraj suspended Interior Minister Fathi Bashagha, who wields command over a Misratan militia aligned with the GNA, while Bashagha was visiting Turkey, the GNA’s chief foreign backer, together with Khaled al-Mishri, the head of the High Council of State. Mishri’s almost three-hour meeting with Turkish President Recep Tayyip Erdogan and Bashagha’s meeting with Turkish Defense Minister Hulusi Akar were believed to have particularly irked the GNA premier. Sarraj suspended Bashagha, holding him responsible for a violent crackdown on street protests, while an ensuing flurry of military activity in Tripoli and Misrata sparked talk of a possible coup against Sarraj. Though things seemed to cool down when Bashagha was reinstated in early September, the power struggle showed how fragile the GNA is.

Both the political and the military structures of the GNA consist of various groups and factions that are rivals to one another in terms of territorial control, tribal affiliations, ideology and state sponsorships. The power struggle erupted over corruption allegations, financial integrity issues within the GNA and the militia problem as soon as a cease-fire was declared with the eastern forces Aug. 21. Consequently, Sarraj announced his intention to “hand over [his] duties to the next executive authority no later than the end of October.”

Sources in Ankara told Al-Monitor that Erdogan tried hard to talk Sarraj out of stepping down, but the GNA leader stood his ground, saying he was tired and wanted to focus on his private business and family.

Sarraj’s decision to quit and his apparent resolve to see it through have only fueled the power struggle between GNA factions. A number of names have been floated as potential successors and some of them are seen as powerful candidates because of the support they receive from foreign backers. But before focusing on outside support, one needs to consider the internal political balances in Libya. An analysis of the powerful figures within the GNA is needed for making any predictions.

Bashagha, a native of Misrata, has Turkish roots, hailing from descendants of Ottoman janissaries who had settled in Libya. The offspring of the Turks in Libya are known as “Kuloglu,” or “sons of servants” — often Anglicized as Koulouglis. The community is concentrated in Misrata and its surroundings, representing Bashagha’s main military-political power base. Bashagha gathered power in the fighting in 2011 and by working with NATO during the Islamic State’s siege of Misrata. His grip over Misratan militias meant he remained a prominent actor during the war with eastern warlord Khalifa Hifter. He was appointed interior minister in 2018, boosted by strong Turkish support and his personal ties with Erdogan. Thanks to the Misratan factions, Bashagha consolidated power in Tripoli during the city’s defense against Hifter. His influence grew further after the GNA signed maritime and military cooperation accords with Ankara in November 2019 and the ensuing deployment of Turkish military and intelligence officers to help Tripoli repel Hifter. It is an open secret that Bashagha, at the apex of his power, is eyeing the leadership of the GNA.

Making use of the cease-fire, Libyans took to the streets to demand better services and protest corruption. As Bashagha has stood against corruption, the Interior Ministry did not intervene in the protests. However, the Nawasi forces, known for their affinity to Sarraj, did intervene, causing the deaths of several protesters. Ultimately, Sarraj made the surprise decision to suspend Bashagha while he was in Ankara.

Ahmed Maiteeq, vice president of the High Council of State, is another prominent candidate to replace Sarraj. Like Bashagha, he is a high-profile Misratan from the Kuloglu community who has cultivated political and commercial might during the Libyan conflict. Like Bashagha, Maiteeq has close economic connections with Turkey as well as in the areas under Hifter’s control. Notably, he was the first pro-Tripoli figure to visit Moscow in 2017 and maintains close contacts with Russia, standing out as the sole GNA figure on good terms with both Ankara and Moscow.

Yet, his posture has often landed him in trouble. In June, for instance, he drew the ire of fellow GNA members for urging GNA forces to halt an offensive on Sirte because mercenaries from the Russian Wagner Group were present on their route and warning that Sirte was a red line for Moscow.

More recently, Maiteeq held Russian-brokered talks with Hifter’s son Khalid on the Sirte issue, including on the lifting of the oil blockade that Hifter imposed in the area. On Sept. 18, he announced the terms of a deal with Hifter’s son, simultaneously with Hifter announcing an end to the blockade. The Libyan National Oil Company strongly condemned the deal, saying it would never accept the presence of Wagner forces in the region.

Mishri, the head of the High Council of State, is another figure to watch. Politically, he is considered to be aligned with the Muslim Brotherhood, although he said he had quit the organization in early 2019. Mishri, too, is known to be on good terms with Erdogan. Since the Turkish intervention in late 2018, he has focused on diplomacy, holding meetings with Italy, Morocco and Russia as well as representatives of the eastern forces. During talks in Morocco between the two Libyan sides earlier this month, he expressed readiness to meet with Hifter in the presence of Moroccan officials. He described the talks as “mere consultations, not dialogue” and insisted that no future office holders had been picked.

Some claim that Mishri is eyeing an active role in the prospective Geneva talks in a bid to restore the Muslim Brotherhood’s influence in the GNA. Along with Bashagha, Mishri is seen as a figure who prioritizes military options. According to GNA sources, Mishri wants to consolidate his power by prolonging the political transition process and it was his ties with Turkey that made him politically competitive. Many within the GNA believe Mishri has acquired economic might thanks to his relations with Qatar and Turkey and will try to use the Geneva process to become prime minister.

If Maiteeq or Mishri assume the premiership, it would mean increased Russian influence in the Geneva talks and the prospect of the GNA recognizing Aquila Saleh, the head of the Tobruk-based parliament, as a political figure. Such a scenario, however, would face opposition from Sarraj and Bashagha supporters within the GNA and pro-Hifter tribes in the east. As a result, a new conflict might flare up.

If Bashagha, Ankara’s favorite, takes the post, fighting with Hifter’s forces might resume, though it will be Ankara's call. A government led by Bashagha would face strong opposition from Madkhali Salafists, Muslim Brotherhood supporters and Sarraj proponents.