Fathi Bashagha has requested an investigation into his alleged conduct be televised. 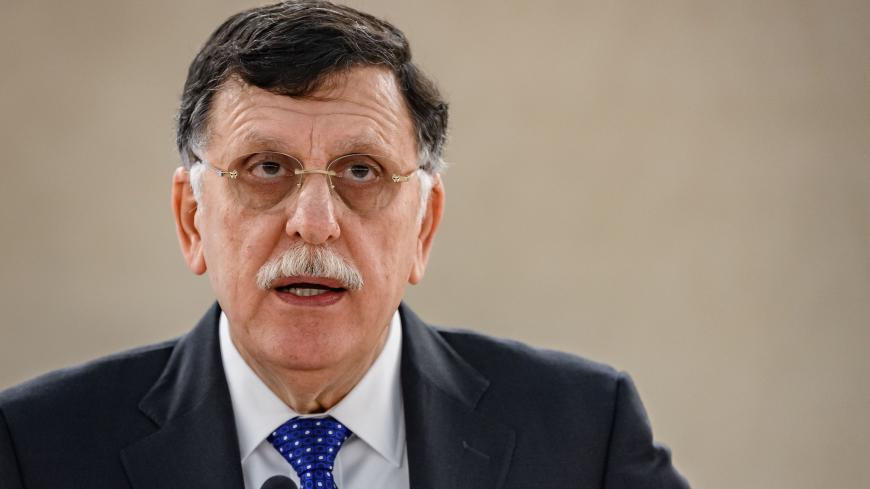 Prime Minister of the Government of National Accord of Libya Fayez al-Sarraj delivers a speech to the UN Human Rights Council on Feb. 24, 2020, in Geneva. - FABRICE COFFRINI/AFP via Getty Images

Prime Minister Fayez al-Sarraj of Libya’s Government of National Accord (GNA) suspended Misratan-born Interior Minister Fathi Bashagha on Friday, setting up a major split within the Tripoli-based government that threatens progress toward a cease-fire in the wider civil war.

The allegiance of the militiamen was not immediately clear, but Amnesty International said the attack occurred in an area controlled by the pro-GNA Nawasi militia. The GNA has threatened to use force to disperse the protesters.

Bashagha previously voiced support for protesters demonstrating against corruption and living conditions in Misrata, Zawiya and Tripoli. His suspension came while he was in Turkey on a diplomatic visit.

Why It matters:  Sarraj may have overplayed his hand. Tripoli cannot hold back Gen. Khalifa Hifter’s forces  and certainly can’t take Sirte and al-Jufra without the Misratans.

Bashagha has served unofficially as a representative of Misrata in the GNA and was central to the defense of Tripoli during Hifter’s year-long offensive against the city, repelled earlier this year.

His popularity has grown as he has criticized the GNA for corruption, and it’s becoming clear that Sarraj sees him as a threat.

The move also throws a wrench into hopes for a renewed peace process in Libya. Sarraj said on Aug. 21 said the GNA would halt its offensive as he called for a demilitarization of Sirte and withdrawal of foreign mercenaries from the country, in reference to Russian, Syrian and sub-Saharran African mercenaries. Eastern Libya’s government echoed the call, though Hifter’s military forces rebuffed it.

What’s next:  Sarraj has promised an investigation into Bashagha’s alleged conduct by Monday and Bashagha agreed, on the condition that its proceedings be televised to ensure transparency.

The United States has urged the two sides to reconcile. Sarraj is widely regarded as central to the GNA’s international legitimacy, and Bashagha to its security.

Know more:  Fehim Tastekin shows how Turkey’s blessing for Sarraj’s cease-fire call is a reluctant but necessary concession for now, and one that some factions supporting the GNA are less than enthusiastic about.