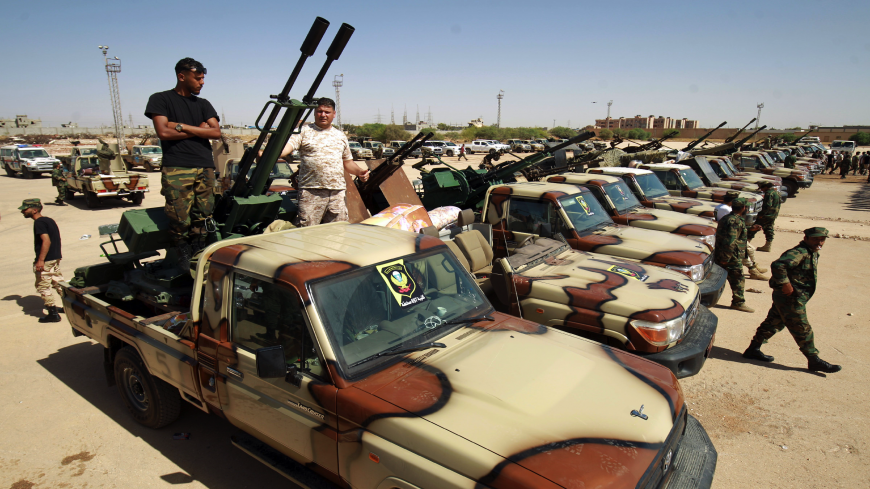 Members of the self-proclaimed eastern Libyan National Army (LNA) special forces gather in the city of Benghazi, on their way to reportedly back up fellow LNA fighters on the frontline west of the city of Sirte, facing forces loyal to the UN-recognized Government of National Accord (GNA), on June 18, 2020. - Photo by ABDULLAH DOMA/AFP via Getty Images

The spokesman for rogue general Khalifa Hifter’s self-styled Libyan National Army (LNA) rejected a UN-backed call for a cease-fire put forth by Libya’s Tripoli-based Government of National Accord (GNA).

Maj. Gen. Ahmed al-Mismari alleged Sunday that last week’s call for a cease-fire by western Libya’s Prime Minister Fayez al-Sarraj was a ruse. “There is a military buildup and transfer of equipment to target our forces in Sirte,” Mismari said during a press conference.

“If Sarraj wanted a cease-fire, he would have pulled his forces back, not advanced toward our units in Sirte,” Mismari said, adding that the LNA was prepared to fight any advance toward Sirte.

Mismari did not acknowledge Aguila Saleh’s acceptance on Friday of the GNA’s cease-fire invitation. Saleh, the head of eastern Libya’s parliament, is aligned with Hifter’s forces but has limited influence over them.

A day prior, western Libya’s High Council of State, an advisory council to the Tripoli-based government, ruled out any future political cooperation with “war criminal and terrorist Khalifa Hifter.”

The LNA’s cease-fire rejection is the latest setback in international efforts to stabilize Libya’s conflict. US officials have said a rare opportunity has emerged in recent weeks, as multiple rival foreign governments involved in the conflict — including Turkey, Russia and Egypt — expressed openness to working to settle the conflict.

Last week, Sarraj unexpectedly announced he had ordered GNA troops to stand down, just days after Turkey’s presidential spokesman and adviser, Ibrahim Kalin, told Al-Jazeera that Ankara was open to working with Russia to reach a political settlement in Libya.

Sarraj on Friday called for a demilitarization of Sirte, a restoration of Libya’s oil production and equitable sharing of oil revenues through the Tripoli-based National Oil Corporation.

Egypt’s President Abdel Fattah al-Sisi praised the call, after having threatened to militarily intervene if Sarraj’s side pressed its attack eastward toward Egypt’s border.

For months, the GNA, backed by Turkey’s military and Syrian mercenary fighters, had been vowing to redouble its counteroffensive that has rolled back Hifter’s eastern forces from the outskirts of Tripoli.

The GNA repeatedly vowed to assault the coastal city of Sirte and central Libya’s Jufra, both held by Hifter’s forces, unless the LNA withdrew from the areas. Mismari said last week the LNA would not withdraw from Sirte.