Libya's Tobruk-based government reciprocated a call for a cease-fire by the UN-backed government in Tripoli, in a potential breakthrough for peace. 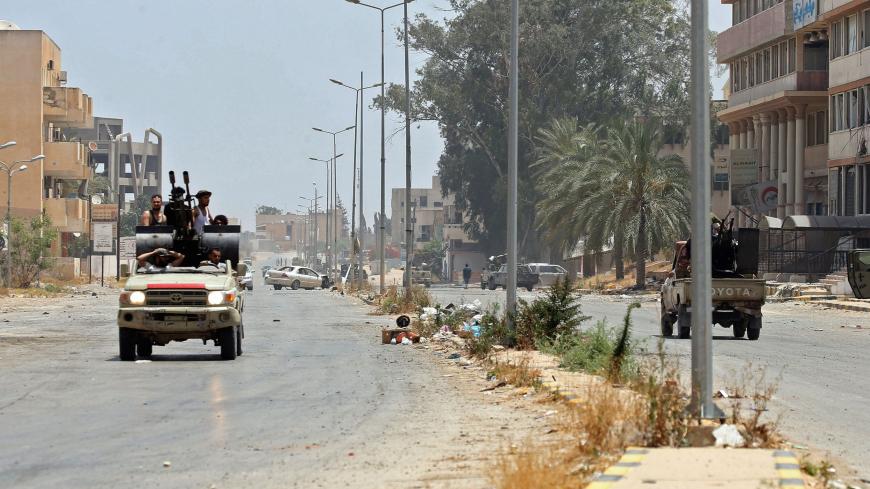 Fighters loyal to the UN-recognized Libyan Government of National Accord ride in a pickup truck mounted with turret along a road in the Qasr bin Ghashir district south of the Libyan capital, Tripoli, on June 4, 2020, after the area was taken over by pro-Government of National Accord forces following clashes with rival forces loyal to strongman Khalifa Hifter. - MAHMUD TURKIA/AFP via Getty Images

Prime Minister Fayez al-Sarraj of Libya’s Tripoli-based Government of National Accord called today for an immediate cease-fire in his side’s conflict with eastern Libya’s forces and a resumption of the fractured country’s political process.

The cease-fire call was reciprocated by Aguila Saleh Issa, speaker of eastern Libya’s parliament, in a move hailed by the United Nations.

Sarraj’s stand-down order reverses his government’s vow to press its counteroffensive against the coastal city of Sirte and airbase at Jufra, both held by eastern forces aligned with Gen. Khalifa Hifter.

“The final goal of the cease-fire is to restore complete sovereignty over Libya and expel foreign forces and mercenaries,” Sarraj said in a statement published online.

Sarraj’s announcement called for a withdrawal of foreign forces from Sirte, a restoration of Libya’s domestic oil production and for national elections to be held in March. The prime minister of the UN-recognized government also called for equitable sharing of oil revenue between the rival sides via the Tripoli-based National Oil Corporation.

Saleh issued a statement in support of the cease-fire and also voiced support for a resumption of production from Libya’s oilfields, most of which are under the influence of Hifter’s forces.

Hifter has not yet spoken publicly on the cease-fire announcement.

The move is likely to be well received by US and Germany, which have pushed for a resumption of talks to resolve the conflict. It is also seen as a reprieve for Egypt, which has threatened military intervention in Libya if Tripoli’s forces, militarily backed by Turkey, continue to advance eastward toward the Egyptian border.

Sarraj’s call came just days after a senior Turkish official unexpectedly softened his government’s rhetoric on the conflict, saying Ankara did not want to confront foreign fighters in Libya. Military hardware and contractors from Russia, as well as fighters from Syria and sub-Saharan African countries, are reportedly on the ground in support of Hifter’s forces, raising fears in Washington of looming international conflict over the North African country.

Turkey’s presidential adviser and spokesman Ibrahim Kalin told Al Jazeera on Monday that his government was open to working with Hifter’s backers Russia and Egypt toward a political solution to the fighting.

Kalin said Turkey would see a withdrawal of weapons and foreign mercenaries from Sirte and Jufra as a step toward resolving the conflict. Turkish officials had previously insisted the Government of National Accord would not halt its offensive until Hifter’s Libyan forces withdraw from Sirte and Jufra.

After turning back Hifter’s yearlong offensive against Tripoli, the Government of National Accord rejected an Egyptian-backed proposal for a cease-fire with Hifter’s forces in June.

The head of the UN’s political mission in Libya, Stephanie Williams, and the United States also praised the cease-fire. US Ambassador to Libya Richard Norland said last week that US officials had discussed with other governments the possibility of demilitarizing Sirte, and that he saw an opportunity for common ground with Sisi in pushing for a potential cease-fire.

Russia and the United Arab Emirates, which bankrolls Hifter's alliance, did not immediately comment.

So far, the rival Libyan sides have not articulated concrete plans for the fate of Sirte and Jufra. Sarraj’s statement calls for a demilitarization of the coastal city and joint security cooperation.

Ahmed al-Mismari, a spokesman for Hifter’s Libyan National Army, said today that its forces will not withdraw from the coastal city.