Eastern Libya’s parliament passed a motion approving a possible military intervention by neighboring Egypt to stop an offensive by Libya’s Tripoli-based government in the west. 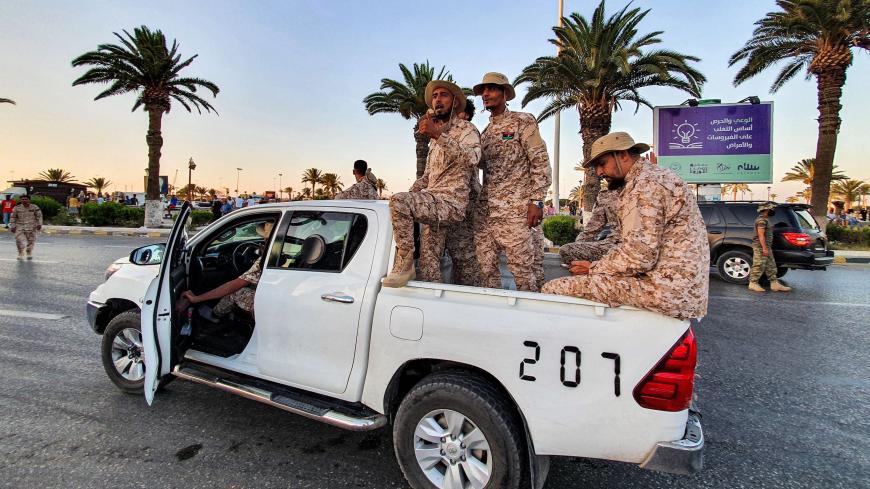 Members of the "Tripoli Brigade," a militia loyal to the UN-recognized Government of National Accord, sit in the back of a pickup truck as they parade through Martyrs' Square at the center of the GNA-held Libyan capital Tripoli on July 10, 2020. - MAHMUD TURKIA/AFP via Getty Images

Eastern Libya’s parliament passed a motion approving a possible military intervention by neighboring Egypt to stop an offensive by Libya’s Tripoli-based government in the west.

The House of Representatives in Tobruk, which is aligned with the forces of rogue Libyan Gen. Khalifa Hifter, passed the motion on Monday, asserting Egypt’s right to intervene militarily “to protect the national security of Libya and of Egypt if they see an imminent danger to our two countries."

The Tripoli-based Government of National Accord (GNA) called Sisi’s remarks last month a “declaration of war.”

Why it Matters:  An Egyptian military intervention would risk significant escalation in Libya’s conflict. The two sides’ foreign backers, most visibly Turkey and Russia, have continued to introduce fighters and weaponry into the war as the opposing sides have raised the stakes.

Egypt, the United Arab Emirates, Russia and France backed Hifter’s offensive against Tripoli launched last April, but Turkey’s intervention helped the UN-recognized Tripoli government reverse the general’s gains in recent months. Though Russia and the UAE have since expressed support for a cease-fire, there is no sign the rogue general’s foreign backers intend to simply abandon him. Apparently in response to Tripoli’s counteroffensive, Russia introduced fighter aircraft on Hifter’s behalf in May, reinvigorating the United States’ calls for a cease-fire.

Turkey’s Foreign Minister Mevlut Cavusoglu said earlier this week that the Tripoli-based government has no intention of negotiating until Hifter’s forces withdraw from the Sirte and Jufra.

What’s Next:  Despite some doubts about Egypt’s tactical capabilities, an intervention by Cairo would almost certainly hamper the GNA’s advance. It is also likely to embolden Hifter, whose side has been accused of resisting international pressure to restart the flow of oil from petroleum fields under the influence of his forces.

In a rare statement on Sunday, the United States threatened to sanction foreign parties to Libya’s conflict if they continue to “undermine the Libyan economy and cling to the military escalation.”

Should Tripoli’s forces get bogged down outside of Sirte and Jufra, the conflict could develop into a spending war by the opposing sides’ foreign backers. Following the US statement on Sunday, the UAE’s foreign minister tweeted that his country supports a cease-fire and a restoration of the oil flow if Tripoli ensures petroleum revenues will not be used to prolong the conflict.