Having failed to advance its military intervention in Libya, Ankara has grudgingly endorsed a cease-fire in the conflict, but its ambitions appear intact for the process down the road. 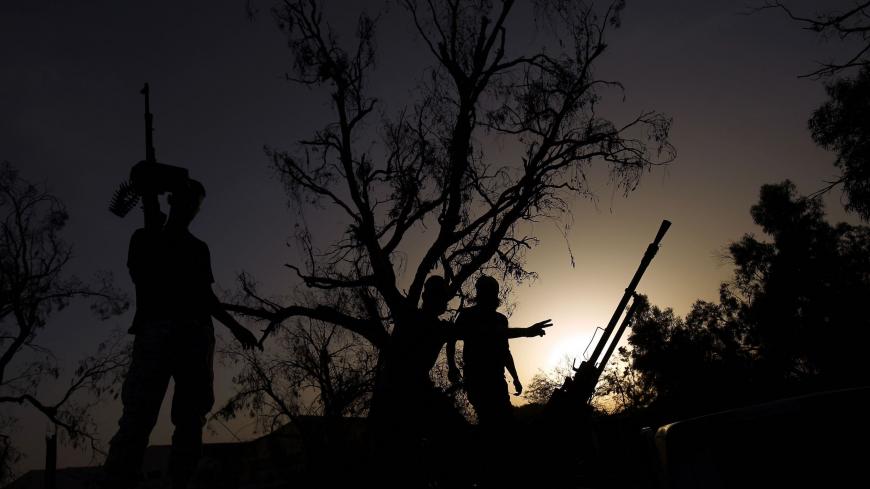 Members of the Salah Bou-Haliqa brigade, loyal to the country's east strongman Khalifa Hifter's self-styled Libyan National Army, celebrate as they arrive in the eastern city of Benghazi after seizing the central al-Jufra area from the Benghazi Defence Brigades coalition, a rival to Haftar's forces, on June 5, 2017. - ABDULLAH DOMA/AFP via Getty Images

Libya is debating a fresh cease-fire with both overlapping and conflicting terms by the warring parties, very much in the style of the blind men describing an elephant. In any case, the current equilibrium — the result of Turkey’s military intervention in favor of the Tripoli forces and the ensuing “red line” that Egypt and Russia set at Sirte and al-Jufra — is dictating a return to the negotiating table.

On Aug. 21, both Fayez al-Sarraj, the head of the Tripoli-based Government of National Accord, and Aguila Saleh, the leader of the rival House of Representatives in eastern Libya, called for a cease-fire following a flurry of diplomacy marked by German and American efforts.

Sarraj said the coastal city of Sirte, the gateway to Libya’s Oil Crescent, and al-Jufra, home to a key air base, should be demilitarized and placed under mutual security arrangements to achieve a viable cease-fire. The ultimate goal, he stressed, is to secure full sovereignty over Libya and the pullout of foreign forces and mercenaries. He called for the resumption of oil exports, provided that revenues remain untouched in a special bank account until a political settlement is reached in line with the terms of the Berlin Conference in January, and proposed presidential and parliamentary elections in March 2021.

Saleh, for his part, called for a new presidential council, based temporarily in Sirte, security forces from multiple regions to police the city, the freezing of oil revenues at the Libyan Foreign Bank until a settlement is reached in line with the Berlin Conference and the Cairo Declaration of June 6 under the auspices of the United Nations, the US administration and others backing peace and stability in Libya. The cease-fire, he said, should preclude any foreign military interventions and lead to the expulsion of mercenaries and the dismantling of militias to restore full national sovereignty.

While Egypt, the United Arab Emirates, Saudi Arabia, France and Italy quickly lent support to the cease-fire call, Turkey kept mum for a while. This silence, however, did not mean that Sarraj acted independently from Ankara. Only days before, the Turkish and Qatari defense ministers were in Tripoli, while President Recep Tayyip Erdogan and Foreign Minister Mevlut Cavusoglu held talks with their Russian counterparts. Sarraj’s interior minister said, “The cease-fire would not have happened without the support of the United States, Turkey and Egypt.”

Sarraj’s cease-fire call had Turkish consent, which shows Ankara has come to acknowledge that it can no longer achieve its objectives in Libya through military means. As recently as June, Ankara was insisting that Khalifa Hifter’s forces should withdraw from Sirte and al-Jufra, turning its nose up at the cease-fire initiative that Egypt’s president announced in Cairo in the company of Saleh and Hifter.

Turkey had hoped to fully upend the strategic balance in Libya by helping its allies reach the Oil Crescent and sideline Hifter from the game. But failing to do that, it had to acquiesce to the proposal to demilitarize Sirte and al-Jufra drawn up by Germany and the United States. Agreeing to have Saleh at the negotiating table as the political representative of the eastern forces, with Hifter pushed into a lower profile, is Ankara’s way of honorably getting off its high horse.

Not all in the Tripoli camp are happy with a cease-fire. The al-Samoud Brigade, for instance, rejected the truce, saying that Sarraj was too weak to lead a war and vowing to march on Sirte.

No doubt, a cease-fire and negotiation process in which the warring parties are not stakeholders stands little chance of success. Hifter lost much credibility after retreating from a 430-kilometer (267-mile) stretch, including the critical al-Watiya airbase, earlier this year. Consequently, Hifter’s partners sought ways to counterbalance him, with Russia promoting Saleh as an interlocutor and Egypt eyeing the support of Libyan tribes.

Hifter, who had ignored a series of cease-fire initiatives before signing up to Cairo’s appeal, is no longer seen as able to promise a military victory. Still, he remains in a position to sway the fate of the cease-fire. Wary of directly rejecting a truce backed by his allies, the eastern warlord has sought to cast doubt on the intentions of his opponents. A senior spokesman for Hifter said Aug. 24 that Sarraj’s initiative was “for public relations” and “written in another capital,” while making no mention of Saleh’s own cease-fire call. The spokesman claimed Turkish military officials and forces loyal to Sarraj had recently met at the Misrata Air Force Academy to prepare a fresh offensive on Sirte, with a number of forces relocated accordingly. “Are these moves and this mobilization for a cease-fire?” he said.

With the fighting in Libya already lulled in the past two months, Hifter could well refrain from making binding promises.

The same tactic of ambiguity applies to Ankara. Though its offensive option has waned, Turkey is likely to grab any opportunity for a thrust on Sirte and al-Jufra down the road. Moreover, the trails of Turkish military cargo planes show that Ankara’s plans to secure a lasting military presence at al-Watiya as well as a naval base and a land base in Misrata remain intact. Clearly, Ankara is keen to consolidate its military presence before settlement talks begin to secure a weighty place at the negotiating table. The Syrian Observatory of Human Rights has even claimed that a new group of Syrian fighters recruited for Libya had been taken to training camps in Turkey since the cease-fire calls.

Yet, the conditions dictating a cease-fire to the Libyan parties have similarly called in question Ankara’s ability to achieve its ambitious goals in Libya. Ankara has linked its policy in the simmering energy rivalry in the eastern Mediterranean to the Libyan war, betting on an absolute victory for the Tripoli forces.

The maritime demarcation deal that Erdogan reached with Sarraj in November is devoid of any legal value without the approval of the Tobruk-based House of Representatives. Moreover, the zone delimited in the deal is based on Libya’s eastern shores, which remain under Hifter’s control. Neither the maritime accord nor the planned allocation of military bases to Turkey is accepted by the eastern forces. The cease-fire calls involve the ultimate withdrawal of foreign forces, which concerns other countries such as Russia, but above all Turkey, which has transferred thousands of Syrian fighters to Libya, in addition to deploying its own military, intelligence and technical teams.

In the past two months, Russia markedly reinforced its presence in Libya, namely in Sirte, al-Jufra and al-Khadim, to deter Turkey. Moscow has withheld an official position on the cease-fire thus far, but it is always careful to leave itself room to maneuver.

The cease-fire was driven not only by the military standoff on the ground, but also by the drop in Libya’s oil revenues, a growing popular discontent, rifts emerging in the leaderships of both sides and the spread of the COVID-19 pandemic.

Since mid-January, Libya’s oil production has plunged to 100,000 barrels from 1.2 million barrels per day. With some $8 billion in revenues lost, economic conditions have worsened across Libya and popular protests erupted against Tripoli this week. The trigger of internal dynamics that could shake the Sarraj government is another bad omen for Turkey’s plans in Libya.