Can Malta’s diplomacy tip balance in Libya toward Turkey?

The diplomatic track ongoing between Turkey, Malta and Libya’s Tripoli government has sparked questions whether Valletta’s diplomatic support can serve as a much needed jumping point for Ankara to break the Libya stalemate, but the European country’s only focus in the talks seem to be limited with prevention of illegal immigration. 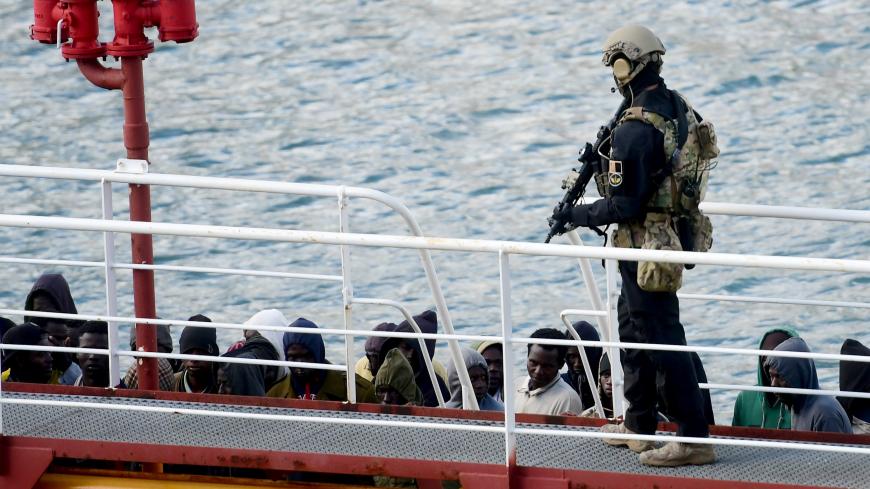 An armed policeman stands guard after migrants disembarked from the Motor Tanker El Hiblu 1 that was hijacked by migrants in Valletta's Grand Harbour on March 28, 2019, after Maltese armed forces took control of the vessel. - JONATHAN BORG/AFP via Getty Images

The latest surprise in Turkey's Libyan dossier has been Malta, an island state of some 316 square kilometers (122 square miles). After securing Malta’s support for Libya’s internationally recognized Tripoli government, Turkey is now hoping to use this cooperation to reach two major goals.

In getting Malta, the smallest country in the European Union, on board, Turkey is primarily aiming to stave off EU efforts led by France and Greece to block the Turkish moves in Libya.

Secondly, Turkey-Malta rapprochement may serve Ankara’s discreet quest to secure an airbase near Libya to counter a possible Egyptian military operation and expand its military operations in the war-torn country to break the deadlock over Sirte and al-Jufra.

Unable to provide steady air support from more than 1,500 kilometers (some 930 miles) away, Turkey needs to secure an airbase near or inside Libya. Despite its efforts to settle in al-Watiya airbase, which was seized by Turkish-backed Libyan forces in early July, the base remains vulnerable.

Three alternatives stand out: Tunisia, Algeria and Malta, but the fragile Tunisian politics do not serve Turkey’s agenda. Although Turkey’s Muslim Brotherhood allies in Tunisia's coalition government seem ready to support Ankara, the other political actors in the country staunchly oppose involvement in the conflict.

Algeria, despite maintaining good relations with Turkey, has remained against all foreign intervention in Libya. The remaining option is the EU member island of Malta some 355 kilometers (220 miles) north of the Libyan coast.

Yet, Malta’s possible green light for Turkey to use its airbases seems like a highly risky option for Valletta, given the earthquake the decision will set off in the European Union and the potential risks of making new enemies in the region.

Malta needs a powerful ally in Libya to prevent illegal immigration from Africa, which has seemed to be the sole focus of the Maltese authorities’ interest in the Libyan conflict. The support that Malta extended to the UN-recognized Government of National Accord (GNA) does not pose any political risk for Vellatta, despite the controversy surrounding the legitimacy of the former. But taking a side in the military conflict is a whole different matter.

The second gathering on Aug. 6, however, had a more diplomatic appearance with Turkish Foreign Minister Mevlut Cavusoglu and his Maltese counterpart Evarist Bartolo meeting with the GNA’s head Fayyez al-Sarraj and other officials in Tripoli.

The joint statement issued after the meetings confirmed Valletta’s focus by emphasizing efforts to prevent illegal immigration. Valletta and Ankara also confirmed their support for the Tripoli-based government and opposition to a military solution to the conflict, as well as agreement to cooperate on preventing illegal immigration, strenghtening the capabilities of the Libyan Coast Guard and resumption of flights between Libya and Malta and Turkey.

Unable to receive the support it desired from the European Union on immigration and burden-sharing issues, Malta’s rapprochement with Turkey may cajole the bloc’s major actors into extending broader support to the union's smallest country. However, Turkey’s game plan that involves military support is too risky for Vellatta.

For Ankara, Valletta’s support may come handy to ease Turkey's isolation at a time when tension with Greece is escalating, but Malta’s support wouldn’t tip the balance of power on this front either.

Essentially, all Turkey’s Libya moves have been facing a test in the wake of the failure to break the Sirte and al-Jufra stalemate — both locations are key to controlling Libya’s “oil crescent” region and currently under the control of eastern commander Khalifa Hifter’s forces backed by Egypt, Russia and the UAE.

As the Tripoli government’s long awaited offensive against the Hifter’s Libyan National Army lags, some in the GNA government have begun to question the real value of partnership with Turkey.

Although the GNA regards the military achievements, made possible by the Turkish military support it garnered by accepting Ankara's terms, as significant, this support has not secured the capture of Sirte al-Jufra, the key locations on the way of the country’s oil crescent region which contributes 60% of Libya’s oil exports.

Officials from the Tripoli government disclosed that Sarraj initially resisted a controversial maritime deal that his government signed with Turkey in November on the grounds that it was beyond his jurisdiction, but that he was pressured into signing it by the Islamist members of his government. The maritime deal was one of Turkey's conditions for the military-security cooperation agreement with the Sarraj government, which paved the way for Turkish military support for the GNA forces.

Speaking to the Associated Press on July 30, an official in the Tripoli government said that Sarraj had reluctantly agreed to the maritime deal because he believed he had no other option. “It was like a give-and-take game. They took advantage of our weakness at the time,” the official quoted as saying.

There are several causes of the stalemate and the GNA’s discomfort with the maritime deal: Egypt’s declaration of Sirte and al-Jufra as red lines, Saudi support for Egypt’s cease-fire plan, Russia’s reactivation of the mercenary Wagner Group in Libya, Algeria’s firm stance against foreign intervention, American reluctance to interfere in the conflict despite US support for Turkey’s position against Russia, problems with the thousands of Syrian fighters that Turkey transferred to Libya and not least, the hefty bill Ankara has demanded from the Tripoli government to compensate for the losses of Turkish companies operating in Libya. All of these issues have led the GNA to question whether Libya has benefitted from the give-and-take. Turkey’s use of naval bases in Misrata and Watiya have the potential to spark further problems between the Tripoli government and Libya’s neighbors.

Even though Ankara has seen a foothold in Libya as key to its calculations in North Africa and the eastern Mediterranean, this strategy’s benefits for Turkey remain questionable as the controversial maritime deal between Ankara and Tripoli necessitates the capture of eastern coastline of Libya.

Turkey needs the GNA to take control of Sirte and the other eastern provinces. The boundaries of the maritime zone between the two countries draw a line between the Turkish coastline around the port of Antalya and the Benghazi-Tobruk-Derna stretch of the Libyan coast.

The Aug. 6 maritime deal between Greece and Egypt indicates that the two sides are now engaged in a diplomatic battle via their respective maritime agreements.

As the Libyan conflict has reached a near deadlock, whether Turkey can cultivate an effective strategy with Malta remains an open question, especially at a time when Italy, which supports the Tripoli government, has aligned with France and Germany on EU sanctions against Ankara.

Malta’s withdrawal from the EU marine mission to enforce an arms embargo on the Libyan conflict might be a positive sign for Turkey, which provides military support to the Tripoli government, but Valletta's support won't be enough to change the current trend against Turkey.