Despite cease-fire calls in Libya, Turkey and its allies might be readying for a push toward the strategically important areas of Sirte and al-Jufra next month. 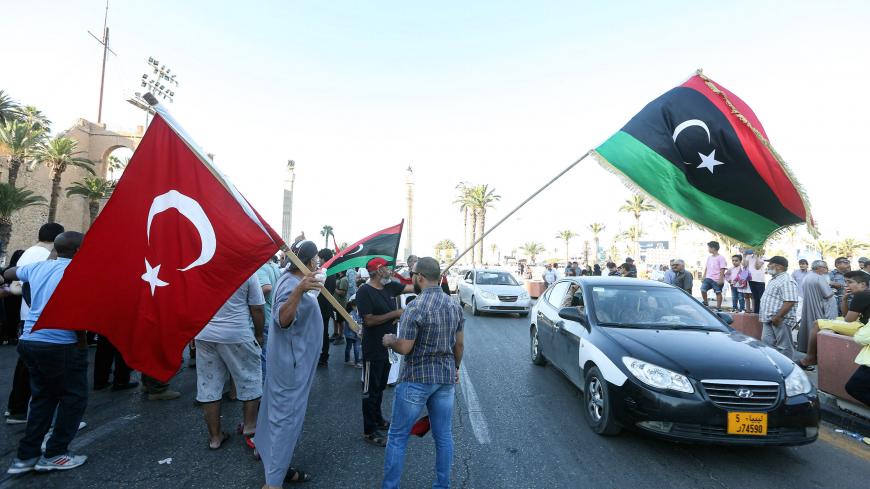 People wave flags of Libya (R) and Turkey (L) during a demonstration in Martyrs' Square in the center of the Libyan capital, Tripoli, June 21, 2020. - MAHMUD TURKIA/AFP via Getty Images

Is Libya headed for a conventional military confrontation between Turkey and Egypt as rivalry over the oil-rich Sirte area and the strategically significant al-Jufra base heats up? Despite cease-fire calls from Moscow and others, Ankara’s operational preparations suggest that its allies in Libya — the forces of the Tripoli-based Government of National Accord — might attempt to advance toward Sirte and al-Jufra in the second half of July.

Aguila Saleh — the head of the Tobruk-based parliament, which has backed Khalifa Hifter’s Libyan National Army — said June 24 that they would ask Egypt to intervene militarily if the key coastal city of Sirte came under attack. On June 20, Egyptian President Abdel Fattah al-Sisi claimed that Egypt had a right under the UN Charter for military action in Libya to protect its western borders. He warned against military moves to seize Sirte and al-Jufra, which he called a “red line” for Egypt’s national security.

Sirte is the key for controlling Libya’s “oil crescent” region, which contributes 60% of Libya's oil exports. Sirte, which has crucial oilfields and tanker-loading facilities, is of military significance as well, being a garrison city that allows control of the Libyan coastline between Tripoli to the west and Benghazi to the east.

Al-Jufra, for its part, is home to an air base that allows domination of the entire Libyan airspace, in addition to being a key route linking the country’s south to the coastline. In sum, having a say over al-Jufra means having a say over the whole of Libya.

According to the US Africa Command, at least 14 Russian-made MiG-29 and Su-24 warplanes have been recently transferred to al-Jufra. Also deployed at the base are Russian-made Pantsir air defense systems and mercenaries of the Russian Wagner group.

Al-Jufra is also a major train-and-equip base. African mercenaries from countries such as Sudan and Chad, recruited by Hifter’s forces, undergo brief trainings at the base before heading to front lines in the west to fight the Government of National Accord forces.

The Government of National Accord wants Hifter’s forces to return to the boundaries of the UN-brokered Skhirat agreement of December 2015, that is, to withdraw from Sirte, al-Jufra and Fezzan. The government maintains that a lasting cease-fire will be impossible unless Hifter’s forces retreat from Sirte and al-Jufra, a position that is strongly backed by Turkey. For Hifter, however, the Skhirat agreement is already a “thing of the past.”

Will Turkey encourage its allies to march on Sirte and al-Jufra despite the Egyptian threat of intervention and the risk that Russia will blackmail Turkey in Syria’s Idlib? Could Turkey brave a conventional military power struggle against Egypt and Russia in Libya without fueling military tensions with Russia in northern Syria?

Turkey’s intervention in Libya has divided NATO, with France leading the anti-Turkey bloc within the alliance amid rising bilateral tensions over Libya in particular and the eastern Mediterranean in general. In furious comments June 22, French President Emmanuel Macron accused Turkey of playing a “dangerous game” in Libya that can no longer be tolerated. “And I'll take you back to my statement last year on NATO being brain dead. I think this is the best example of it,” he said.

The United States, Italy and Germany, meanwhile, hope that Turkey’s military activism in Libya will hamper Russia from obtaining permanent military bases in Libya and using the country as a linchpin to expand its influence in Africa. Hence, they have adopted stances that indirectly encourage Turkey’s military posture in Libya. Increasing Ankara-mediated contacts between Government of National Accord head Fayez al-Sarraj and Washington suggest that Turkey is working hard to influence the US position in Libya.

While the conflict appears bound to heat up in July, is a Turkey-backed Government of National Accord offensive on the Sirte-al-Jufra axis on the cards? Intentions and capabilities matter.

In terms of intentions, Ankara appears fully resolved to press ahead. The prevailing thinking in Ankara is that Egypt could conduct some token military exercises and border patrols at its Libyan frontier, but could never brave a conventional military intervention. In the words of a Turkish journalist close to intelligence services, Ankara’s response to Sisi and the United Arab Emirates, Hifter’s chief allies, has amounted to this: “We are not taking you seriously. Let’s see what you can do!”

In terms of military capacity, however, Ankara is faced with some serious downsides.

First of all, medium- and high-altitude air defense is vital for air dominance in the Sirte-al-Jufra axis, but this remains a problem for Turkey, though low-altitude air defense has been secured through the deployment of the Hisar air defense systems to Libya. Paradoxically, Ankara owns more advanced systems — the S-400s it acquired from Russia last year — but has failed to activate them so far and transferring them to Tripoli is out of the question. And, at least for now, Washington appears reluctant to wrangle with Russia over airspace dominance in Libya. Hence, Ankara has to plan an offensive without medium- and high-altitude airspace control, a constraint it has already experienced in Syria. This would be a very risky business if Moscow and Cairo stand their ground.

Providing close air support to ground forces with combat planes, attack helicopters and armed drones is essential for military success — something the Turkish army has relearned the hard way in the 72-day siege of al-Bab during Operation Euphrates Shield in northern Syria in 2017 or, as a matter of fact, in Tripoli at present. Bereft of close air support, Ankara will have to make the most of indirect fire support from the Storm howitzers and multiple rocket launchers it has deployed to Libya and armed drone attacks. Obviously, indirect fire support and drone attacks cannot substitute for close air support as Turkey’s drone capability falls short of decisively deterring its adversaries, no matter how much it has grown in recent years.

Also, the A400M planes — the largest airlifters the Turkish military owns — lack the capacity to transfer units of battalion size or larger and bulky military equipment. The absence of a strategic airlifter such as the C-17 Globemaster or the Ilyushin Il-76 in the Turkish air force inventory has been a pressing liability, but Qatar’s C-17 assistance has relieved Turkey thus far.

Another potential constraint stems from Government of National Accord deficiencies in terms of an effective high command and staff officers. The deployment of Turkish generals and staff personnel to Libya appears to have largely filled the vacuum, but an offensive to capture Sirte and al-Jufra would require closer coordination between drones and ground elements, increased capabilities in intelligence, surveillance, target acquisition, reconnaissance and command and a precision strike capability.

Because of limited combat radius, Turkey’s F-16 jets — its only tactical assets in terms of air supremacy — need multiple air refueling to fly to Libya. Forward basing could have been an option, but both Algeria and Tunisia have been reluctant to offer such assistance. Government of National Accord-controlled air bases are incapable of supporting intensive operations by NATO-standard aircraft and would be in the crosshairs of Hifter’s forces anyway. Also, Turkey lacks heavy bombers that could deliver overwhelming firepower in Libya. How the Turkish air force would secure its area of operation against possible interventions by Egyptian or Emirati planes is another problem that Turkish military planners must consider, even though Ankara tends to believe that neither Egypt nor the UAE would brave such action.

To make up for the air force’s logistical limitations, Ankara could have considered the alternative of naval aviation. Yet Turkey’s first amphibious assault ship, the TCG Anadolu, is not expected to become fully operational until late 2020. Moreover, Turkey has been ousted from the F-35 program. Without the F-35B jets, the Anadolu’s naval aviation capabilities are reduced to helicopters and Akinci armed drones, expected to enter service early next year. In other words, the Turkish navy could hardly compensate for the air force, even though the Anadolu — designed to accommodate 1,450 people and sail for 50 days without resupply at 22 ­knot speed — promises to be a game changer for Turkey in the eastern Mediterranean.

Furthermore, a failure to match military efforts with diplomacy could prevent operational achievements from translating into sustainable diplomatic gains.

Last but not least, many in Ankara have come to question to what extent the ailing Turkish economy could sustain costly military ventures abroad and the defense industry, a concern that bears directly on Ankara’s military activism in Libya.