Is proxy war turning to conventional confrontation in Libya?

Albeit late, Turkey seems to have finally understood the importance of diplomacy in Libya. 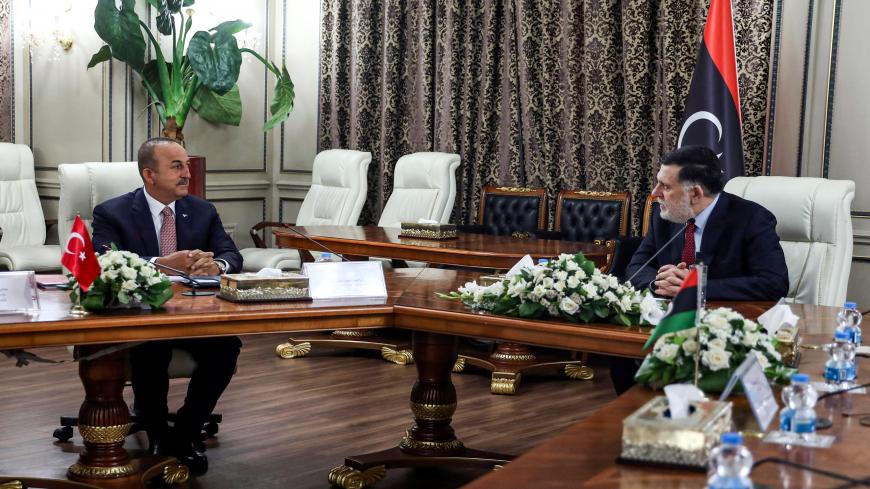 Tension in the Libyan battlefield over the country’s oil-rich Sirte province and strategic al-Jufra air base has further escalated after the military command of the internationally recognized government declared three areas near Sirte as a military zone, a further signal that the Turkish-backed Government of National Accord (GNA) forces are preparing for a new military push.

The commander of the Sirte-Jufra Protection and Security Operations Room reiterated more than once that the GNA forces were ready to enter Sirte, pending Fayez al-Sarraj's orders as the chief commander of the Libyan army, despite Egyptian President Abdel Fattah al-Sisi's threats that Sirte province and al-Jufra air base are Cairo’s “red lines.”

The declaration came after intense contacts between Turkey and its Libyan ally the GNA that fights against Egypt-backed Khalifa Hifter’s Libyan National Army (LNA). On July 3, Turkish Defense Minister Hulusi Akar and Turkish Chief of General Staff Yasar Guler paid an unscheduled visit to Libya. In addition to their meeting with GNA head Sarraj, the Akar-led Turkish delegation also met with the GNA’s deputy defense minister, chief of general staff and commander of the Libyan naval forces. Akar also visited Mitiga air base and two Turkish frigates off the coast of Libya. The defense circles in Ankara view the visit as a way to gauge the GNA forces’ readiness level ahead of looming Sirte and al-Jufra operations.

The response of the GNA’s rivals to Akar’s high-profile visit was swift. Only hours after the Turkish defense minister's visit, the MIM-23 Improved Hawk air defense system deployed by Turkey in the strategically located al-Watiya air base was hit in an air attack. No casualties were reported, but the system that was deployed in three different corners of the base was damaged. The GNA forces seized al-Watiya air base, which is located some 125 kilometers (78 miles) south of Tripoli near the Tunisian border, breaking the LNA’s 14-month long blockade around Tripoli and forcing its forces to retreat.

The attack on al-Watiya can be seen as a test to gauge the capabilities of the Turkish air defense system in Libya. The system failed the test, which indicates that the area south of Tripoli is not under full aerial control of Turkey, and that the air space dominance over the region is contested. This situation is upsetting for Turkey as it reveals Ankara’s vulnerability in the region.

The fact that the perpetrators of the attack remain unidentified is another setback for Ankara. According to Turkish sources, there are four different scenarios as to how the attack took place.

The attack might have been carried out by Russian MIG-29 or Su-24 jets that departed from al-Jufra air base some 550 kilometers (342 miles) north of the region. Yet this is highly unlikely as Russia would avoid directly confronting Turkey given its ongoing cooperation with Ankara in Syria and in other fields.

Another possibility is that Mirage, Rafael or F-16 jet fighters from Egypt or the United Arab Emirates (UAE) carried out the attack, taking off from Egypt’s Sidi Barrani base that is located in the west of Egypt, some 1,350 kilometers (839 miles) from the area. Although this may seem a feasible scenario considering Cairo's increasingly aggressive attitude toward Ankara, it is hard to believe that Egypt would dare to take such an action that could lead to a direct confrontation between the two countries.

The attack could also have been carried out by French Mirages taking off from Faya-Largeau air base in Chad, some 1,780 kilometers (1,106 miles) south of the area. Yet this scenario is very unlikely not just because of the distance between Faya-Largeau and al-Watiya, but also because France would want to avoid an open conflict with Ankara over Libya, at least for now.

Regardless, the attack on al-Watiya air base stands out as a worrisome development because it shows that the ongoing proxy warfare in Libya can swiftly and uncontrollably turn to conventional military confrontation.

There are four possible reasons for Ankara’s silence in the wake of the attack. First, Ankara may be avoiding escalating the situation by retaliation. Second, Ankara may be trying to test Moscow's reaction to the attack on al-Watiya. The lack of support from the United States and European countries to a possible Turkish retaliation can be another reason. Or Ankara may simply be trying to keep its focus on the ongoing preparations of the looming Sirte and al-Jufra operation.

One thing is clear, Ankara’s determination for the Sirte and al-Jufra operation still remains intact. Akar and Guler’s seemingly satisfied departure from Libya show that the preparations for the operation have been finalized, which means that Ankara does not have any operational concerns. However, problems on the diplomatic front are likely.

The major diplomatic problem is Russia’s increasing military activity in Libya in response to Turkey’s actions. Turkey, in turn, has not secured the support it has been trying to get from the European countries, particularly from Italy and Germany.

Indeed, Libya topped the agenda of Italian Foreign Minister Lorenzo Guerini’s surprise visit to Ankara July 6. Reportedly, in addition to the diplomatic support, Turkey has also asked for Italy’s military support in a meeting that lasted almost four hours between the Italian minister and Akar. Setting up a no-fly zone in the Tripoli-al-Jufra-Sirte triangle, supporting the Turkish navy’s anti-access area denial efforts in the eastern Mediterranean and pressuring the French might have been among the demands expressed by the Turkish side.

Apparently, Ankara has finally accepted the fact that its military capabilities in the Libyan battlefield, proxy warfare techniques and its armed TB2 Bayraktar unmanned aerial vehicles are not enough for the new military operation and thus has begun to look for new allies. However, too occupied with unilateral military moves, Ankara has been late on the diplomatic front.