Turkey untroubled by conflict with Egypt, UAE in Libya

Ankara believes a large-scale Egyptian ground operation is highly unlikely in Libya, considering the likely dynamics of power struggles in the skies of Sirte and al-Jufra, between tribes in southern Libya and on air and naval logistical routes between Libya and Turkey. 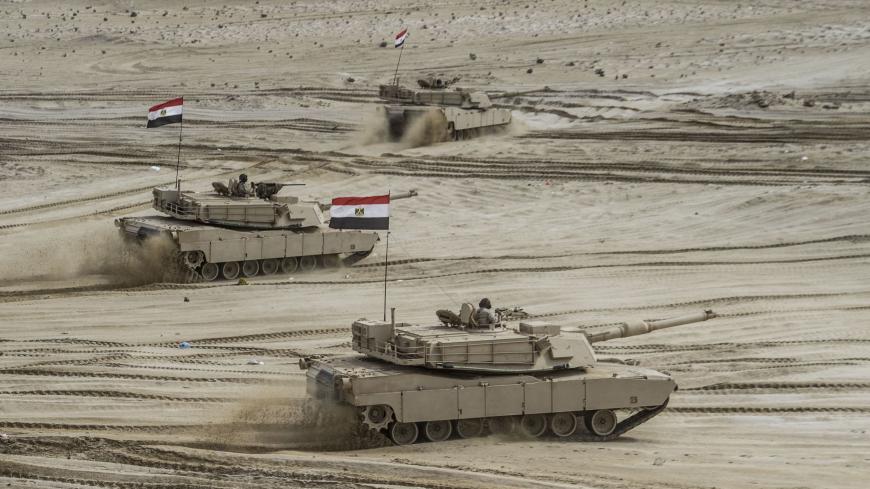 Egyptian tanks take part in the Arab Shield joint military exercises at Mohamed Naguib military base in El-Hamam near the Mediterranean coast, northwest of the capital Cairo on Nov. 15, 2018. - KHALED DESOUKI/AFP via Getty Images

Armed with parliamentary approval for cross-border military action, Egyptian President Abdel Fattah al-Sisi has full authority to intervene in neighboring Libya, a prospect that could lead to a conventional military confrontation between regional rivals Egypt and Turkey, which back opposing sides in Libya's proxy war.

Strategic planning in Ankara focuses on a three factors: Egypt’s ground, air, naval and proxy capabilities, its actual willingness for intervention and the international context.

Ankara believes Egypt’s land forces are too weak for a large-scale ground operation and security sources interviewed by Al-Monitor unanimously dismiss the prospect. Egypt’s shortcomings in the fight against the Islamic State in the Sinai Peninsula, Ankara reckons, show that its land forces lack much capacity in low-intensity conflicts as well. Another prevailing view is that the Egyptian army is haunted by a “strategic trauma” around foreign ventures after its failed intervention in Yemen in the 1960s, often referred to as “Egypt’s Vietnam.” In sum, Ankara seems to confidently rule out a comprehensive ground operation by Egypt in Libya.

The lessons from the Arab-Israeli wars in 1967 and 1973 and military trends since the 1990-1991 Gulf War show that any large-scale military operation in a terrain with vast deserts like Libya would need a certain degree of air superiority and close air support. Hence, Ankara is preoccupied with whether Egypt will receive open or covert air support from the United Arab Emirates, its chief ally in Libya, and Russia.

Security problems in Sinai and rows with neighbors may be weighing on Cairo, but a limited Egyptian-Emirati air campaign is possible to stop the Turkish-backed Tripoli forces from taking the strategically crucial coastal city of Sirte and Libya’s largest air base, al-Jufra.

The attack on the Turkish-controlled al-Watiya airbase in early July was arguably a prelude to a struggle for airspace dominance in Libya.

Turkish air operations in an offensive to seize Sirte and al-Jufra, which Ankara and its allies have declared as their next targets, could theoretically unfold on three main legs. The first would be the deployment of warplanes in Libya or in a third country such as Malta, from which the jets could reach Libya without air refueling, to provide close air support to ground forces. The second would be the use of air defense systems, including surface-to-air missiles, and electronic warfare means to prevent opposing forces from accessing the route of the offensive. The third would focus on securing aerial and naval logistical corridors between Turkey and Libya. Likewise, those three areas would be the main targets of Egyptian and Emirati air forces.

Judging by the attack on al-Watiya, Ankara sees a strong likelihood that Emirati jets would try to prevent an offensive on Sirte, backed by Egyptian logistical support and Russian airspace control.

Military databases indicate that the UAE has about 160 fighter jets and multi-role warplanes, mainly US-made F-16Es and F16F Block-60s, but also French-made Mirage jets. According to open-source intelligence, the UAE has stationed Mirage jets at Egypt’s Sidi Barrani base, not far from the Libyan border, and reinforced the al-Khadim base in eastern Libya with hangars and infrastructure suitable for sophisticated jets. Less advanced aircraft such as AT-802 light attack planes and Chinese-made Wing Loong drones have been deployed at the base so far, probably because of operational risks and the lesser harm to bear if they are shot down, both financially and in terms of media impact.

The use of al-Khadim and Egyptian bases would provide a significant sortie advantage to Emirati aircraft even if Egypt’s air force is not actively involved in combat. Such an advantage could turn up pressure on the Turkish-backed Tripoli forces and facilitate deep-strike attacks on Tripoli, which apparently lacks a proper air defense. Of note, the Emirati air force possesses the smart, long-range ammunition required for such missions.

Likewise, Egyptian and Emirati forces might try to disrupt the aerial and naval logistical routes between Turkey and Libya, which are 2,300 kilometers (1,430 miles) apart. Continued supplies, troop transfers and evacuations would be a tough logistical task for Turkey on such a long route.

In short, the air power dimension is the most challenging for Ankara.

How willing Egypt is for a military intervention? Ankara believes that Cairo’s posturing is mostly for domestic consumption, intended to divert attention from its failure to deter Ethiopia in a water dispute on the Nile and poor handling of the COVID-19 pandemic. According to Ankara’s assessment, an Egypt struggling to cope with a few terrorist groups in the Sinai could hardly take a major risk in Libya and even if it does, its likely defeat could precipitate the end of the Sisi regime.

Also, unlike Yemen and Syria, Libya remains the focus of global attention and Turkey’s ally, the Government of National Accord, enjoys international legitimacy, boosted by a series of recent military victories that, in Ankara’s thinking, virtually preclude a Sisi-backed intervention with potentially extensive bloodshed.

Furthermore, Ankara believes, Sisi’s willingness alone is not enough. Sisi may be eager for an intervention, hoping to boost his popularity in the Arab world and sustain the UAE’s financial backing, but Ankara doubts the Egyptian military shares his eagerness. According to Turkish assessments, Egypt’s military would be reluctant to engage in a cross-border campaign with ambiguous military goals and risk losses that might damage its credibility and fuel internal rifts.

In the international context, Ankara is well aware that it needs European political backing, especially from Italy, Germany, Britain and Spain, and logistical support from Malta and Maghreb countries to move on Sirte as well as US support to balance Russia in Libya. It has stepped up diplomatic efforts, seeking to capitalize on discords among EU countries on Libya and the US military’s concerns over Russian presence in the country.

Above all, however, Ankara believes that Egypt cannot intervene without a nod from Washington — something it sees as a distant possibility due to Egypt’s alignment with Russia.

In terms of proxy warfare, Egypt appears to be quite active. Since early June, it has reportedly stepped up efforts to arm Libyan tribes. This activity speaks of a plan to organize armed resistance on a local level to impede the advance of the Tripoli forces should they attempt to march on Sirte and al-Jufra.

It is not hard to guess that an Egyptian military intervention would rely on Emirati financing. Yet Cairo might face other downsides in terms of capacity. The distance between Egypt and Libya, the duration, endurance and continuity of the intervention and the need to win public and international support all have to be factored in. Sisi’s efforts to bolster Egypt’s military capabilities have relied on foreign purchases, an important downside. Any sanctions by Western countries or Russia could impair the endurance and continuity of the intervention.

All in all, Ankara believes an Egyptian intervention would be an irrational endeavor, given Cairo’s handicaps and international conditions, although the Egyptian military has the capacity for such a move. If Sisi is determined to go ahead, he would be undertaking a venture with a fragile military rationale and unforeseeable consequences for both Libya and Egypt.