The descendants of Ottoman Turks represent an important foothold for Turkey in Libya, but the community is dispersed in various political and military camps, with some even resentful toward Ankara. 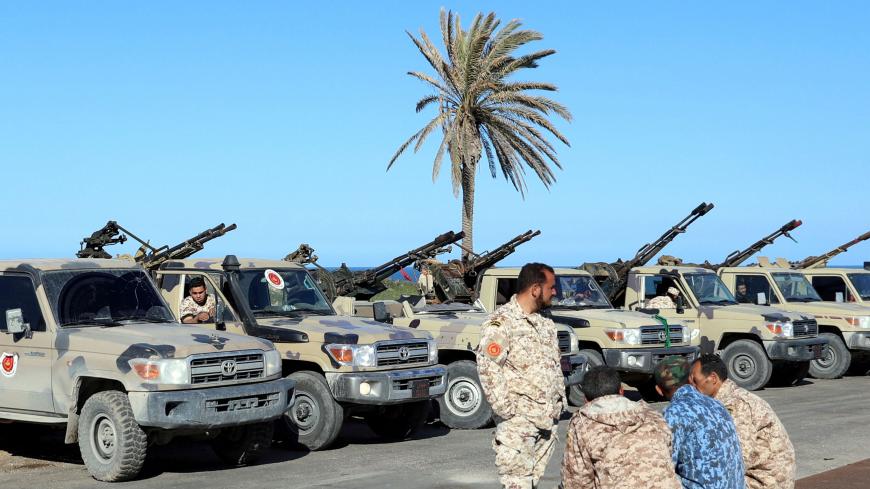 For enthusiasts of adventures in former Ottoman lands, Turkish connections are easy to find across the region. In Iraq and Syria, for instance, the Turkmen minorities have long been seen as handy mediums of Turkish influence, though the realities on the ground have sometimes defied the expectations — like the affinity some Iraqi Shiite Turkmens feel toward Iran and the collaboration of some Syrian Turkmens with Damascus or the Kurds.

Recently, the role of the offspring of Ottoman Turks in Libya has become the subject of increased interest as the war in the country rages on, apparently with growing Turkish involvement. Ankara has thrown its weight behind the Tripoli and Misrata forces fighting the Libyan National Army of Khalifa Hifter, backed by Egypt and the United Arab Emirates.

Those taking comfort in nostalgia would muse how much Misrata’s rebellion against former dictator Moammar Gadhafi and its current resistance against Hifter owe to the descendants of Ottoman Turks or how “the grandsons of Mustafa Kemal’s comrades-in-arms keep the 1911 spirit alive” — a reference to battles against the Italian invasion of Libya, led by the would-be founder of modern Turkey.

But what role do Turco-Libyans actually play in Libyan politics? Does their presence justify Turkey’s intervention?

The fact is that Turco-Libyans are highly fragmented both politically and militarily. In 2015, some of them founded the Libya Koroglu Association as a reminder of their presence. The Turkish government, however, had its own way of remembering them. To put it more directly, Ankara chose to collaborate with the Muslim Brotherhood and influential figures. Turco-Libyans averse to Islamist groups did not figure on Turkey’s radar. Those who did share a common feature — almost all of them were enemies of Hifter.

The offspring of the Turks who settled in Libya over three centuries after the Ottoman conquest in 1551 today live mainly in Misrata, Tripoli, Zawiya, Benghazi and Derna. The term “Kuloglu,” or “sons of servants” — often Anglicized as Koulouglis — describes the offspring of Ottoman soldiers who married North African women. In local dialect, the term has in time evolved to “Koroglu.”

A member of the Libya Koroglu Association, told Al-Monitor Koroglus number some 1.4 million and are concentrated especially in Misrata, where they make up three-fourths of the city’s population. The figures appear inflated, requiring scientific verification. In any case, counting those bearing Turkish blood is not easy, given that their Turkish ancestries have been diluted over the years and few of them speak Turkish today. As the Ottomans withdrew from Libya, some of the Libyan Turks migrated to Turkey where, curiously, they came to be called “Libyan Arabs.” In 2011, the Association of Turks with Libyan Roots was established in the western city of Izmir.

In the Gadhafi era, Misrata was treated as an outcast. High-level positions were off-limits to Turco-Libyans, who engaged mostly in trade, truck freight, construction, real estate, repair and small-scale industries. When the uprising erupted in 2011, Misrata became “the bastion of resistance,” and Turco-Libyans figured prominently in the war.

One of the spearheads — Wissam Bin Hamid — was a Misratan auto mechanic working in Benghazi before he turned into a fighter and rose to the commanders’ ranks in the Libya Dawn. He backed the political agenda of the Muslim Brotherhood but became controversial for collaborating with the al-Qaeda-linked Ansar al-Sharia.

According to the official, however, Bin Hamid had no history with Islamist groups but was used by them and killed as he attempted to act independently, for he knew too many secrets of the Islamists. Bin Hamid, who fought on the anti-Hifter camp, was reportedly wounded in December 2016 in an airstrike by Hifter’s forces and killed in a second strike after he made his location known in a phone call seeking help. His comrades blame the Muslim Brotherhood for his death because the last person Bin Hamid contacted was Ismail al-Sallabi, the brother of Ali al-Sallabi, a key connection between the Brotherhood and Qatar.

Another militia leader from Misrata is Salah Badi, a senior commander of the al-Somood Front. Badi, who was a soldier in Gadhafi’s army, grew into a “revolutionary hero” in 2011, was elected to parliament in 2012, backed the National Salvation Government affiliated with the General National Congress and fought against Hifter in the Libya Dawn ranks before moving to Turkey in 2015. In 2018, he abruptly returned to Libya and declared war on his former allies, vowing to “cleanse Tripoli of the crooks.” As a result, he landed on the lists of individuals under UN and US sanctions. Though he has challenged the authority of Fayez al-Sarraj, the head of the Government of National Accord (GNA), Badi has remained an enemy of Hifter.

The armed conflict transformed Misratan truck driver Mukhtar al-Jahawi to a commander of the Anti-Terrorism Force. He fought against the Islamic State in the Sirte region, keeping his distance from Turkey and Qatar.

Another Misratan militiaman of Turkish descent is Abdul Rauf Kara, leader of the Special Deterrence Force, or RADA, which controls the Mitiga airport and is known for cracking down on alcohol, drugs and smuggling in Tripoli. He belongs to the Salafi Madkhali movement, which has grown into a major force across Libya. As such, he is naturally a Saudi ally. Unlike Madkhalis in other areas, however, Kara has stood up against Hifter’s onslaught on Tripoli.

Another prominent Misratan is Fathi Bashagha, who heads the Interior Ministry — to which some of the militia are bound “by contract.” The minister, who wields influence over the Mahjoub and Halbous brigades in Misrata, is the Brotherhood’s man in the government and has strong bonds with Ankara. Despite his Turkish surname, some claim he is of Bedouin descent.

A key figure holding sway behind the scene is Ali al-Sallabi, also a Turco-Libyan from Misrata. He is the Libya representative of Qatar-based Egyptian cleric Yusuf al-Qaradawi and coordinates the arms and money assistance coming from Doha.

Mohamed Sowan, leader of the Justice and Construction Party, the political wing of the Brotherhood, is also of Turkish descent. For Misratans averse to the Brotherhood, he is “Erdogan’s man in Libya.”

Abdel Rahman al-Suwayhili is another example of the varying political stripes among Turco-Libyans. The grandson of Ramadan al-Suwayhili, a co-founder of the short-lived Tripolitanian Republic in 1918, served as a parliament member in the GNC and headed the High Council of State before creating his own party, the Union of the Homeland. He is on good terms with the Brotherhood. His nephew, Ahmed Maiteeq, served briefly as prime minister in 2014 before becoming GNA deputy premier in 2016.

In sum, the Turco-Libyans are not a homogenous force on the political and militia scene. Those who uphold the Turkish-Koroglu identity believe the community produced great fighters in the revolt that led to Gadhafi’s overthrow but failed to project that clout to the political scene.

“In the February 17 Revolution, many Libyan Turks took the lead in the war. Unfortunately, they were not politicians — they were used for the interests of Western and neighboring countries,” the official said. “We lack strong representatives in the government. Prime Minister Sarraj himself is a Turk, but he is too weak. We are not [allied] with Sarraj, but we stand by the government against the big enemy, Hifter.”

And how do members of the Libya Koroglu Association view Turkey’s policy? “We are utterly at odds with the figures with whom Turkey collaborates,” the official said. “The Turkish government works with men of money and influence. It has not engaged with the leading figures of our community. But when Hifter targets the Turkish government, we are the only community that would defend Turkey,” he added.

The official called on Ankara to review its alliances in Libya. “We don’t want Turkey to withdraw its military and logistic support, of course. But we expect support for our project and not that of treacherous trade-mongers,” he said, adding, “Our project is based on equality, justice, equality of opportunity and [the notion that] power should be given to the February 17 revolutionaries.”

The official was referring to an 11-page civic society plan that proposes solutions for the entire governance system, including the legislature, the executive, the judiciary and security bodies.

According to the official, the Libya Koroglu Association, which aims to revive the Ottoman legacy in North Africa, aspires Turkey to take the following steps: Recognize the Koroglus as Turks and grant them citizenship rights; engage in dialogue with the association; push for a committee to work on rectifying distortions about the Ottomans in the school curriculum; support the opening of primary schools, Turkish-language courses and a radio station for Libyan Turks; restore Ottoman monuments in Libya; and build a mosque akin to Istanbul’s iconic Blue Mosque.