The Libyan National Army, operating under the command of Gen. Khalifa Hifter, declared victory in Benghazi after ousting Islamists, further consolidating the role Hifter could play in shaping Libya's future. 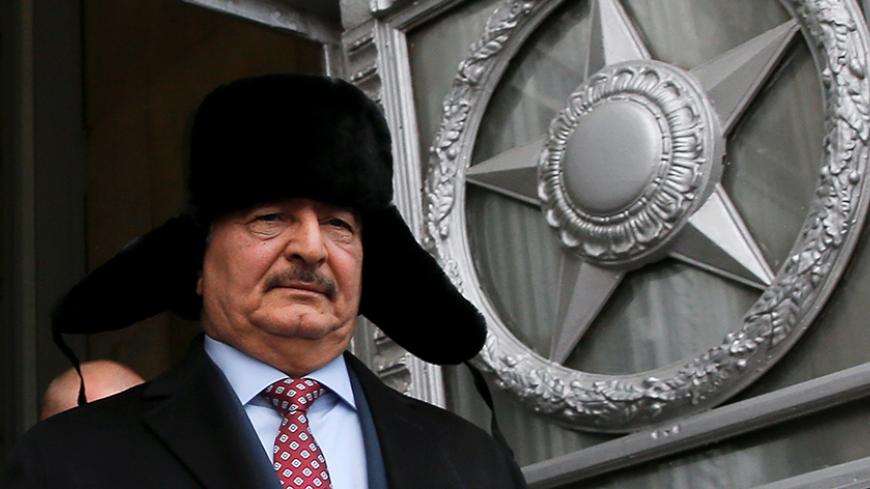 Gen. Khalifa Hifter declared full victory over a coalition of Islamists in Benghazi, in eastern Libya, after nearly three years of fighting that left much of Libya’s second largest city in ruins.

In his July 6 victory speech, Hifter appeared confident that his mission to “liberate” the rest of Libya from what he called “terror” is going well, but he did not say if this means there will be more fighting in western Libya, including the capital Tripoli. Noteworthy, though, Hifter appeared to be reconciliatory toward other military opponents as he called the recent liberation of Sirte from the Islamic State (IS) a “national achievement” instead of dismissing it as a game, as he did before. When rival forces from Misrata, who are aligned with the Tripoli-based Government of National Accord (GNA), liberated Sirte from IS in December 2016, Hifter dismissed the victory as nothing but a game between different militias.

In 2014 when Hifter first launched his fight against Islamists, no one thought that the little-known general would get so far given his difficult and dismal start, which lacked almost everything needed to conduct a successful war against myriad Islamist militias, including IS.

This military victory comes against the background of fast-moving events in the region, including the crisis between a Saudi-led coalition made up of Egypt, Bahrain and the United Arab Emirates on one side and Qatar on the other. The Saudi axis accused Doha of supporting terrorism and destabilizing many countries in the region, including Libya, where IS lost its stronghold of Sirte and now almost all Islamist groups have been driven out of Benghazi. Doha has long been accused of being the main supporter of different Islamist militias in Libya, particularly in Benghazi.

Since early 2014, the war in Libya has increasingly become a proxy war between countries vying for influence and interests in post-Moammar Gadhafi Libya. On the one hand, Egypt and the UAE have supported Hifter, who is backed by Libya’s elected parliament based in Tobruk. On the other hand, Turkey and Qatar, who played a major military role in deposing Gadhafi in 2011, supported various Islamist groups, including the Libyan Brotherhood.

Hifter’s main problem has been the internationally recognized government in Tripoli — the GNA set up by the United Nations’ former envoy to Libya, Bernardino Leon, in 2015 after the main Libyan factions accepted and signed the deal in December 2015.

Hifter does not recognize the GNA mainly because it does not recognize him and his self-styled Libyan National Army, which he commands and sees as the cornerstone of any future Libyan army. Despite his meeting with GNA Prime Minister Fayez al-Sarraj in March in Abu Dhabi, Hifter still believes the GNA is controlled by illegal militias in Tripoli. He also sees the GNA as a failure in terms of improving the living situation for millions of Libyans.

For its part, the GNA and many of its supporters, along with some armed militias in western Libya, do not trust Hifter. The majority believes he is eyeing power and would very much like to be Libya’s next president — despite his assurances on many occasions that he is only fighting to make the country safer for everyone. At times, Hifter is likened to his backer, Egyptian President Abdel Fattah al-Sisi, who led a military coup against Muslim Brotherhood-affiliated President Mohammed Morsi and then capitalized on his popularity to win the presidential election in Egypt in 2013.

Whatever the case, Hifter now is a force to be reckoned with and cannot pass for the little general he was years ago. His popularity in eastern Libya and some cities in the western and southern regions of the country make him even bigger than the elected parliament that supports him. This has been demonstrated in his increasingly public political role. He recently visited the UAE, one of his main regional backers. At home, he received different diplomats, including the Italian ambassador to Libya. Many European countries, including France, praised Hifter’s forces' efforts in liberating Benghazi.

As a major military player in Libya, Hifter has been around for a while, but lately, he seems to score much better than before. Forces loyal to him have gained foot in many parts of western and southern Libya — including Sabha, the capital of the south — after taking the strategic military base in al-Jufra in June 2017. The advances came a few weeks after 141 people, including civilians and soldiers loyal to Hifter, were killed in a surprise attack by Islamists aligned with his enemies in Benghazi.

Sarraj recognized the liberation of Benghazi but refused to congratulate Hifter. The GNA only issued a statement congratulating Benghazi’s residents on liberating their city from Islamists without any reference to the Libyan National Army by name. Many social media sites from eastern Libya made an issue out of it, accusing the GNA of hypocrisy.

On July 15 and in a surprise move, Sarraj appeared on a prerecorded message on national TV to announce a nine-point road map to solve the current political impasse. The main points in the “Al-Sarraj initiative” — as it became known in the media — are: implementing a cease-fire across the country, holding presidential and legislative elections in March 2018, and the return of all armed groups to their headquarters.

On the face of it, the initiative appears to be a mere maneuver to move forward without any realistic chance of success. First, it is almost impossible to organize any legitimate and fair elections given the lawlessness in many parts of the country, particularly in the Tripolitania and Fezzan regions where militias are still very influential. It is also unlikely that the Tobruk-based parliament and Hifter are ready to accept the initiative — meaning that if elections go ahead without their approval, the parliament and Hifter will have the means to interrupt the election process in eastern Libya.

Cessation of hostilities to give elections a chance to take place in peace is very unlikely since the GNA does not have full control over the armed militias backing it in the greater Tripoli area, let alone in the rest of the country.

It all now depends on what the new UN envoy, Ghassan Salame, will bring to the table. What is widely expected is a limited change to the Libyan Political Accord to include the new facts on the ground about the support Hifter enjoys. The man is here to stay, and this is a fact that has to be seen as it is.