What's next for Gen. Hifter after moving into southern Libya?

Libya’s eastern military strongman recently launched an offensive to clear out militias from the southern region of the country, in what could be seen as a move to stabilize the whole of Libya. 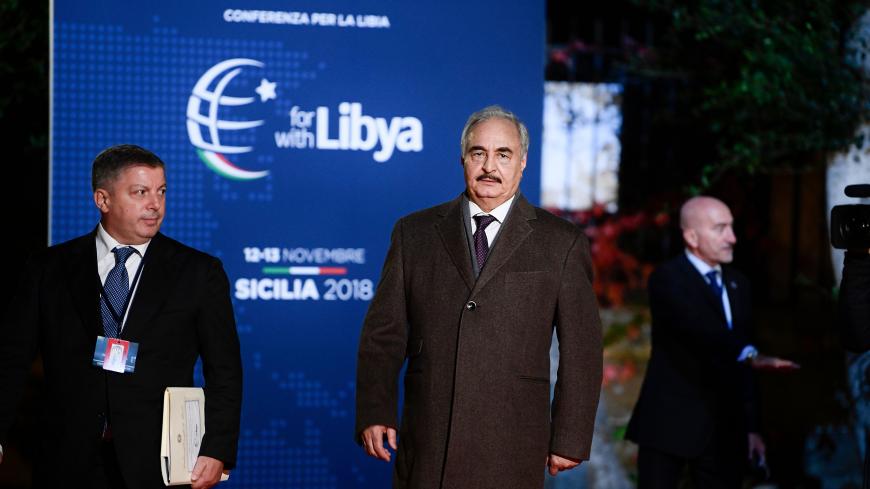 I recently made the five-hour drive from Tripoli to the little town of Harawah, home to the Awlad Suleiman tribe, about 80 kilometers (50 miles) east of Sirte in eastern Libya. Just before reaching Harawah, I passed through the last checkpoint manned by the Libyan National Army (LNA), headed by Gen. Khalifa Hifter. The single guard in military uniform at the checkpoint waved me through without question.

Libya has been torn between two would-be leaders: Hifter in Tobruk in the northeast, and Fayez al-Sarraj, the prime minister of the Government of National Accord (GNA) in Tripoli in the northwest. The UN recognizes the GNA; Hifter's LNA has the support of Russia, Egypt, the United Arab Emirates and France.

On the day I arrived, locals were talking about how one of Harawah’s sons had advanced into southwest Libya and how he'd been welcomed by the locals in places like Sabha, the regional capital of Fezzan, as southern Libya is known. With a sense of pride, one of the locals told me, “[Officer] Hassan Maatouk is leading LNA’s first brigade to enter the southern region since the [first] civil war ended in October 2011," when Moammar Gadhafi was ousted.

Maatouk initially had founded his own militia, funded by his rich brother, to keep security and calm in Harawah after the little town’s violent episode with the Islamic State (IS), before it was defeated in December 2016. At some point last year, Hifter heard of Maatouk and asked if he wanted to join the LNA, which he did.

Choosing Maatouk to lead the LNA’s first brigade heading south is clever on Hifter’s part. Hassan belongs to the Awlad Suleiman tribe, which has a branch in Sabha with its own armed militia. If anyone is able to persuade them to join the LNA or lay down their arms, it is their own son, Maatouk.

For years the southern region has been lawless, with sporadic fighting between local tribal militias. The region is also home to Chadian guerrillas fighting against their government across the border. Human trafficking is also a big problem in the area.

LNA’s brigades heading south have three important objectives: to convince as many tribal militias as possible, particularly Awlad Suleiman, to either join the LNA or lay down their arms; to clear out the different Chadian armed opposition groups; and to control as much as possible of the largely desert region, which is not controlled by any local party.

Controlling the region means, among other things, cutting any supplies headed north to the different militias that control the area from Sirte west to Tripoli. It also means guarding the area against IS remnants scattered south of Sirte and deep into the desert, all the way to neighboring countries like Niger and Chad.

Having been defeated and ejected from Sirte in 2016, IS has not given up on Libya. After being hit hard in Syria, IS may be considering Libya as a potential new base. Unstable and fractured as it is, Libya provides the right environment for the terror group. Many of its fighters are still around and there are thought to be sleeper cells in Tripoli. In May, IS struck Libya’s election commission, and in September, it destroyed much of the country’s National Oil Corporation. In December, it attacked the Foreign Ministry building on Tripoli’s seafront.

Three days after the LNA’s first troops arrived in the south, the army struck big luck by killing Abu Talha in the small town of al-Shati, 60 km northwest of Sabha, on Jan. 18. LNA spokesman Brig. Gen. Ahmed al-Mesmari said that three of Abu Talha’s top commanders were killed too. Abu Talha is a Libyan jihadist who was a member of al-Qaeda and founding member of Jabhat al-Nusra in Syria before he returned to Libya in 2014 to fight the LNA in Benghazi.

If the LNA manages to keep its positions in the middle and southern regions, it means all militias along the coast, including in Misrata and Tripoli, are surrounded, even if from a distance. As the LNA consolidates its presence, it may consider moving toward Tripoli. As of Jan. 29, LNA forces were spreading in the area after taking most of Sabha, including its famous castle.

Such a scenario will certainly involve confrontations with the strongest militia, al-Bunyan al-Marsos, which controls the area from Harawah in the east, all the way to Misrata in the west, along the coastal road from Sirte to Tripoli. Most fighters in the militia are from Misrata, and al-Bunyan al-Marsos is the same militia that expelled IS from Sirte in December 2016 with help from the US Africa Command and Italy.

On paper, al-Bunyan al-Marsos operates under the GNA's control, just like many other militias claiming alliance to the weak government. However, in reality, it has its own command structure and exists almost independent of the GNA. Its leadership doesn't like Hifter and is concerned that his latest gains in the south could put them in a dangerous situation with the LNA.

If Hifter is still following his objective of controlling Libya, then at some point he will have to take action against other militias entrenched in Tripoli and other cities along the coast. However, in the current political atmosphere, it's unlikely the LNA will take any action against any other militia. Hifter is bound by his commitment to the international community, to UN envoy Ghassan Salame, to free elections and to avoiding violence under all circumstances.

Such commitments were initially made during a Paris meeting in July 2017 between Hifter and the GNA’s Sarraj. The same pledges were repeated in another Paris meeting in May 2018 and again in November in Palermo, Sicily.

Is the LNA’s latest move into the lawless south another political maneuver by Hifter to keep himself at the top of politics in Libya, or is it a serious, genuine effort to repeat his success in eastern Libya and further consolidate his power, to be translated into political cards at the right time? Such questions aren't easy to answer. Hifter has, on many occasions, distanced himself from politics, always claiming that the LNA is a professional army tasked with securing the country and helping the political process being led by Salame. That process includes elections sometime this year and it remains unclear if Hifter is seeking to run for the presidency.

If he plans to run for office, then upcoming elections could be his last chance to put on a civilian suit and try his luck. At 75, he has reached retirement age. He is also a dual Libyan-American citizen and current Libya law prohibits dual citizens from holding any public office unless they renounce their foreign citizenship. To run for office, Hifter also would have to first leave his military position, which would be a big risk for him. What if he were to lose the elections and end up completely out of the political and military scene, after he fought so hard to get where he is now?

In terms of elections, he would really only have one option: to publicly endorse other candidates loyal to him and hope they remained loyal so he could still play a military role after the elections.

While it's easy to figure out how many armed militias are willing to fight against Hifter’s LNA, it's unclear how many Libyans are willing to cast their ballots for him. Although no concrete figures are available, Hifter is popular, particularly in eastern Libya. In Benghazi and other places, he is looked at as a savior who brought back security and relative stability after years of chaos and bloodshed.

In western Libya, it's a little different. While many Libyans like what Hifter did in the east, they're not sure what he will do if one day he takes Tripoli by force. Many others support him and are willing to vote for him if he runs for office because they believe the country needs a strong figurehead to lead it out of its current misery.