In an interview with Al-Monitor, a member of the Tobruk-based parliament talks about Gen. Khalifa Hifter’s operation to cleanse the south from armed gangs and secure oil fields. 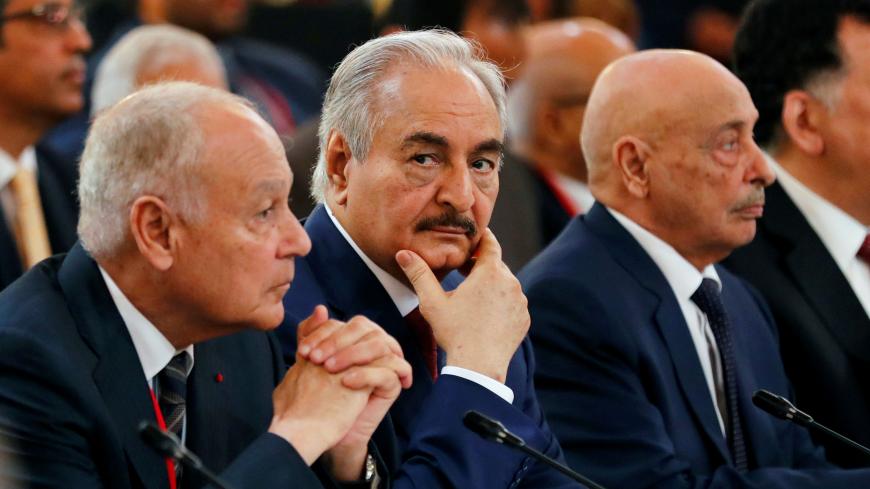 Libyan National Army commander Khalifa Hifter (C) is seen during an international conference on Libya at the Elysee Palace in Paris, France, May 29, 2018. - Etienne Laurent/Reuters

On March 2, the LNA announced it had taken full control of southern Libya after taking several cities and oil fields like El-Sharara and El-Feel. The moves angered the rival Presidential Council of the internationally recognized Government of National Accord (GNA) based in Tripoli. Chairman of the GNA’s Presidential Council Fayez al-Sarraj accused the LNA of seeking political gains by expanding its area of control.

In a phone interview with Al-Monitor, Misbah Douma, a member of the Tobruk-based parliament representing Sabha, one of the main cities of the Libyan south, revealed the latest details of the LNA activities in the south and his position on the accusations directed at these activities.

He also discussed the concerns about clashes between some southern tribes and the LNA, especially after the Toubou tribe accused the LNA of exploiting tribal rivalries and Sudanese opposition forces in this cleansing. Toubou is among the main tribes of the south and inhabits the border between Libya, Chad, Sudan and Nigeria. Its members are estimated at 2 million and are believed to originate from Chad.

Al-Monitor:  The situation in South Libya flared up recently after the LNA launched, on Jan. 15, the operation to cleanse the south and control the areas under the rule of criminal gangs and terrorist groups. What is your take on this operation? How is the situation in the south now?

Douma:  The operation is long overdue, and the LNA has received a warm welcome from the people, who want nothing more than security and safety, given the increased activity and control of terrorist, criminal and foreign gangs in the region. We must underline that the successive governments in Libya served only their own interests and offered no meaningful support for the south or its citizens to fight Chadian and Sudanese insurgent gangs. When the LNA forces came along, the people in the south stuck with them. It is because of this solidarity that the operations are ongoing and have reached the southern Libyan borders to cleanse the south of criminal gangs and terrorism.

Al-Monitor:  Sarraj said that the LNA operation in the south is intended to achieve political gains. The LNA soldiers were accused of raiding opposition members’ houses. How true are these accusations?

I believe Sarraj’s statements about the operation reflect concerns about loss of authority and expansion of the LNA's power. His concerns are not related to the interests of the southern inhabitants who are happy with the LNA’s actions.

Some tribes in the south announced that they would not protect criminals among them because they believe in the steps of the LNA in the south. The government has the legal right to arrest any criminal. Any person abused illegally by the army can sue his abuser, as is the case in the rest of the world.

Al-Monitor:  There are concerns among the Toubou tribe and the GNA that a civil war might break out in the south due to the LNA’s actions. Did the operation breed a conflict between the army and social components and tribes in the region?

Douma:  Whoever has concerns must voice them and discuss them with the LNA to receive guarantees and reassurance. As members of parliament of the Libyan south, we are ready to handle this issue and forward it to the LNA, which has the country’s best interest at heart.

However, whoever is obstructing the LNA’s work and threatening the security of people and the nation will be stopped. But I have not in fact heard about these concerns. The real concerns involve criminal foreign gangs’ ongoing violation of Libyan sovereignty and borders after controlling several southern regions and turning them into hotbeds for terrorist, criminal and mercenary groups that tightened the noose on the Libyan Sahara. These groups get their funding from the drug trade, illegal migration, fuel smuggling and kidnapping citizens in exchange for ransom.

Rumors about a possible civil war are far from the truth. As representatives of Libyans, we will not accept unjust abuse of any social component in the south. At the same time, we will not allow transborder tribal extensions to desecrate Libyan territories in their attempt to twist the state’s arm and naturalize foreigners from neighboring countries with the force of arms. Most tribes of the south have familial extensions in countries like Nigeria, Chad, Sudan, Mali and Algeria. Although they are our relatives, they should come to the south as honored guests, not as foreigners carrying arms against Libyans. They should respect Libyans in their country.

Al-Monitor:  In its Feb. 9 statement, the Toubou tribe accused the LNA of exploiting rival tribes and Sudanese opposition forces in the southern cleansing operation. What is your take on these accusations?

Douma:  This question is for the LNA, not me.

Al-Monitor:  The GNA Presidential Council decided to appoint a military leader for the Sabha region, Ali Kenno, who announced he would fight the LNA’s actions in the south. What is your take on this decision? How did it affect the situation in the south?

Douma:  The decision of the GNA Presidential Council to appoint Kenno as leader for the Sabha region is just talk and has no real impact or power over the course of action of the LNA.

Al-Monitor:  The LNA announced its control over El Sharara oil field Feb. 6 and El Feel oil field on Feb. 21. … The head of the National Oil Corporation said on March 4 operations will resume in El Sharara field. Will these developments impact the Libyan economy?

Douma:  The situation is stable thanks to the wisdom of the Tuareg tribe and Ubari citizens who support the LNA. They realize that the army’s control of El Sharara oil field will have a positive impact on the Libyan economy.

Al-Monitor:  What are the main challenges and problems facing south Libya? What do you think are the best solutions for these crises?

Douma:  The main problems in the south include the absence of an executive state and representatives, leading to a lack of services. The south is lost between the GNA based in Tripoli and the interim government in Al-Baydaa.

After the LNA entered the south, the interim government took control because the army recognizes it but does not recognize the GNA. The interim government is suffering from a lack of resources because the GNA is confiscating everything, as the international community recognizes it. Therefore, a unity government must be formed, and a prime minister’s office in the south must be created and granted privileges. Offices for vital ministries should also be opened in the south.

The second problem in the south is the southern borders, where chaos is rampant, and Sudanese and Chadian groups are taking advantage of the situation. Organized crime, abductions and murder are on the rise due to the lack of security.

Al-Monitor:  How did the parliament deal with the crises in the south and with the citizens’ suffering?

Douma:  At first, I voiced my approval of the political agreement in Al-Sukheirat in 2015 that resulted in the formation of the GNA. I thought it would be a united government, but the rift only worsened and now Libya has two governments.

Then, we noticed the GNA’s sole attention to Tripoli and its neglect of the south. Even its offers of services to the south, like spending 1 billion Libyan dinars ($721 million) on the south in December 2018, were just talk. The interim government decided Feb. 14 to spend 200 million dinars ($144.2 million) on services in the south. But the amount was not enough because the south is large and in need.

Al-Monitor:  Why did you call for presidential elections to preserve Libyan unity?

Douma:  Presidential elections are necessary to protect what is left of the state due to political conflicts. People should have the final say in deciding their rulers.

Al-Monitor:  You called for presidential elections to protect Libya’s unity, but UN special envoy to Libya Ghassan Salameh said Feb. 3 that a date for elections will not be set before a settlement is reached. What do you make of Salameh’s statements about the elections? Why do you think elections at this stage are important?

Douma:  Salameh is not well informed about the Libyan situation, the problem of most UN envoys who came to Libya. Salameh must realize that the interim phase always bears corruption and chaos, and only elections can put an end to that and unite governments. They would give the Libyan people an elected president, a recognized government and a united army and budget distributed fairly among Libyan cities.

Al-Monitor:  Sarraj met on Feb. 28 with Hifter in Abu Dhabi, and they agreed on the need to hold elections. What is your take on this meeting?

Douma:  In order for any meeting between Sarraj and Hifter to succeed, a timetable [for elections] should be announced and all parties must abide by it. Elections should produce a national unity government and pave the way for a constitutional referendum. The Abu Dhabi meeting will only succeed if intentions are translated into reality. We do not measure success based on statements.

I also see the need to elect an interim president in light of the chaos and failure of the Presidential Council to manage the country. The people are yearning to cast their vote. There is also a need to unify the state institutions, including the Central Bank of Libya, which has two branches — one in al-Bayda affiliated with the interim government, and another in Tripoli affiliated with the GNA. The interim president would be the commander-in-chief of the armed forces, a position that is a source of dispute in the talks on unifying the Libyan army. Sarraj and Hifter have yet to agree on a candidate for the armed forces’ commander-in-chief. This is why elections are the solution to this problem.

Al-Monitor:  How will the elections be held amid battles in the south and sporadic clashes between armed groups in Tripoli?

Douma:  The Libyan people can’t wait to cast their votes in the ballots. They realize the division has impacted the economic situation. Saying that the elections cannot be held due to clashes and spread of weapons is an exaggeration. Those who want to remain in power are using this excuse to stall. If we succumb, we will never have elections. Libya is like any state facing terrorism and it has an army fighting for it.

Al-Monitor:  What are the future possibilities for the Libyan crisis? What is the best-case scenario?

Douma:  The best-case scenario is holding the presidential elections as soon as possible. People want an elected president to handle the tasks of the armed forces’ chief of staff, to work on facing chaos, terrorism and criminal groups and to protect Libya’s sovereignty and secure the borders. Any other scenario would breed more division and chaos. Libya needs to put an end to the transitional phase it has been enduring.