In an interview with Al-Monitor, the foreign minister of the interim Libyan government, Abdul Hadi al-Hweij, discusses what he sees as the international community’s perplexing stances toward Libyan groupings in addition to speaking about the battle for Tripoli and other developments in the Libyan arena. 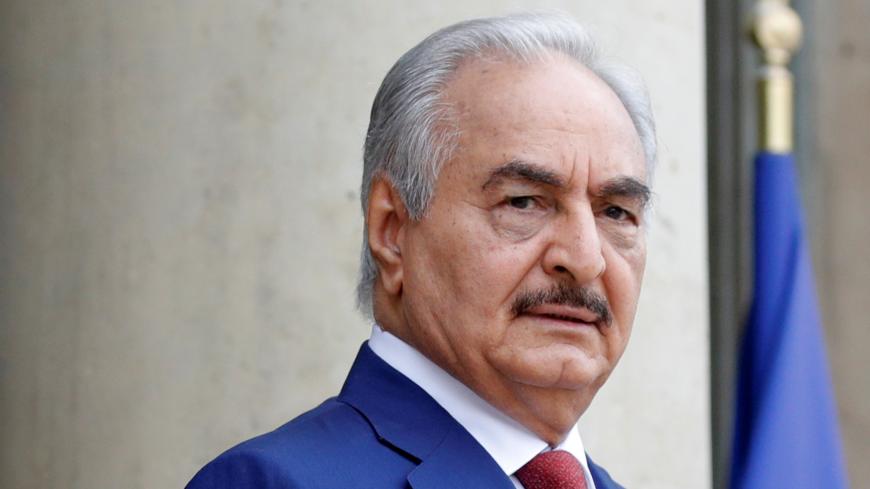 Khalifa Hifter, the military commander who dominates eastern Libya, arrives to attend an international conference on Libya at the Elysee Palace, Paris, May 29, 2018. - REUTERS/Philippe Wojazer

CAIRO — Khalifa Hifter, the commander in chief of the Libyan National Army, declared Operation Flood of Dignity on April 4 against the armed groups scattered in the Libyan capital, Tripoli. This prompted Fayez al-Sarraj, the prime minister of the internationally recognized Government of National Accord, to launch a counteroffensive dubbed Operation Volcano of Rage. The armed groups and troops under the Government of National Accord have joined hands to face the Libyan National Army's advance toward Tripoli. Since then, the battle has been ongoing in Tripoli.

The battle for Tripoli also has a diplomatic character, with each of the conflicting parties seeking to win the international community's support and approval. To this end, the foreign ministers in both the interim government, which supports the Libyan National Army and controls the south and east of Libya, and the Government of National Accord, which has Tripoli and the west under its control, have conducted tours abroad and met with international officials and diplomats. The Government of National Accord declines to recognize the Libyan National Army and Hifter,

As the battle for Tripoli heightened, so did the diplomatic conflict between the two governments; both seek to prove themselves right to the international community. In an interview with Al-Monitor, the foreign minister of the interim Libyan government, Abdul Hadi al-Hweij, spoke about the reasons behind his government’s support for the Libyan National Army (LNA) in the battle for Tripoli, the future scenario in case the LNA takes control of the capital and how to bring Libya back to the political dialogue table.

Al-Monitor:  The situation in Libya is very confusing for outsiders. Could you please start by explaining the origins of your interim government — including its relationship with Khalifa Hifter — and your role in it?

Hweij:  It is important to note, first and foremost, the international community’s confusing stance. While it recognizes the elected Libyan parliament as legitimate representative of the Libyan people, it recognizes the illegitimate GNA [Government of National Accord], led by Sarraj, at the same time.

The legitimate government, namely the interim government, is the one that stems from the elected parliament under the constitution. Hence, its legitimacy derives from the nation’s deputies via the ballot boxes in order for it to serve as the executive authority that provides all Libyan men and women with services.

Field Marshal Khalifa Belgacem Hifter is the commander in chief of the Arab Libyan armed forces, which also emanate from parliament. This is because Libya’s parliament speaker [Aguila Salah], in his capacity of acting supreme commander of the country’s armed forces, declared Hifter on March 2, 2015, as commander in chief of the LNA to serve as a safety valve for Libya’s border, [its] territorial integrity, [its] citizens’ security and dignity and to safeguard the Libyan people’s resources.

Immediately after Hifter was entrusted with the LNA’s commandership, the LNA conducted a military operation to clear the east and south of the terrorist gangs and armed groups that penetrated the country’s territory, seized oil fields, spread terror and death, killed unarmed Libyans without any distinction between children, women and elders, recruited mercenaries, traded in weapons and trafficked in human beings. The LNA managed to counter terrorism with its own capabilities and brave troops, and cleared these parts of the country, despite the international embargo on its weapons. Back then, the entire world welcomed that. Later on, the LNA announced the operation to clear the west and Tripoli of terrorist groups, thus meeting calls that sheikhs, dignitaries, elders and civil society organizations made concerning the municipalities in the west.

Al-Monitor:  The LNA has said it opposes a cease-fire in Tripoli because there is no one to negotiate with. What is your government’s position on this issue? What does the interim government view as constructive grounds for resuming political negotiations?

Hweij:  The liberation of Tripoli and the west cannot be halted as long as the militias and armed groups have not surrendered their illegal weaponry to the LNA. Hence, we cannot negotiate with whomever was not granted legitimacy by the Libyan people and does not make their own decisions.

As I said earlier, we are with our national army in the operation to free the land and Libyan citizens, in order for us to restore security and safety and build a secular and democratic Libyan state where there is rule of law, social and economic justice, where choices are made democratically, and rights and freedoms are respected. Only then will we be able to resume political negotiations, by reactivating and reviewing the provisions of the political agreement signed in Morocco’s Skhirat whose annex on security matters affirms the enforcement of security provisions. Unfortunately, the terrorist groups’ control over Tripoli has prevented the dismantlement of armed formations as planned in the Skhirat agreement.

Al-Monitor:  What do you see happening if the LNA seizes Tripoli?

Hweij:  Just as a correction here, the LNA does not seize Tripoli; it is neither an invader nor an occupier. Rather, the LNA is the liberator of Tripoli from the militias and its mission is to ensure safety and stability, protect national sovereignty, defend Libya’s territorial integrity from any aggression and preserve the legitimate institutions.

Our first step would be to disarm [civilians and armed formations], rebuild the state and reactivate the laws and tribunals in preparation for free and independent municipal, parliamentary and presidential elections that would reflect the respect to the will of the Libyans who will take their fate into their own hands.

Al-Monitor:  What will happen to the internationally recognized PM Sarraj and his government?

Hweij:  It is up to the Libyan people to decide. We extend our hand to whoever respects the legitimacy and the law.

Al-Monitor:  Does the army support new elections? Some have worried its victory would lead to a militarized state — what is your response?

Hweij:  I believe I made myself clear about the LNA’s role and mission.

Al-Monitor:  What is your role in working with the international community?

Hweij:  Our role is to show the international community the truth about the war on terrorism, about the party we are battling against, the reasons why we are fighting, and where we want to be at the end of the battle. In order for our message to be delivered, we made visits in some countries deemed important for the resolution to the Libyan crisis and met with the relevant parties.

We also hosted political, media, human rights and intellectual delegations to present a direct briefing on the reality in Libya, and met with tribal elders and notables, and civil society organizations.

Al-Monitor:  What message are you conveying to them about the situation in Libya and how they can help? What are you hearing in response?

Hweij:  Our message to the international community is crystal clear. The thing we want in the first place is that the international community pressure countries that supply terrorists with weapons to refrain from doing so. The arms embargo needs to be lifted off the LNA and the interim government needs to be heard, as well as its project on how to run the country’s affairs following the liberation of Tripoli. Such a project is not based on domination, exclusion, marginalization or lack of control over arms and militias. Rather, it depends on the results of democratic elections in the absence of fear, arms and militias.

Al-Monitor:  What role — if any —– do foreign nations have to play in Libya? Can you name any that are part of the problem rather than the solution?

Hweij:  The international community is well aware that there are foreign countries meddling in Libyan affairs, which the UN special envoy to Libya Ghassan Salame admitted. Such interference ranges between the military support Qatar, Turkey and Italy are providing to the armed groups in Tripoli, creating an unsafe environment deemed favorable for supporting terrorism and training militias in the country, and meddling in Libyan internal affairs. Also, some are using a double-standards policy when dealing with the different Libyan parties as they seek to protect their interests in Libya and serve their oil ambitions.

This is not to mention the media war and misinformation and the attempts to depict the LNA and its commander in chief as war criminals, falsely accusing the LNA of targeting civilians and institutions and of using foreign countries’ weapons and drones and having in its ranks internationally wanted members or others on the terrorism list; [such accusations] are untrue. Therefore, these three countries cannot be part of the solution while being the main importers of terrorism and war on the legitimacy.

Al-Monitor:  Are reports that US President Donald Trump gave his blessing to the attack on Tripoli accurate? And do you think the international community’s stance on Libya has been consistent?

Hweij:  The party issuing the reports or even Trump himself are the ones who can answer this question.

We, at the interim government which the legitimate parliament supports, are open to the UN, the Arab League, African Union, UNHCR and others. We have hosted their delegations and held business meetings with heads of states and governments. We were very cooperative with the UN special envoy to Libya Ghassan Salame before it became clear that he is biased toward the other side and accuses the LNA of heading to a civil war.

This is while he was a main reason behind the national conference’s failure, as he adopted non-objective criteria for the selection of civil society representatives, and excluded parliament and the Libyan interim government. This is not to mention his ambiguous actions and resounding mistakes that do not serve the best interest of Libyan men and women. This is why we demanded that [the UN secretary-general] replace him and that the interim government be involved in the official meetings of the UN, AU [African Union] and OIC [Organization of Islamic Cooperation], particularly since it consists of the legitimate government that stems from a parliament elected by the Libyans. That’s our demand to the international community regarding Libya.