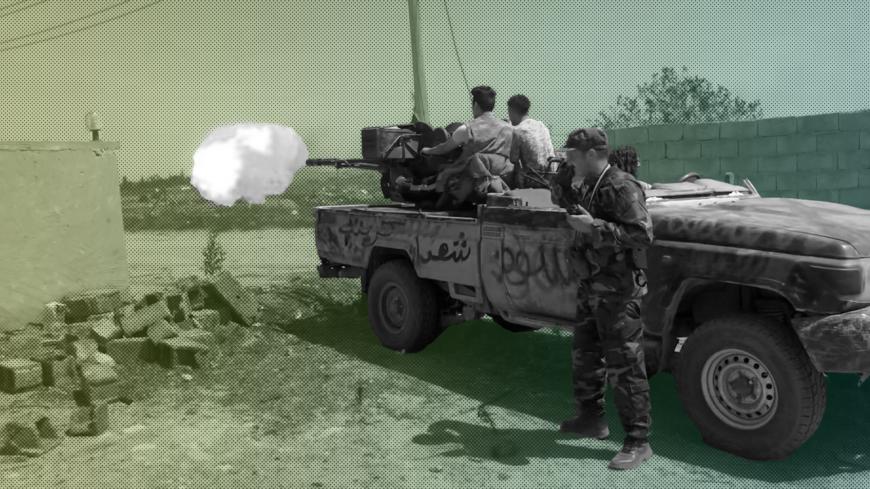 CAIRO — The Libyan National Forces Alliance (NFA), which includes former ministers, tribal sheikhs, politicians and human rights activists close to military commander Gen. Khalifa Hifter, held a meeting in Cairo on June 17 to support the efforts of Hifter’s Libyan National Army (LNA) in fighting what they describe as terrorism and extremism in all of Libya and to emphasize its role in restoring Libya’s stability.

In the final communique of the meeting, the NFA expressed the need to enable civil institutions in Libya to carry out their work in a secure and stable atmosphere and reach out to Tripoli's militants. The communique also accused UN envoy Ghassan Salameh of bias as a mediator.

The NFA statement also condemned Qatari and Turkish support for the armed militias and rejected the peace initiative put forward by the chairman of the Presidential Council of Libya and the prime minister of the Government of National Accord, Fayez al-Sarraj.

On June 16, Sarraj suggested a Libyan forum in coordination with the UN mission, representing all national forces from all areas, with the task of holding presidential and parliamentary elections before the end of 2019. But Sarraj said he was not willing to sit and talk with Hifter.

On June 22, Salameh met with Hifter and discussed the humanitarian situation in Tripoli and ways to reach a political solution.

Prior to the Cairo summit, Egyptian President Abdel Fattah al-Sisi met with speaker of the eastern Libyan parliament Aqila Saleh in Cairo June 13 and expressed Egypt’s unwavering support for the LNA’s campaign to eliminate terrorists and terrorist organizations.

Since the Moammar Gadhafi regime was overthrown on Oct. 20, 2011, Libya has been divided. A national power struggle is being fought in Tripoli between Sarraj’s UN-backed internationally recognized government and a parallel government in eastern Libya allied with Hifter’s LNA and supported by several countries such as Egypt, the UAE and Saudi Arabia.

To protect western Libya, Sarraj’s government relies on militias such as the Tripoli Protection Force, Libya Revolutionaries Operations Room, Nawasi Brigade and the Special Deterrent Forces, which have pledged to confront any attack by Hifter’s army, the BBC reported April 5.

The violence in Libya escalated on April 4, when Hifter launched an offensive against Tripoli. So far, 635 people have been killed and over 3,550 injured, the World Health Organization reported June 10, and Hifter faces international pressure to withdraw his troops from Tripoli.

Badruddin Zayed, a former assistant to Foreign Minister Mohammed Siala, told Al-Monitor over the phone, “The NFA meeting represents an important step in reaching Libyan understandings required for any political settlement." He added that Cairo was chosen as the venue for security considerations.

A political understanding must be reached regardless of how long the fighting goes on, Zayed explained, but noted, “These political understandings cannot take place in the presence of extremist militias controlling Tripoli supported by Turkey and Qatar, and thus eliminating them is necessary to achieve this settlement.”

Abdul Sattar Hatita, a journalist specializing in Libyan affairs who writes for Asharq Al-Awsat newspaper, told Al-Monitor over the phone, “The NFA meeting supports uniting Libya and the military establishment. It is part of a series of meetings aimed at opening up space for dialogue and emphasizing that [force is] the only way to restore stability.”

Hatita noted, “Given the situation, conferences and popular movements alone are not enough. The Libyan state’s friends and countries supporting the LNA need to look at the matter more seriously and end the chaos instigated by Turkey and Qatar, both of which support extremist groups and militias. Cairo was chosen to host the meeting due to Egypt's continuous support for the Libyan state and its being a main actor in assisting the Libyans by hosting such meetings and in efforts to unite the Libyan military establishment.”

In an April 12 press conference in Benghazi, LNA spokesman Ahmed al-Mesmari announced that his forces are now facing al-Qaeda terrorists directly in Tripoli, stressing that Turkey and Qatar support extremist militias there.

Meanwhile, Libyan affairs specialist at Al-Ahram Center for Political and Strategic Studies Ziad Aqel told Al-Monitor over the phone, “The issue in Libya is no longer in the hands of the political forces; the military forces have taken over, be it the LNA or the militias.”

He added, “Although the meeting’s final communique may seem to lay down the law, it is actually difficult to apply, as the conflict between military forces is ongoing and they still refuse to recognize one another. This is why any political effort toward a settlement will be difficult.”

Aqel pointed out that Sarraj’s initiative suggests that the political settlement is not acceptable among the conflicting parties, especially since he stressed that he does not want a dialogue with Hifter. He said that regional and international pressure needs to be exerted on these parties to push for a settlement, particularly from Egypt.

Libyan political analyst Essam Eltagouri told Al-Monitor over the phone that the Cairo meeting is part of political efforts to build a political framework for the next phase, but the meeting did not receive wide support.

Eltagouri explained, “Talks and political action alone without addressing solutions to stop the military operations on the ground are futile. A specific mechanism is required to make sure armed [forces] do not interfere in any political and economic decision. This will only happen when the armed militias leave Tripoli.”