Despite the Russians' nominal condemnation of renewed fighting in Libya and continuing contacts with all the major players, Moscow doesn’t want to see Gen. Khalifa Hifter defeated. 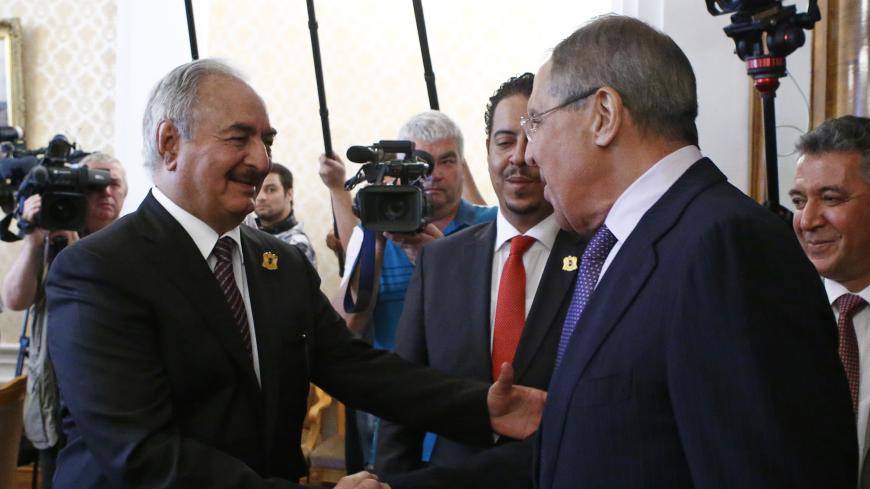 Hifter, the strongman who controls two-thirds of the Libyan territory, ordered his forces April 4 to make a “victorious march” on Tripoli, the capital of the UN-backed government of Fayez al-Sarraj, supported among other groups by powerful Misrata militias.

The mediation effort by UN Secretary General Antonio Guterres, who at the time was in Libya, failed. Following his meeting with the eastern commander on April 5, Guterres tweeted, “I leave Libya with a heavy heart and deeply concerned. I still hope it is possible to avoid a bloody confrontation in and around Tripoli. The UN is committed to facilitating a political solution and, whatever happens, the UN is committed to supporting the Libyan people.”

As the situation remains highly precarious, outside backers of the warring parties are making their own moves.

Ever since the Russians hosted Hifter onboard the aircraft carrier Admiral Kuznetsov on Jan. 11, 2017, Moscow’s involvement in the Libyan conflict in the post-Gaddafi era has raised suspicions. Russian punditry is divided on the two issues that haunt foreign experts and policy-makers vis-à-vis Russia’s presence in Libya: What are Russia's interests in the country, and is Moscow keeping its eggs in more than one basket or relying solely on Hifter?

Over the last two years, Moscow has been forging contacts with both Hifter and Sarraj and brainstorming ideas with both the Libyans and the Europeans as recently as November. As the political process has remained stalled, Hifter’s offensive breaks previous agreements and seeks to set up a new power balance in the country.

"We are watching the developments in Libya very closely. Without a doubt, we believe that it is essential that any actions must not lead to renewed bloodshed," said Kremlin spokesperson Dmitry Peskov shortly after the first clashes broke out. Peskov stressed, "Moscow is not participating in this in any way."

For now, Moscow may not be taking action, but it's not sitting on its hands. In the phone call with Bogdanov, Hifter briefed Moscow on the LNA's latest moves. Its actions, he argued, were intended to “boost the fight against terrorist and extremist groups that are present in different parts of the country, including in Tripoli, and that threaten the stability of Libyan society and hamper implementation of agreements on the inclusive and consensus-based intra-Libyan dialogue that seeks the establishment of united, effective institutions of governance.”

Moscow reiterated its “principled position” in support of political methods on all Libya's issues and the efforts of UN special envoy on Libya Ghassan Salame.

“A need to consolidate efforts to fight terrorism and extremist ideology was also stressed,” according to a read-out of the phone conversation between Bogdanov and Hifter.

Around the same time, Russian Foreign Minister Sergey Lavrov made a more strongly worded statement. Speaking in Cairo at a joint press conference with his Egyptian counterpart Sameh Shoukry, the top Russian diplomat said Moscow was concerned with the use of airstrikes against the LNA forces and urged outside backers "who have influence over these groups [loyal to Sarraj] to prevent such an escalation and call on the Libyans to cease all the military offensives and come to the negotiating table.” Lavrov also took the opportunity to claim that the essence of Libya's problems stems from the NATO bombings of 2011 “that made the country a black hole through which terrorists and arms are smuggled southward and migrants northward.”

The Russian foreign minister concluded by emphasizing that Moscow continues to stay in contact with all Libyan parties, arguing, “We’ve never staked on any one player in particular. I am convinced this is the only right way to act in this case.”

Perhaps Lavrov could have said nothing different, given he made the statement in Egypt, one of the key Arab backers for Hifter along with the UAE and the Saudis. But even if he meant to make the remarks sound conciliatory, the experienced diplomat exposed Russia’s bottom line: Moscow doesn’t want to see Hifter defeated nor does it agree with the condemnation of his military gamble on Tripoli.

Official statements from the Foreign Ministry also suggest that Hifter has Moscow’s moral support and that Russia’s radar screen of the situation is perhaps brighter than everyone else’s.

None of this should really be eye-opening. Russia has indeed developed good contacts with all the major players in Libya and will continue working them. At the same time, Moscow’s past and recent overtures to the local actors have already shaped depth of commitment to each player and some policy patterns. Moscow’s perceived inclination for Hifter can perhaps be paraphrased from George Orwell: All players are equal, but some are more equal than others.

That said, Russia’s view on the current situation in Libya appears to be based upon the three assumptions. First, Hifter is powerful enough to take control of the whole country, especially since he enjoys a cohort of outside supporters with resources. Second, Libya is too much of a “patchwork state” for the groups that Hifter united under his leadership to be excluded from any reconciliation process, let alone power-sharing at a national level. So politically edging him out now or sanctioning him if he gets control of the capital won’t bring stability to the country.

Third, should Hifter fail in the current adventure or even ultimately lose his influence, existing contacts with the Sarraj camp as well as with multiple other groups and tribes will keep Moscow a vital player able to stitch different interests into one functioning state simply because all other outside backers — the Arabs, the Europeans and the temporarily departed Americans — have exposed their biases for one party.

Besides, Russia has created an image of a new king-maker in the Middle East for itself throughout the Syrian campaign, and presumably, the actors in Libya will seek Russia’s support for their own actions. First you work for your reputation, then your reputation works for you.

Therefore, it comes as little surprise that the day after Hifter’s call with Bogdanov, the Russian deputy foreign minister had a separate phone conversation with the vice president of the Presidential Council of Libya and Misrata representative Ahmed Maiteeq. The latter told the Russian diplomat that the only solution to the current crisis is "the departure of aggressor forces from the military zone in the western and southern regions."

Russia thus acquired an understanding of the starting negotiating positions should the parties seek mediation.

A more serious sign of Russia’s position in the crisis than its political rhetoric would be military support for Hifter. Rumor has long had it that Russia’s Wagner mercenaries are present in the east of Libya and partnering with Hifter. So far there isn’t much concrete evidence — just claims by anonymous Ukrainian intelligence officers.

As long as Moscow doesn't help Hifter militarily, Russia will continue to politically shield Hifter from international pressure by branding his Tripoli march as an unfortunate implication of the failed Libyan peace process and continue to advocate for a renewed diplomatic settlement of the crisis, perhaps under its own sponsorship. In all of this, Moscow will stick to the golden rule of Russian diplomacy: Position yourself in a way that makes you the go-to for all the parties regardless of your own engagement with each of them.