Russia has positioned itself as an impartial middleman in the Libyan crisis, but there's a fine blueprint that defines this position. 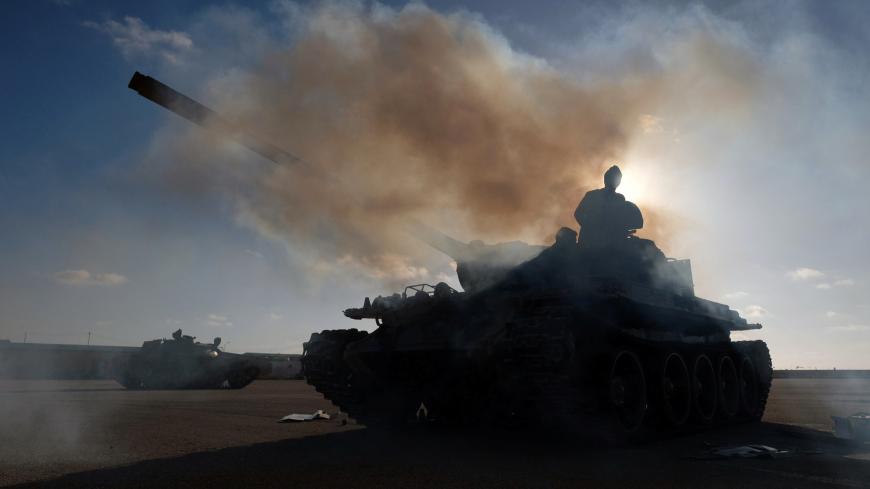 Members of the Libyan National Army commanded by Gen. Khalifa Hifter get ready before heading out of Benghazi to reinforce the troops advancing to Tripoli, Benghazi, Libya, April 13, 2019. - REUTERS/Esam Omran Al-Fetori

Russian President Vladimir Putin recently put Russia in the spotlight in Libya by first holding a meeting with Italian Prime Minister Giuseppe Conte on the sidelines of the Belt and Road Summit in Beijing and later discussing Libya with Turkish President Recep Tayyip Erdogan on the phone. Conte reportedly proposed his Russian counterpart to work together on the resolution of the deepening crisis in Libya.

Russian strategy toward Libya may indeed seem puzzling to observers, with constant zigzagging between conflicting parties, which in the words of Foreign Minister Sergey Lavrov is Russia’s approach “to not bet on any one party.” In reality, however, the Russian strategy at present is mostly reactionary and only aims to keep Russia relevant in the Libyan context. Unlike other foreign powers that have established clientelistic partnerships with local actors, the Kremlin has little skin in the game and has little to offer what other foreign powers can’t.

Confusing messages coming from Russian officials reflect approaches and interests to Libya across Russian government institutions that are out of sync as well as a lack of centralized Libya policy planning. Key Russian stakeholders working on the Libya file — the Foreign Ministry, the Ministry of Defense and the largely marginalized Contact Group for Intra-Libyan Reconciliation — all follow their own cautious trajectories on Libya, based on limited signals they receive from the Kremlin. The bottom line is that up until now no Libya policy has been put on paper, but despite that there is a very clear understanding of do’s and don’ts on Libya among these file holders.

As the Libyan National Army’s (LNA) offensive on Tripoli was unfolding in early April Russian diplomats were in contact with both sides to the conflict: Deputy Foreign Minister Mikhail Bogdanov spoke to Gen. Khalifa Hifter and to Ahmed Maiteeq, a member of the Presidential Council in Tripoli, expressing Russia’s commitment to the political process led by the United Nations Support Mission in Libya. Lavrov’s warning against the use of combat aircraft against the LNA was notable in that it perfectly captures the trauma that Russia suffered in 2011 by letting the West decide how the Libyan conflict plays out and that this geopolitical trauma still haunts Russian policymakers. The use of military aircraft against what Russia sees as the legitimate Libyan army is a deja vu of the NATO bombing on Libya in 2011, which is further reinforced by the belief that US Africa Command and the CIA that have active presence in Janzour and Misrata could be pulling strings.

The bleeding wound of humiliation in 2011 explains why Russian officials, including Lavrov in his remarks, blame the NATO-led campaign for what is happening in Tripoli at the moment, as if it helps explain the complex dynamics on the ground. Yet Russia’s official position fails to see beyond that and acknowledge that the problems of today largely take root in Moammar Gadhafi’s deliberate policy of fragmenting the society and hollowing out state institutions in Libya.

Russia’s regional alliances add a layer of complexity to its position on Libya. Speaking in Cairo, Lavrov was clearly mindful of Egypt’s alliance with Hifter. Libya has been on the agenda of the two countries for several years but it is not significant enough for Russia to risk its alliance with Sisi that Putin has been nurturing ever since the Obama administration cut military aid to Cairo in October 2013. Along with Egypt come the United Arab Emirates (UAE) and Saudi Arabia that see Libya as an important front against the Muslim Brotherhood. The two have been actively courting Russia with promises of investment and in the context of Syria and are another reason why Moscow treads cautiously vis-a-vis Hifter, even if it’s unhappy with his offensive.

On the other side of the scale is Turkey, Russia’s most important trade partner in the Middle East. While Ankara’s involvement in the conflict has significantly decreased over recent years, the defeat of the Government of National Accord (GNA) and Misrata would deal a significant blow to long-term influence of Turkey and Qatar in North Africa. It is not surprising that Erdogan called Putin on April 30 to discuss Libya among other things. Even if Russia is not in the driver seat in Libya at the moment, it still has the UN Security Council (UNSC) veto right, which is a valuable asset given recent debates on Libya happening behind closed doors at the Security Council. Russia’s surprising decision to block the UN statement on the Tripoli escalation that would have called on the LNA to halt its offensive on April 7 shows that even if Moscow is not fully engaged on the ground, it can pull strings behind the scenes to at least maintain a diplomatic ambiguity of the UNSC that wouldn’t favor any of the sides.

Moscow sees Hifter’s LNA as a legitimate actor. A source in Moscow familiar with Russian policymaking on Libya told Al-Monitor on condition of anonymity that the Kremlin sees power institutions of Cyrenaica as more legitimate than the internationally imposed GNA and that Hifter’s mandate given by the elected House of Representatives “originates from within Libya itself.” In Russia’s view the Skhirat Agreement is not irrelevant, but it has always been seen as secondary to the power of elected institutions. As per the source, Moscow also attaches a great deal of importance to the fact that unlike the GNA-linked groups the LNA does not discriminate against former Gadhafists, allowing them to serve in the army and consequently enjoys support from the pro-Gadhafi constituency in Tripolitania and in Fezzan.

Thus, it’s not the personality of Hifter that attracts Russia to him. Rather, it is the LNA as a proto-army that he managed to consolidate and a general presence of state in Cyrenaica with the House of Representatives and the interim government of Abdullah al-Thinni. These institutions were major contributing factors when against the backdrop of the liquidity crisis Russia decided to print Libyan dinars for the parallel Central Bank that is headquartered in Benghazi. This move was also one of the reasons why Hifter’s military campaign in Fezzan was successful.

Despite Russia’s readiness to provide diplomatic cover for Hifter, the field marshal himself is the reason why over the past few years Moscow has noticeably distanced itself from him. Hifter has continuously used Russia as a boogeyman to win the hearts and minds of politicians in Europe and the United States. Sources in Moscow claim that virtually all reports on the deployment of the likes of the Wagner PMC as well as Russian tanks and S-300 air defense systems to eastern Libya that appeared in Western media were intentionally fed to them by Hifter’s political advisers, all for the sake of scaring Western officials into supporting the LNA commander.

According to the Russian source, the general has struck multiple informal agreements with his main international backers, including the UAE, France and the United States, on specific economic and political dividends they could receive from the country under his rule. Yet no such agreements were ever offered to the Russian side, specifically in the energy industry that Moscow sees as a prospective area of cooperation. Hifter is after a bigger fish: If he ever manages to establish control over the National Oil Corporation, at which he once failed, Moscow will hardly be his go-to energy partner.

The Tripoli offensive did not change Russia’s view on Hifter. The LNA is still seen as a legitimate force, and Hifter is still seen as part of the solution and part of Libya’s future. What continues to guide its approach to the general is the fear of losing any relevance in the Libyan context if it alienates Hifter, and by extension the entire bureaucracy in Cyrenaica. This is the reason why relatively symbolic diplomatic tricks, such as blocking the UNSC statement condemning Hifter, become an important message to the general. Russia sees no benefit in openly taking sides in Tripoli, but it will be ready to step in diplomatically to not allow the LNA’s defeat because it would ruin the East-West zero-sum confrontation. The Russian side does not expect the LNA to win in Tripoli, nor does Russia want it to. This cycle of escalation is likely to reshuffle political cards in Libya, weakening Hifter and possibly bringing new leaders to the fore in Tripoli, both of which work in Russia’s favor.