New challenges for Moscow with arrest of 'Russian trolls' in Libya

Following the arrest of two Russians by Libyan security forces, the Government of National Accord is trying to sway Moscow away from Khalifa Hifter. 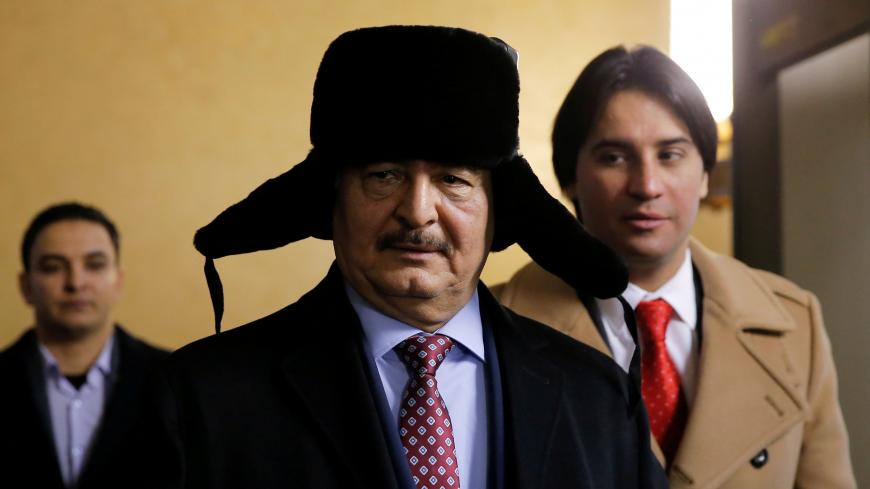 Security forces of Libya's internationally recognized Government of National Accord (GNA) reportedly arrested two Russian men in Tripoli in May, though the arrests were not announced until early July. Tripoli authorities claim that the Russians possessed laptops and memory sticks that revealed their work in a Russian "troll factory" that allegedly sought to influence upcoming elections in Libya and a number of African countries.

The Foundation for National Values Protection, a Russian nongovernmental organization that is a part of Fabrika Trollei — Russian for "troll factory" — confirmed the arrest of two staff members, stating they were apprehended while “carrying out opinion polls.” A letter stamped by the attorney general’s office and later obtained by Bloomberg revealed that the two Russians were involved, with the support of Russian officials, in securing a meeting with Saif al-Islam Gadhafi, the son of Moammar al-Gadhafi.

Fabrika Trollei is an umbrella organization for a collection of media sites and political organizations connected to Yevgeny Prigozhin. The Kremlin-linked Russian tycoon was placed on the US sanctions list last year for his alleged involvement in Russian interference in the 2016 US presidential election.

A Tripoli-based source, who spoke with Al-Monitor on condition of anonymity, said that the two arrested Russians had acted in the interest of Saif al-Islam Gadhafi and Khalifa Hifter. The reports they channeled back to Russia contained distorted information about Libya’s support of the two political figures. They painted the two as “the most popular politicians nationwide,” ranking Saif al-Islam Gadhafi as the most popular. “Such claims bear no relation to reality," the source said, "especially when it comes to Saif al-Islam Gadhafi, who commands support at best among stalwart Gadhafists, a numerically weak fringe group in Libya.”

It is possible that Saif al-Islam Gadhafi is a pet project of Prigozhin, whose own links to the Kremlin could raise concern among GNA representatives that Prigozhin’s “henchmen” had misinterpreted the situation on the ground. Yet the activities of the Foundation for National Values Protection sought to undermine GNA institutions and encouraged Moscow to take a pro-Hifter position in the conflict.

The Russians were arrested at the dawn of Hifter’s offensive on Tripoli, when Russian activities and contacts raised much concern among GNA Prime Minister Fayez al-Sarraj's people. Besides Prigozhin’s links to Saif al-Islam Gadhafi, the Russian tycoon was also present at negotiations with Hifter in Moscow in November 2018. This adds to speculation that Prigozhin’s men may have acted in the interests of Hifter, at least in so far as the troll factory’s participation in a pro-Hifter lobbying and media campaign.

At the same time, the role of private Russian military contractors, also controlled by Prigozhin, in Libyan hostilities remains an open-ended issue. So far, no evidence confirms the contractors' presence on the ground, with the exception of the RSB-Group, which was mandated to remove mines in Libya. This isn’t to say that Russian private military contractors aren't operating in the country, for instance, training Libyan National Army forces. Tripoli is aware of Russia’s “mixed approach” toward Libyan developments and seeks to maintain a constructive dialogue with Moscow. As such, it has refrained from commenting on the current situation.

Unlike groups linked to the United Arab Emirates, Saudi Arabia, France and Egypt, Russian mercenaries have played a minor role — if any — in Libya. Interestingly, a third Russian man in Tripoli —allegedly associated with the troll factory — left the city in May, before his co-workers were arrested. He must have been informed of the looming danger. That is, it was apparent then that the members of the Foundation for National Values ​​Protection staff had been arrested rather than disappeared for other reasons.

However, the information about the two Russian men's fate was made public two months after their arrest. Prigozhin’s agencies must have wished to prevent the case from attracting publicity. This indirectly implies that their activities in Libya went contrary to the interests of the GNA and may have failed to receive Moscow’s formal approval. It was only after Bloomberg's reporting on the detained Russians that top Russian officials, including Kremlin spokesman Dmitry Peskov, voiced concern about the men. Nevertheless, the issue may have been discussed behind closed doors before.

The arrest of the troll factory members may also be a message to Russia's top leadership to curb the pro-Hifter faction in Russia. The matter also allows the GNA to start a more substantive dialogue with Moscow, to step up bilateral interaction and to eventually try to change Russia’s approach. Moreover, the GNA does not regard the activities of Prigozhin’s agencies in Libya as necessarily indicative of Moscow’s formal stance. As of now, it is vital for Tripoli to scupper Hifter’s chances of securing military and political support.

After Hifter's Libyan National Army lost its main base in western Libya, Gharyan, during a GNA operation, the strongman's positions have become critical amid the continued GNA military offensive. Hifter's fate, more than ever, depends on foreign assistance. In July, Hifter or his representatives conducted informal visits in the UAE and Saudi Arabia. Following these meetings, he may have secured at least one more financial installment and started to recruit additional forces in eastern Libya, as well as in neighboring Sudan and Chad.

Hifter is pinning his hopes on Egypt, which is deploying troops along the Libyan border. A direct Egyptian intervention is theoretically possible but unlikely to occur. In the meantime, Egyptian troops may engage in hostilities on Hifter’s side under the LNA banner. Should Russia leave the ranks of Hifter’s political backers, it would be an unquestionable triumph for Tripoli, which has consistently tried to force Hifter's troops out of western Libya.

Another element may be complicating the situation for Moscow: the mounting threat of a collision in the Libyan battlefield involving Turkey, on the one hand, and the UAE, Saudi Arabia and Egypt, on the other. As Hifter’s plane shuttled between Cairo, Riyadh and Abu Dhabi, Prime Minister Sarraj met with President Recep Tayyip Erdogan in Turkey. Any involvement of Russian agencies, however informal, in the Libyan developments on Hifter’s side may trigger new tensions between Moscow and Ankara, apart from those over Syria’s Idlib. It is noteworthy that Libya has increasingly become a topic of conversation between Putin and Erdogan in their phone calls.

While Russia may be ready to boost its support for Hifter in response to the constructive attitude of the trio to Bashar al-Assad’s regime, it has become more difficult for Moscow to act against the backdrop of Hifter’s military defeats. Russia may become more mindful of Turkish interests in Libya, and try to relate the Libyan issue to Syria, especially Idlib, to expand ground for mutually beneficial deals.