The visit of Libyan Prime Minister Fayez al-Sarraj to Sochi opens some engagement opportunities between Moscow and Tripoli but also exposes challenges. 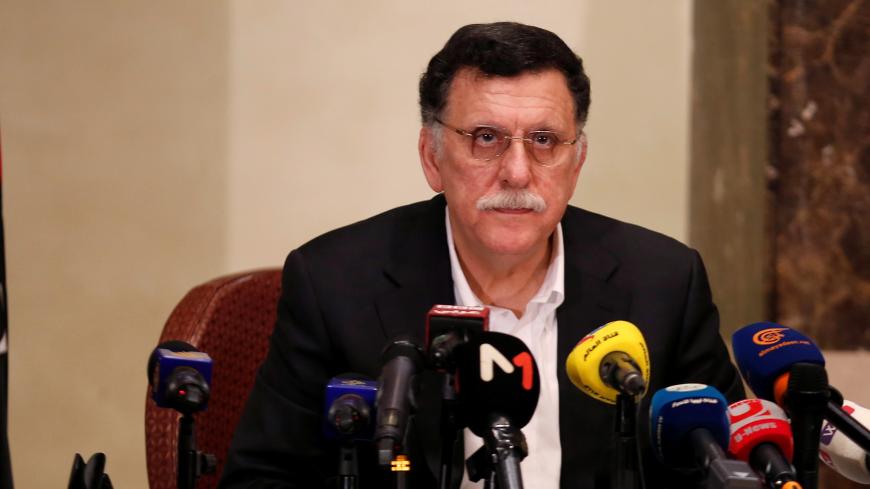 Following the visit to Russia by Fayez al-Sarraj, the leader of the Government of National Accord in Libya, Moscow and Tripoli plan to sign a contract on shipping 1 million tons of shipping of Russian wheat. Sarraj came to Sochi for the Russia-Africa Summit.

The head of the Russian contact group for Libyan conflict resolution, Lev Dengov, later told the Kommersant newspaper that the  one-year agreement may be signed in a month. Supposedly it would be implemented by the end of this year.

The visit of the Government of National Accord's prime minister to Sochi should be viewed as Moscow’s gesture to acknowledge his legitimacy as a leader. However, certain representatives of the pro-Khalifa Hifter “interim government” from eastern Libya also arrived in Russia, although this team’s level was significantly lower — it was led by Foreign Minister Abdel Hadi Hwej. A source with knowledge of the situation who spoke with Al-Monitor on condition of anonymity said the Russian side had objected to the presence of leaders of structures other than the Government of National Accord at the forum; thus, neither the commander of Libyan National Army (Hifter) nor the head of the interim government, Abdullah al-Thani, attended.

Sarraj’s visit to Sochi was able to compensate for Hifter’s covert visits to Moscow in a way. It is noteworthy that the head of the Government of National Accord had been invited officially, in contrast to Hifter’s trips being kept under wraps. Thus, one can conclude that the faction in Russia that promotes balance in relations with Tripoli and Tobruk and is willing to develop contacts with the Government of National Accord — with the head of the Chechen Republic, Ramzan Kadyrov, as the faction's most prominent leader — has managed to push its agenda forward. At the same time, some influential actors among the Russian elite are still striving to persuade Kremlin to rely on Hifter and to go as far as to break all contacts with the Government of National Accord, thus adopting the same strategy as Egypt and the UAE.

Jalel Harchaoui, a researcher who studies Libyan security and politics, said Russian elites have disagreements over the Libya conflict “because this dynamic had no equivalent in Ukraine or Syria.”

For instance, some military and security officials, weapon industry tycoons and entrepreneurs involved in the activities of private force companies are interested in the expansion of Russia’s military support of Hifter, as this could lead to new deals for Russian private military companies, transport companies and arms suppliers before the peace process starts. This policy could eventually allow the creation of military bases in the North African nation, much like the ones established by the UAE. Indeed, Libya has already become a significant foothold for Russian defense and security structures as a transit base facilitating a military presence south of the Sahara and in Venezuela.

Thus, in order to undermine relations between Moscow and Tripoli, Russian interest groups supporting Hifter launched a media campaign seeking to sabotage the Government of National Accord leader’s visit to Sochi.

One factor driving a wedge between the Government of National Accord and Moscow were the Russian mercenaries who had allegedly taken part in the Libyan National Army’s battles against Sarraj near Tripoli.

Emadeddin Badi, a nonresident scholar at the Middle East Institute, told Al-Monitor that “Russians' direct engagement on the front line only occurred recently, after Kani's death.” Mohsen al-Kani was head of the Kaniyat armed group, which fought for the eastern Libyan forces.

Badi said Russians were instrumental in the Libyan National Army's Sept. 21 push on Yarmouk "and were spotted there. The sniping capabilities reported by those mobilized that day also far exceed those of [the Libyan National Army's] rank and file. This also does not discount that Wagner may have had an advisory role before that date,” he said. Wagner is a Russian private military company.

It should be considered, however, that Sarraj was likely informed about the presence of Russian private military companies in areas under the Libyan National Army’s control. The scope of their activities in Libya and Syria is substantially different. In Syria, the private military companies has frequently acted as land assault formations within the Russian troop contingent — a non-traditional role for such structures.

In Libya, they are not bearing these functions as Russia does not have an actual military presence there. Thus, some private military companies came to Libya under contract for specific jobs — for instance, the RSB-Group was responsible for mine removal. There were other covert, but traditional actions, of private military companies, such as providing security for oil facilities, guarding high-level government officials and training personnel.

Moreover, Russian specialists repair damaged weapons and equipment of the Libyan National Army troops; transport aircraft belonging to semi-legal corporations deliver goods for this structure. Though Tripoli generally prefers to ignore these actions, Sarraj could have seen the moment when the Russian mercenaries went out to the battlefield alongside Hifter as a “thin red line” being crossed. However, when the proof had been published, the Government of National Accord leader avoided making any harsh statements and certainly did not even consider breaking contacts with Moscow; on the contrary, he chose to visit Sochi.

It is possible that the mere appearance of private military companies on the front line near Tripoli were supposed to sabotage the dialogue between Russia and the Government of National Accord. Most likely, mercenaries' actions became the main issue discussed during Sarraj’s private meetings with Russian representatives within the forum’s framework.

The debates over Russian private military companies’ actions in the battle for Tripoli were accompanied with a media campaign aimed to defame the Government of National Accord, launched by certain media such as FAN News and NGOs such as the Foundation for National Values Protection — both part of the “business empire” of Yevgeny Prigozhin, the owner of PMC Wagner, also known as the Wagner Group.

For instance, some publications openly called the Government of National Accord “a terrorist structure,” while Sarraj was dubbed “a gang boss” and the relations between Moscow and this “gang of terrorists” were viewed as unacceptable. This initiative found support among some Russian political experts and State Duma members. According to these media, another reason to ban Sarraj from the summit in Sochi was the fact that in May, the security structures of the Government of National Accord had arrested two officials of the Foundation for National Values Protection, keeping them in captivity to this day, as Al-Monitor has previously reported.

The detention controversy was discussed during Sarraj’s negotiations in Sochi. As a result, Dengov told journalists, all issues involving the two Russian citizens under arrest would be resolved according to Libyan law. “We are closely monitoring the situation,” Dengov said.

Thus, the attempts to destroy the relationships between Moscow and Tripoli made by pro-Hifter lobby groups inside Russia have not yet had success. That said, further measures of this type should be expected.

A source in Russian diplomatic circles who spoke to Al-Monitor not for attribution said Russian officials representing the interests of the pro-Hifter “interim government” tried to place interviews and press conferences with eastern Libyan officials onto the agenda of the Sochi forum. During these events, the officials reportedly would have spoken about the transfer of Russian jihadis from the Syrian region of Idlib through Turkey to Tripoli, where they had allegedly joined Government of National Accord forces. The Kremlin finds this issue highly sensitive, with President Vladimir Putin himself mentioning it on a few occasions.

However, the participation of Russian nationals in the battle for Tripoli, particularly within any terrorist structures, is not yet proved; though if proof is published, the Russian side may toughen its approach to the Government of National Accord. Thus, it is quite possible that certain Russian nongovernmental organizations that have access to Tripoli in spite of their actions defaming the Government of National Accord will utilize this opportunity to find or fabricate proof of the presence of jihadis with Russian citizenship among the forces protecting the capital. Such circumstances could clear the way for Russian private military companies to play a more prominent role in the Libyan National Army’s campaigns.