Has Russia adjusted its Libya vision?

Moscow seemingly embraced the new proposal on Libya peace put out by the head of the Government of National Accord but this doesn't necessarily mean Russia has given up on strongman Khalifa Hifter. 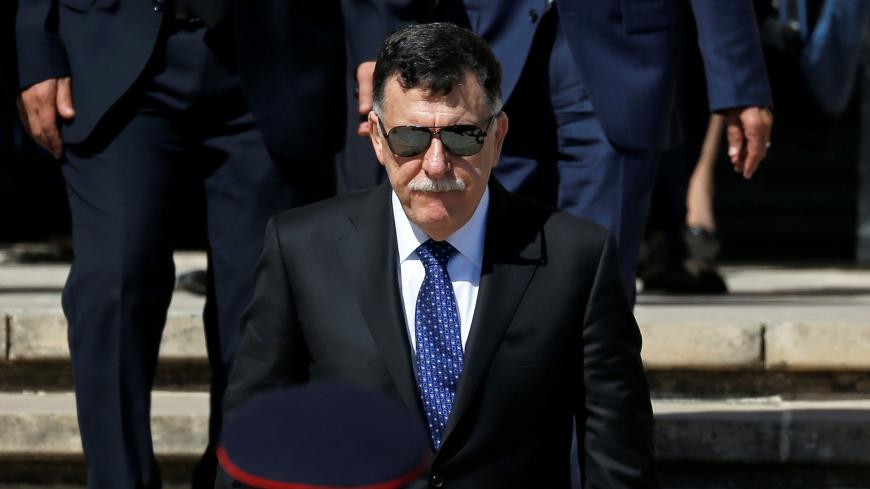 On June 16, Fayez al-Sarraj, head of the Government of National Accord, proposed a plan to resolve Libya’s current crisis. In a TV address, he called for holding a conference for Libyan parties in coordination with the United Nations mission in the country. The meeting would bring together all Libyan forces seeking a peaceful and democratic solution to the crisis.

“There can be no room for authoritarians and dictators whose hands have been covered in the blood of the Libyan people,” he said. The statement was interpreted as a dismissal of Khalifa Hifter, commander of the Libyan National Army.

The conference's role would be to help draft yet another road map for Libya and agree upon a constitutional basis for holding presidential and parliamentary elections before the end of the year.

These suggestions by Sarraj can hardly be implemented without substantial changes. At the same time, they could become a foundation for further efforts that can plan out future stages of the Libyan reconciliation process. While Hifter has not provided any alternative plan other than seizing control of Tripoli by force, Sarraj’s views appear constructive. They are also aimed at boosting his ratings and improving his position in the eyes of the international community.

It is particularly noteworthy that this initiative was proposed while Hifter’s Libyan National Army has failed to show any military success for a while. It is significant that soon after Sarraj had publicly disclosed his peace-making project, the Government of National Accord’s forces launched an assault on Tripoli International Airport — the Libyan National Army’s crucial foothold in close proximity to the capital. If the airport returns to the control of the Government of National Accord, the division of Hifter’s troops deployed near Tripoli, in the Wadi Rabiya and Ain Zarah areas, will face a threat of being surrounded. The fighting for this strategic location has been going on since June 19.

The standing of the Government of National Accord also appears to have been helped by the open support of Turkey. Turkish President Recep Tayyip Erdogan said his country has provided the government in Tripoli with weaponry and would be willing to continue the trade if the Government of National Accord requests it. Erdogan pointed out that Ankara and Tripoli had signed an agreement on security cooperation, adding that the arms sales are a measure needed to maintain the status quo. This statement, which basically is direct proof that Turkey is violating the UN embargo, most likely could only have been once the threat to Tripoli had been averted; the factions Ankara backs have seized the initiative. Therefore, Erdogan’s words sought to demonstrate Turkey’s contribution to the success of its allies in Libya.

While Hifter fails to make military achievements, Russia also ceases to openly show him gestures of support as it did when his assault on the capital began. Moscow — unlike, for instance, Paris — is not willing now to hold official meetings with Hifter following the launch of the Libyan National Army’s campaign in Tripoli. At the same time, the field marshal’s latest covert visit to Russia last month also was hardly successful. Sources privy to the visit and associated discussions told Al-Monitor on condition of anonymity that contrary to the reports of pro-Libyan National Army media, the military leader “certainly didn’t meet President [Vladimir] Putin" and did not see Defense Minister Sergei Shoigu either. While the source didn’t indicate whom exactly Hifter met while in Moscow, it’s believed his contacts came down to negotiations with Mikhail Bogdanov, deputy foreign minister and special presidential envoy for the Middle East.

Moreover, speculation about Russian military aid for the Libyan National Army may be based on false conclusions. The Libyan media published pictures of a Russian-made missile system, Pantsir, handed over to the Libyan National Army as a response to Turkish supplies of fighter drones to Government of National Accord forces. However, the system is likely to be traced back to the United Arab Emirates, considering that it was mounted on a MAN truck. Russia sold this system to the UAE in 2000.

Generally, the Russian side is becoming more positive about the initiatives proposed by the head of the Government of National Accord. A certain shift in Russia’s approach may be further observed judging from the statements by the head of the Russian contact group on Libya, Lev Dengov. He said Moscow did not agree with Hifter’s account that Tripoli was being controlled by “terrorists” and also did not support Hifter's idea of Tripoli's “liberation” by the Libyan National Army. On the contrary, the Russian diplomat stressed the need to cooperate with the administration in Tripoli in order to eliminate terrorism.

Dengov said Hifter “defined his so-called mission as saving Libya from terrorists. Unfortunately, we cannot identify specific groups he considers terrorist. Currently, I do not see any particular names of people and organizations, united under authority of any particular leaders or militant gangs. In any case, such actions should be coordinated with Tripoli, with the Government of National Accord, as radicals are enemies for all Libyans. Thus, the people of Libya cannot oppose terrorism on one hand and support it on the other hand simultaneously.”

Furthermore, before the announcement of the plan to resolve the crisis, the Government of National Accord had informed the Russian side about it through Foreign Minister Mohamed Siala. On June 13, Bogdanov and Siala discussed the project over the phone, the Russian Foreign Ministry said. The Government of National Accord thus probably tried to test Russia’s reaction to its initiatives before disclosing them to the general public.

In its response to Russia’s News.ru media outlet, Russia's Foreign Ministry said Sarraj's June 16 statement had been “taken into account.” Russia’s reaction was subsequently seen as “generally supportive” of the proposals.

“We assume that currently the main objective is to put an end to the violent confrontation in Libya and establish a sustainable, inclusive political process ultimately aimed at overcoming the divisions in the country and to create unified, efficient government institutions,” the ministry told News.ru.

“In this context, we confirm our principled position that supports abstaining from violent methods of power struggle and views the peaceful resolution of the prolonged crisis in Libya, led by Libyans themselves, as the sole path with no alternative,” it added.

By promoting a peaceful resolution, Russia could receive new opportunities to become a referee. When Sarraj confirmed his willingness to restart dialogue, Moscow, Paris and Rome signaled to Hifter the need to embrace this initiative while also moving to convince Sarraj to accept Hifter as a participant in the process. In any case, Hifter is most likely to insist on maintaining his positions around Tripoli, whereas Sarraj will stress the need for the Libyan National Army troops to be withdrawn. But it is this status quo that may help effectively return the parties to the negotiation table.

At the same time, Moscow’s supportive gestures toward Tripoli are still quite weak. Although it is possible that while the campaign drags on, Moscow will be more accommodating to Tripoli’s interests, Russia may equally move to expand its support for Hifter — including clandestine military aid. The prospects heavily depend on the further events of the campaign and Russia’s position is now primarily defined by its reaction to the achievements and failures of the sides confronting each other in their battle for Tripoli.