Russia weighs its role as arbiter in Libya

As Moscow works to shore up its influence in bringing Libya’s rival governments together, it is examining whether Gen. Khalifa Hifter is more of an asset or a liability. 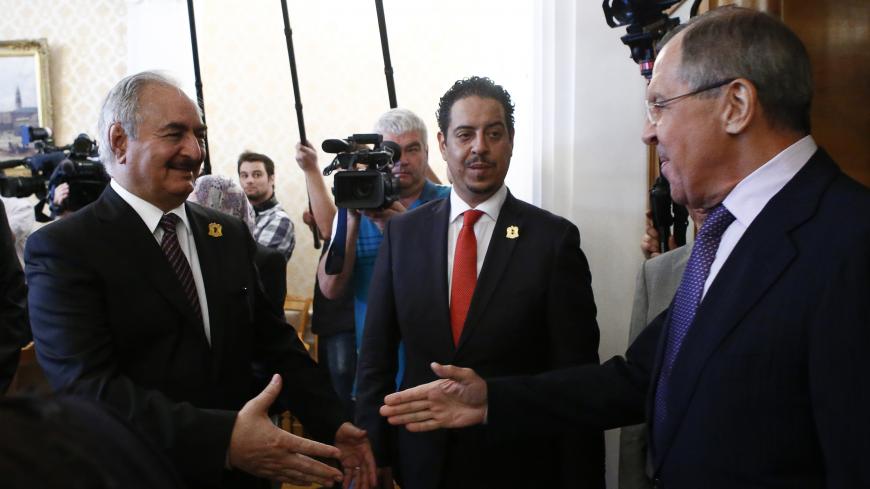 After being absent from the divided Libyan political landscape for months, Moscow again made headlines by hosting Gen. Khalifa Hifter for a three-day visit earlier this month, meeting with the foreign and defense ministers, his usual Russian interlocutors. Once again, the general’s visit had experts debating exactly what role Russia plays in mentoring Hifter and whether Russia really sees him as its “point-man” in Libya.

The focus of Hifter’s visit resembled that of his previous trips to the Russian capital, touching on the security situation in Libya. The general reiterated his request for Russian military aid to his Libyan National Army, despite countless previous rejections. His request remains unfulfilled. Speaking to Russian Foreign Minister Sergey Lavrov, Hifter expressed the hope that Russia would become involved in the process of national reconciliation in Libya. All in all, it would have been a routine visit, absent any remarkable developments, had it not been for the context in which the trip took place.

Hifter, who leads one of the sides vying for control of the Libyan government in Tobruk, was greeted at the airport by the Libyan ambassador to Russia, who represents the interests of the other side, the UN-backed so-called unity government in Tripoli, led by Prime Minister Fayez al-Sarraj. It was not an effort by Sarraj to reach out, but Russia’s attempt to generate a dialogue between the two sides. The Tripoli government formally took over the Libyan Embassy in Moscow in early August, with Russia’s consent, and representatives of the Tobruk-based authorities followed soon thereafter to claim space of its own.

Lev Dengov, head of Russia’s contact group for a Libyan settlement, explained in a recent interview with the Interfax news agency, “They share the same building, by way of which we are bringing them closer to each other and making them work together.”

Ahead of Hifter’s trip, Russian officials suggested that perhaps both the general and Sarraj could make it to Moscow for simultaneous talks. That idea was quickly dismissed, however. While commenting on Hifter’s meetings with Lavrov and Russian Defense Minister Sergei Shoigu, Dengov said that Sarraj might travel to Russia as soon as September — he last visited in March — to discuss a new round of direct talks with Hifter in Moscow. Having Moscow emerge as the main intermediary for Tripoli and Tobruk is probably the desired, and arguably the most realistic, outcome of the Libyan policy Russian diplomats are working toward at the moment.

Russia’s timing in expediting talks between Hifter and Sarraj in Moscow is curious. It is probably because movement to settle the Libyan conflict has accelerated significantly in recent weeks, while Russia has remained relatively uninvolved. Moscow had publicly welcomed the emergence of a new platform for Libyan dialogue in Paris, where the two sides agreed on a cease-fire July 25. Moscow felt, however, that France, which had previously played only a marginal role, was trying to hijack the mediation effort Russia had been making for the past year. While the Kremlin boasts of having established strong ties with all parties to the Libyan conflict, it has not managed to position itself as the main mediator, while France as well as the United Arab Emirates (UAE) have succeeded in doing exactly that.

After Hifter and Sarraj’s Paris meeting, which observers interpreted as a diplomatic success, the conflict quickly escalated, as Sarraj reportedly authorized Italian naval vessels to sail into Libyan waters to help control the flow of migrants heading for Italy. The move sparked dissent in both Tobruk and Tripoli, with Hifter accusing Sarraj of authorizing an invasion of the country’s territory. Sarraj responded that he had only requested limited support.

While Italian vessels are only supposed to patrol the Libyan coast, this is an alarming development for Russia, which has mulled making its own presence known along the coast since 2015. A short detour to Tobruk by the Russian aircraft carrier Admiral Kuznetsov in January 2017 was the boldest statement by the military in Libya, as no one was expecting such a move.

Moscow is not ready to commit to maintaining Libya’s maritime security, as it sees no clear political benefit in doing so as long as the flow of migrants from Libya to Europe can be used as leverage in talks with the European Union. In the meantime, against all odds, Italy took matters into its own hands and decided to stop the influx of migrants from Africa. This killed Russia’s hope that no country would opt for a military deployment to Libya and thereby allow it to stake sole claim to leading the effort to resolve the Libyan crisis.

With Ghassan Salame replacing Martin Kobler as head of the United Nations Support Mission in Libya, hopes are high that the political peace process will now start gaining traction. Salame, a former Lebanese culture minister, is, however, a dark horse to the Russians. He has no prior experience engaging with Russian diplomats. In fact, a Russian diplomat told Al-Monitor that Salame's background is chiefly with Western nongovernmental organizations, such as the International Crisis Group and the Center for Humanitarian Dialogue, which Russia treats with a great deal of suspicion. Salame is expected to visit Moscow soon, Lavrov told the media during Hifter’s visit.

By hosting Hifter in Moscow ahead of the new envoy’s visit, the Kremlin is emerging on his radar and sending him a very clear message that Russian support for Salame’s Libyan initiatives will be crucial. Moreover, having Hifter meet the Russian defense minister in Moscow again makes it look as if Russia is flirting with the idea of getting involved in the conflict militarily, something that worries Western powers.

The trip to Moscow allowed Hifter to pursue his own interests as well. No doubt he has noticed that Russia has significantly changed its stance on the Libyan conflict and has moved to somewhat distance itself from the general, at least publicly. On the one hand, the Kremlin has gone to great lengths to keep Hifter in the diplomatic domain, but on the other hand it has not given him what he has asked for in return, and this appears to be unsettling to him. The Tobruk general marketed himself in Russia as the conqueror of extremists in Libya, and in return he expected a real show of support from Russia.

“You probably know that the Libyan National Army is making a huge sacrifice to destroy terrorism,” Hifter told Lavrov. “The fierce battles have been ongoing for three months despite the continuing arms embargo and unlimited support of terrorists by finance and weapons.”

Hifter was talking about the UN-backed international arms embargo against him and his army. The United Nations says the United Arab Emirates has been supplying Hifter with weapons in violation of the embargo.

Russia faces a dilemma in its relations with the general. In his recent interview with the daily Kommersant, Dengov dismissed Hifter’s claims of having liberated 90% of eastern Libyan from terrorists. Commenting on the contact group’s efforts to communicate with all forces fighting IS in Libya, Dengov said, “We wanted to see them [the anti-IS militias] get to know these people and verify the information that they played the decisive role in destroying IS in Libya — and not Khalifa Hifter, who attributed these merits to himself.”

At the same time, Moscow cannot drop its support of the general. He is the best chance Russia has to remain relevant in Libya. Without a hard element to its Libya policy — which at this time is Hifter’s army — the Kremlin’s international standing decreases significantly, both in Libya and in the broader region.

Meanwhile, Hifter is dealing with the same conundrum in his relations with Moscow. He is desperate for Russian weapons that would solidify his alliance with the Kremlin and position him above his domestic competitors. By going too far with his demands, however, the general risks alienating Moscow entirely, especially ahead of looming talks on potential amendments to the Libyan Political Agreement, the pact signed in 2015 creating the unity government.