Russia’s interest in Libya evolves as Gen. Khalifa Hifter transforms from a strongman for the army into a politician. 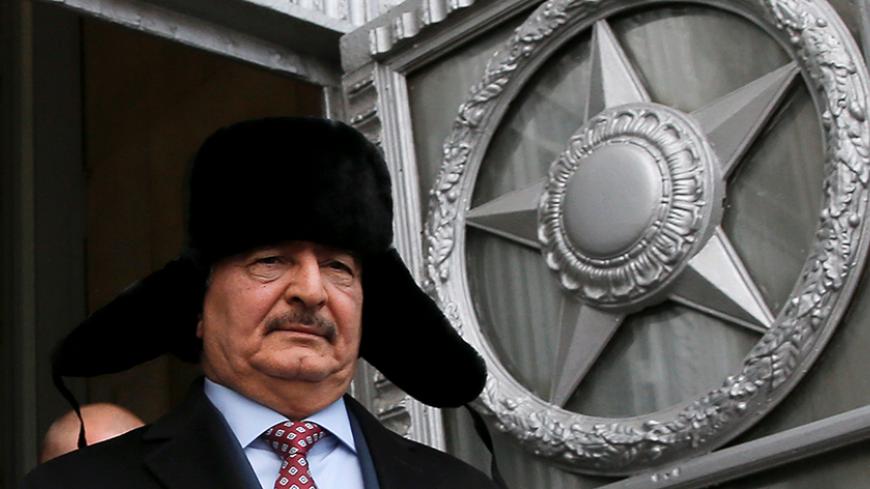 Gen. Khalifa Hifter, a commander in the Libyan National Army, leaves after a meeting with Russian Foreign Minister Sergey Lavrov in Moscow, Nov. 29, 2016.

The image of Libyan Gen. Khalifa Hifter sporting a Russian ushanka hat as he left the building of the Russian Foreign Ministry on his recent visit to Moscow invokes memories of Cold War era revolutionaries from the Middle East flocking to Moscow in search of political support and military aid. It was Hifter’s second trip to Russia this year, the kind of intensity of visits not every leader in the Middle East would dare to demonstrate today.

Russia’s relationship with Hifter has become more than just diplomatic courtesy. This dynamic is a two-way street in which both sides see beneficial opportunities. Whenever a certain visit goes against strict rules of diplomatic protocol, it indicates an important trend. In the case of Hifter, who is not a head of state, the trend is the significance that Russia attaches to his authority in Libya.

The Kremlin’s official position regarding Hifter’s regular contacts with the Russian authorities is that it is part of a wider process to engage with various political factions in Libya. In fact, when a reporter asked about the general’s visit to Moscow, Maria Zakharova, a spokeswoman for the Russian Foreign Ministry, criticized him for completely ignoring reports of Russian official contacts with the Unity Government in Tripoli. But the Moscow-Hifter dynamic seems to be significantly more exposed to public attention.

Hifter’s recent visit to Moscow was noticeably different than his visit just a few months ago. The general replaced his army uniform, his signature image, for a suit, which many have interpreted as an attempt to position himself as a politician rather than a strongman from the army. This may be exactly what Russia expected from Hifter since his last visit to Moscow in June. Following a flurry of high-level meetings at the Foreign Ministry, the Defense Ministry and the UN Security Council, Hifter made statements that marked a change in his vision of Russia’s role in the Libyan war. “In the future, when an arms embargo will be lifted and the deliveries of advanced weapons begin, we will need Russian weapons experts for military training,” he told Russian journalists. The statement is a departure from the general’s position in June when he requested the delivery of Russian arms despite the existing embargo. The leader of the Libyan National Army also promised billions worth of deals for Russian companies in restoring the country’s infrastructure and developing its oil deposits.

Hifter’s evolution goes along the lines of how Moscow sees his role in Libya, revealing just how much sway the Russian authorities have over the general. Before the Russian military campaign in Syria, Russian authorities were keenly flirting with the idea of fighting extremists in Libya. In early 2015, Russian Ambassador to the UN Vitaly Churkin told journalists they were planning a Russian naval blockade off the Libyan coast to prevent the Islamic State (IS) from receiving weapons by sea and to prevent arms deliveries to the internationally backed government. With the launch of the Syrian campaign, Russia has been walking a fine line between a limited military operation and a quagmire. The Libyan context is equally as challenging as the Syrian one for Moscow. Coupled with logistical troubles associated with a possible operation there, it would be certain to turn into a quagmire for Russia.

In other words, Syria gave a timely reality check to Russia’s possible military ambitions in Libya. This doesn’t mean, however, that Russia will give up on Libya altogether, but only that it puts politics over the military in the country at the moment. Militarily, Hifter is not in dire need for Russian aid at the moment. Amid fierce fighting that is raging between militias in Tripoli, exposing the limitations of the unity government’s control, Hifter in the east of the country is making significant advances against forces allied with IS in Benghazi, positioning his army as a primary front against extremists. Martin Kobler, the UN envoy for Libya, indicated in Rome last week that the general may now be seen as part of the political process in Libya. Unconfirmed reports also hint that recognizing Hifter’s influence, Kobler’s office may be pushing for amendments to the political agreement that would give Hifter a share of political power in Tripoli. A leading role in the Tripoli government is the key reason why Hifter has been preventing the House of Representatives based in Tobruk from voting on the UN-backed unity government for almost a year now.

While military considerations are a strong element in the relationship between Moscow and Hifter, interpreting Russia’s interests in Libya through the same lens would be a mistake. Following the general’s trip to Russia, commentators reignited the talk of a possible Russian naval base in Libya; some even suggested that Benghazi could host one. The rumors of a Russian base on the Libyan coast have been swirling since 2008, when Col. Moammar Gadhafi proposed the idea to the Russians, yet no practical steps were taken back then. The need for a naval base in 2008 was arguably far more acute for Moscow than it is today. Syria’s Tartus base, which is currently undergoing an upgrade, was recently named the Russian permanent naval base, albeit out of need rather than a careful calculation, essentially fulfilling the role of a stronghold in the Mediterranean for Russia. Libya’s Benghazi in that regard is a less safe option and is too isolated to exercise proper control over it.

Under Gadhafi, Libya was one of the few prospective cash-paying clients willing to purchase Russian weaponry. In 2008, Moscow canceled $4.5 billion of Libyan debt in exchange for arms deals that were reportedly signed in 2011, just before Gadhafi was overthrown. The deals that were worth between $4 billion and $10 billion have never been completed, and Russia still looks at Libya as a state that could one day deliver on these agreements. While the Libyan National Army’s mostly Soviet equipment keeps degrading, Hifter, who remains outside the Libyan government structure, will not have the resources to pay for new Russian weapons, even if the embargo is lifted.

The transformation of Hifter’s role hints at the evolution of Russian interests in Libya. Because of Russia’s Syrian operation, Libya is no longer seen strictly as a stronghold for projecting military power. Currently, Moscow sees the development of a long-term political partnership with Hifter as a more beneficial option that could facilitate both possible military objectives in the Mediterranean as well as lucrative deals associated with the reconstruction of the country and the re-emergence of its oil industry.