Despite some speculation, Gen. Khalifa Hifter's sudden visit to Moscow says less about impending arms deals than about Russia's long-term strategy in Libya and the region. 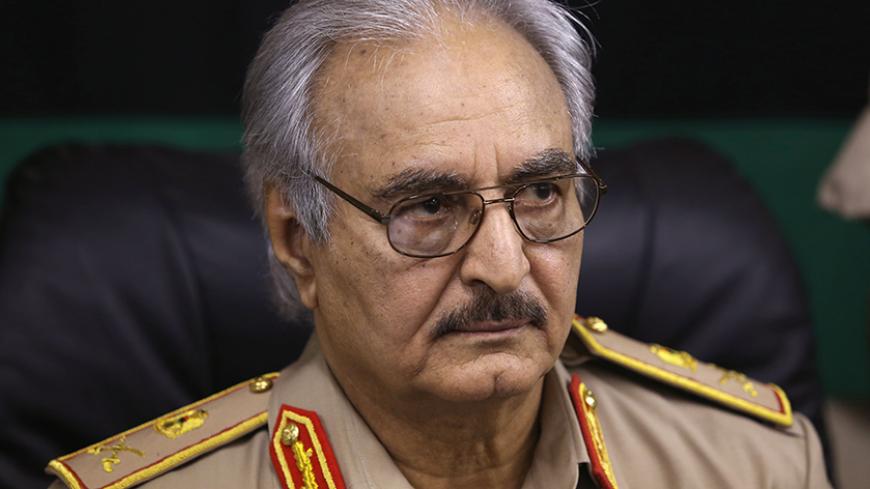 When Gen. Khalifa Hifter arrived in Moscow on an unannounced visit in late June, experts interpreted it as yet another attempt to secure an arms-transfer deal with the Kremlin. However, the Russian ambassador to Libya was quick to dismiss the speculation. “Unless the Security Council lifts or at least eases the embargo, there can be no talk of Russian weapons deliveries to Libya,” Ambassador Ivan Molotov told Russian journalists.

Hifter's reception in Russia was unusually high profile for such a controversial and divisive figure. He was received by the foreign affairs and defense ministers, but most importantly by Nikolai Patrushev, the secretary of the Security Council, a key decision-making body close to the president. In other words, the message that Hifter received in Moscow likely came from Vladimir Putin himself.

Interpreting Russian interests in Libya purely in terms of the profit it could make from arms trade there would be simplistic. The diplomatic efforts that Moscow has been making on the Libyan front lately are far-reaching for a power that simply wants to sell its weapons. It may in fact be the case that the Kremlin is playing a long game in Libya, seeking a place in its post-conflict political reconstruction. Unlike in Syria, where Russia has had a solid alliance with the Assad family for decades, after Moammar Gadhafi, Moscow did not succeed in finding a loyal political ally in Libya. Many in Moscow believe that Hifter's vast network of supporters and military power could make him Putin’s point man in Libya.

Russia’s political intentions toward Libya are no secret to foreign diplomats in Moscow. As a result of a shake-up within the Russian Foreign Ministry late last year, Deputy Foreign Minister Mikhail Bogdanov, who had spearheaded the Kremlin’s push for diplomatic talks over Syria (the Moscow I and II conferences), was put in charge of the Libya file. By the Kremlin’s rules of the game, this appointment means that it is getting serious about diplomacy in Libya, in which case Russia needs a stable and loyal ally there. Hifter seems an ideal candidate for that role because of his military background that helps him share a language with the officials in the Kremlin, most of whom, like Hifter, received Soviet military training.

Putin himself finds it convenient to deal with soldiers-turned-politicians. Egyptian President Abdel Fattah al-Sisi is a case in point: Ever since he visited Moscow in the capacity of Egypt’s defense minister and later became president, the bilateral relationship has returned to levels unseen since the rule of President Gamal Abdel Nasser. Similarly, Russia has an amicable relationship with Jordan, and despite King Abdullah’s Western military training, he and Putin have hit it off.

Despite the two decades that he spent in the United States and his role in Gadhafi’s ouster, Hifter could prove to be the loyal and controllable politician that Moscow is looking for. He found himself in a position where he has more opponents than allies both inside and outside Libya. In fact some in the West believe that Hifter, who opposes the unity government, does all he can to prevent the House of Representatives (HoR) from granting the Tripoli government a vote of confidence.

With all its sway over Hifter, so far Moscow has not felt compelled to demand that he not impede the HoR from attaining the necessary quorum to vote on the proposed Cabinet. The Russian ambassador to Libya recently said, “The parliament in Tobruk is the legitimately elected legislative body,” while the government of Prime Minister Fayez al-Sarraj is also “in principle legitimate.” Seeing the legitimacy of a government as an adjustable construct, Russia may have Hifter use his authority to delay the HoR vote for as long as it needs for him to mature as a political figure.

Following Hifter’s visit to Moscow, the Russian press quoted a diplomatic source as saying that Aguila Saleh Issa, the HoR chairman, would soon come to Russia to meet with the Russian leadership as well. If this meeting is indeed in the cards, Hifter has a key role to play in arranging it and would act as an intermediary. More importantly, however, Issa’s trip to Moscow would signify the emergence of a solid political alliance between the Kremlin and the Tobruk political elite.

The question arises, then, why has the Kremlin become so active on the Libyan diplomatic front all of a sudden, when there is nothing for it to gain or lose in this crisis at the moment? Unlike Syria, Libya should be perceived as a more long-term arena for Russia. Financially Moscow did lose billions of dollars in failed oil and arms-transfer deals following the fall of the Gadhafi regime, but even this is not the key calculation that guides policy-makers in Russia. The Syrian crisis and Moscow’s diplomatic and military involvement in it may have been a costly affair, but it has allowed Russia to emerge as a key player in the Middle East in just a few months and back its geopolitical ambitions with hard arguments. The military campaign, coupled with Moscow’s clout over President Bashar al-Assad, had a far-reaching effect: The Kremlin’s point of view on Middle Eastern issues that do not necessarily pertain to Syria is now being taken seriously while more and more local politicians are abandoning Washington and flocking to Moscow in a bid for Putin’s support.

The Russian ambassador to Libya probably put it best when he said, “It is not Libya’s opposing sides but the whole of Libya that seeks Russia’s support. They understand that without us it would be very difficult to overcome the existing crisis. It is therefore quite natural that different parties want to meet with us and ask us for moral and material support.”

Molotov’s statement gives a hint about the Kremlin’s intentions in the region: For it, Libya is not the end game but a tool to help it stay relevant in Middle Eastern affairs. Contributing to the resolution of the political crisis in Libya, one that is increasingly becoming a contributing factor to the spread of the Islamic State in this country, may benefit Russia’s image of a champion in the global fight against terrorism and put it on par with the United States in this region.