For all the uncertainty surrounding Russia's presence in Libya, there are some policy drivers to be watched. 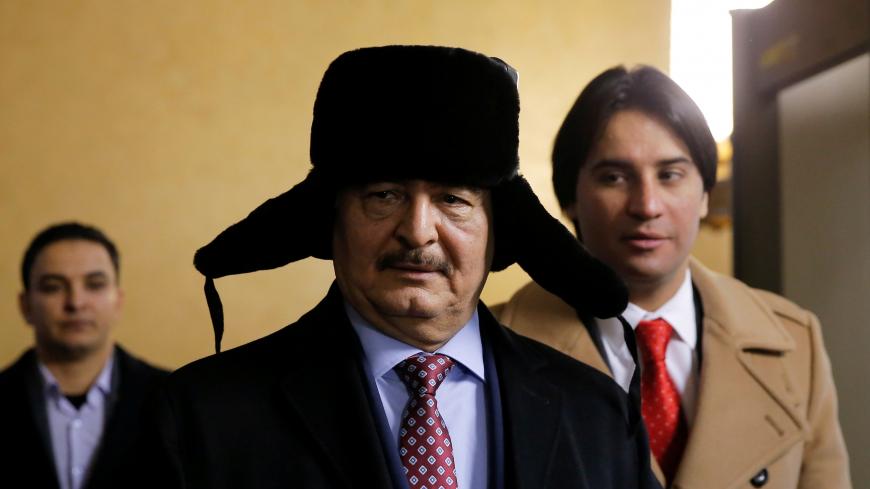 ROME — On Dec. 7, US Army Gen. Stephen Townsend, commander of the United States Africa Command, said that an American drone reported lost near Libya’s capital, Tripoli, last month was in fact shot down by Russian air defenses. Townsend said the operators of the air defenses at the time “didn’t know it was a US remotely piloted aircraft when they fired on it.”

“But they certainly know who it belongs to now and they are refusing to return it [the drone’s wreckage]. They say they don’t know where it is but I am not buying it,” the commander was quoted as saying by Reuters.

The story suggests that the people behind the accident may have been Russian private military contractors fighting on the side of Khalifa Hifter, commander of the Libyan National Army.

Reports on the presence of Russian mercenaries in Libya are nothing new. Nor is speculation that they back up Hifter’s forces. Moreover, on Nov. 1, Malta seized two 2,000-cubic-foot containers of Libyan currency printed by the Russian state printer, Goznak — the delivery most likely intended for Hifter forces. All this shapes the view that Russia has thrown its weight behind the strongman as its main asset in Libya, although Russian officials deny this.

Russia’s “power vertical” decision-making and some policy patterns drawn in Syria further reinforce the view that all of Russia’s Libya actions, including the deployment of mercenaries, are dictated by the Kremlin. Indeed, when it considered that the chief of Wagner PMC, Evgeniy Prigozhin, is a close associate of President Vladimir Putin, speculation that the operation of Wagner mercenaries in Libya is carried out with Putin’s knowledge or consent sounds plausible.

In reality, Russia’s Libya policy has become a mix bag of state interests, Moscow’s pursuit for an improvement in its global status in confrontation with the West and the profit motive of certain Russian groups.

A year ago, Al-Monitor examined three theories about the drivers behind Russia’s Libya policies. First, the Foreign Ministry and Defense Ministry may be showcasing a classic interagency rivalry, each with a stake in a different party — Government of National Accord Prime Minister Fayez al-Sarraj by the Foreign Ministry, and Hifter by the Defense Ministry. Second, Russia may just be diversifying its toolbox, channels of contacts and hedging the potential risks of placing all its eggs in one basket. Therefore, different state and non-state agencies engaging with different actors on the ground makes perfect sense. The degree of such engagement, however, varies rather significantly, which paves the way for a third theory — that Moscow indeed has made its decision in favor of Hifter, as many in the West presume, and the outreach to Sarraj's people is just a facade of multilateralism to have Russia in the game as an objective mediator. All of the three theories have some relevance and are not necessarily mutually exclusive.

The third theory, however, seems in conflict with an unspoken principle of Russian policy in the Middle East: Russia generally avoids siding with one party until it is certain that that party will become a sole power owner. Yet in case of Libya, there are some powerful interest groups and personalities who lobby the Kremlin against Sarraj and for support of Hifter and there are those who lobby otherwise.

“For some reason no questions are asked when NATO countries’ servicemen, who had never been invited, officially appear all over the world (if we speak about the Mediterranean, take Syria, for instance). They seem to be present there as a fact and have the right to be there. But as soon as something occurs somewhere, some Bellingcat and other NGOs will plant materials about Russia doing something wrong somewhere again,” Russian Foreign Minister Sergey Lavrov said Dec. 6 at the 5th international conference “Rome MED 2019 — Mediterranean Dialogues.”

“There is no secret — there are knowledgeable people here – everybody knows who is really backing the warring parties in Libya. Let us not forget about it. It is better to stick to business rather than chase sensations,” he added.

The Foreign Ministry, which is on the public front line of Russian policy, operates in Libya on the premise that there is a need to raise Russia’s regional profile as a peacemaker, to ensure the return of Russian investments in the oil sector lost during the fall of Libyan leader Moammar Gadhafi and to expose the West’s inability to play a constructive role in any crisis its politicians fomented. The Foreign Ministry may also expect other Russian non-state actors to act to achieve these same objectives but may be detached from the blueprint these groups are promoting and whom they are working for.

What should be noted, however, is that all of this is happening amid incredible uncertainty over the ultimate endgame in Libya. Hence everything Russia is doing — officially and not semi-clandestinely — bears a large component of experimentation. Once Moscow discerns contours of a clearer future for the country and its own role there, the “multi-agency” aspect of Russia’s Libya policy will most likely be harnessed to Russia’s national goals.

The Libya situation is "due to Western erratic regime change policies and subsequent diplomatic impotence, not because of Russia. This is the bottom line; attempts to prove otherwise are blunt anti-Russian propaganda,” a senior Kremlin official, speaking not for attribution, told Al-Monitor.

“There are a dozen mercenary units operating on both sides [Sarraj and Hifter] from other countries — we all know who they are — there are nations with much bigger political and economic stakes in Libya than Russia and they’ve all been involved long before Russia stepped in. Yet mainstream political discourse promotes the distorted view that it’s Russia who violates Libya’s sovereignty, UN arms embargo and [is] doing all the barbarities. In fact, if we wanted to win the war for one party we’d have done so in a more decisive and skillful manner,” the official said.

The statements reflect not only the indignation that Moscow obviously feels about recent reports, but point to that Russia itself is both concerned about the actions of other stakeholders in the Libyan crisis and is focused on issues Moscow feels represent the “real agenda.”

For instance, following the signing of memorandums on the delimitation of maritime zones and security cooperation by Turkish President Recep Tayyip Erdogan and Sarraj in Istanbul on Nov. 27, Russian Foreign Ministry spokeswoman Maria Zakharova said they “gave rise to allegations of Turkey's attempts to legalize its military support for the government in Tripoli ... including by way of a blatant violation of the arms embargo.”

“This raises many questions directly for Mr. Sarraj. We hope that the parties to the above memorandums will show political prudence and refrain from steps that could further aggravate the already tense situation in Libya and the Mediterranean in general,” she concluded.

The statement triggered speculation in Russian expert circles about whether Libya could become a point of serious conflict between Russian and Turkish interests should the current trends develop.

In turn, discussing Russia’s long-term vision for the settlement of the conflict, Lavrov suggested that the coming Berlin conference on Libya needs to build on the experience of two other conferences — in Paris and in Palermo — and the agreements reached between Sarraj and Hifter in February.

“As you know, they envision a reform of the Presidential Council, a formation of a new government of national accord, an agreement on oil revenues, and drafting a new constitution. Without an understanding on such key issues it is very hard to expect that convening in a certain place — Berlin, Palermo, wherever — will be enough for the crisis to begin to resolve itself,” Lavrov said.