Russia sends its own signals on Libya by hosting Hifter

Russia's military embraces Khalifa Hifter ahead of intra-Libyan talks in Palermo that kick off today, but does it signal a shift in Moscow's attitude toward the Libyan crisis? 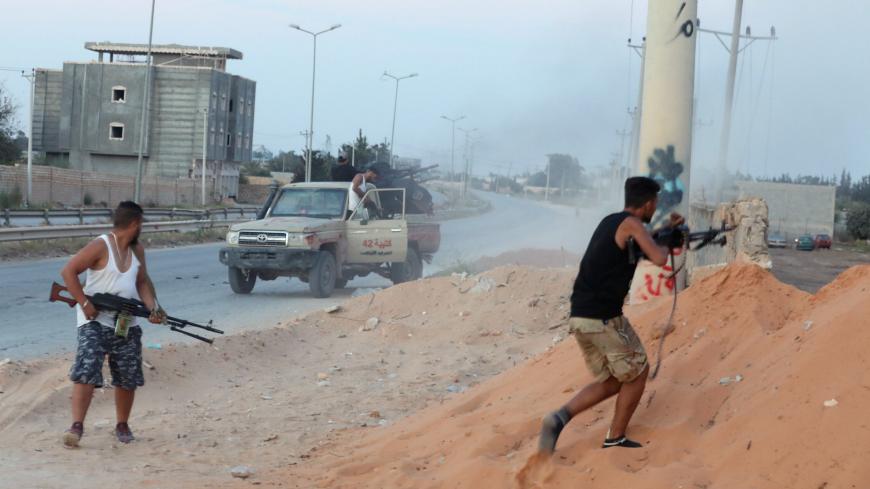 On  Nov. 7, the chief commander of the so-called Libyan National Army (LNA), Khalifa Hifter, who also represents the government in Tobruk, visited Moscow for a meeting with Russian Defense Minister Sergei Shoigu. The two discussed the present situation in Libya, the fight against terrorism and broader security in the Middle East and North Africa. Hifter also met with Valery Gerasimov, head of the general staff of the Russian army. This may indicate Moscow and Tobruk have either concluded certain agreements in the field of military cooperation or are discussing them.

On an even more intriguing note, Evgeniy Progozhin — dubbed “Putin’s cook,” and notorious for his alleged ownership of the Wagner private military contractor — was also present at the negotiations. Moscow later explained his presence by saying he was responsible for “the catering of the meeting” but this nonetheless led to speculation over a possible deployment of Russian mercenaries in Libya.

Hifter has visited Russia on a number of occasions. However, this particular trip became a sensation due to its timing — it took place in the run-up to the international conference on the Libyan conflict to be held Nov. 12-13 in Palermo, Italy. This summit will be the next significant step in the resolution process after the agreements concluded in December 2015 in Skhirat, Morocco, and in May 2018 in Paris. While Putin said Russia would send its “highest-level representatives” to the Palermo conference, his press secretary later said Putin himself would not attend.

Hifter had planned the visit as an opportunity to persuade Moscow to voice a more supportive position during the summit in Palermo. Another objective is to demonstrate that the LNA is Russia’s main ally in Libya — the commander’s old trick used to disrupt the relations between Moscow and the Government of National Accord in Tripoli led by Fayez al-Sarraj, which have recently seen major positive developments and regular contacts with a constructive agenda. However, Tripoli is quite sensitive to Hifter’s meetings with the Russian side, presuming they are likely to reach agreements behind the government’s back. Hence, now, just before a significant event, Hifter’s trip may urge Tripoli to revise a number of negotiating positions that were supposed to meet Russia’s support, considering the critical lack of time left.

On the other hand, it is clear that this visit could not have taken place if Russia itself had not been ready to meet Hifter’s demands. Moreover, while the visit by the LNA commander to Italy on Oct. 29 can be seen as Rome’s own measure to maintain the balance in the relations with both sides of Libyan conflict (as Fayez al-Sarraj had met Italian leaders four days earlier), Hifter’s talks with the Russian side were not compensated by any contacts with the Government of National Accord. This leads to a conclusion that Russia may have decided to make its bet on the LNA at the last moment before the conference.

It should also be noted that the absence of Russian diplomats or presidential administration officials at the meeting with Hifter did not indicate that the talks were insignificant or exclusively demonstrative. Recently, the role of the Russian Defense Ministry in foreign policy has been increasing quite substantially, especially on issues involving so-called crisis regions such as Syria. Libya has become the field of responsibility of Defense Ministry officials who establish contacts with the Tobruk administration and the LNA, while relationships with the Government of National Accord in Tripoli are forged, in part, by people associated with Chechen leader Ramzan Kadyrov.

Al-Monitor previously wrote about the backlash produced by speculative reports in the British media about Russian deployment of mercenaries and the S-300 and Kalibr missile systems. However, these reports make more sense if perceived not as reporting but rather as a reflection of the intentions Moscow and Tobruk might have.

The establishment of Russian military bases in Libya is actually an issue on the agenda. In the past, Russian military officers visited Tobruk and Benghazi, viewing these cities as potential locations for naval bases. It is possible that the launch of Russian facilities will depend on the role the commander of the LNA will take on as a result of the peace process. Some agreements on the supply of Russian weapons to the LNA may also exist; however, to implement them, UN sanctions on Libya should be lifted first. Hence, certain quarters of the Russian elite are interested both in achieving reconciliation in Libya as soon as possible and in ensuring that Hifter or his associates get leading offices in the new administration.

Another element indicating Moscow’s possible shift toward Hifter is the change in the United Arab Emirates’ view of the Syrian problem. It should be noted that Abu Dhabi is the main ally and sponsor of the LNA and the government in Tobruk. At the same time, recently the UAE has become much more sympathetic to Assad’s regime. It cannot be ruled out that the UAE will not only restore diplomatic relations with Syria, but also will be ready to provide Damascus with financial aid, for instance, within the framework of the repatriation project for refugees staying in Lebanon and Jordan.

Against this background Moscow could have met the UAE’s requests on a Libyan resolution; Abu Dhabi wants Russia to become more supportive of Hifter in exchange for the positive shift in its stance toward the Syrian government.

The Government of National Accord, in turn, seeks to build up an effective system of foreign backup for various actions, including military ones. On Nov. 6, Turkish Defense Minister Hulusi Akar and General Staff chief Yasar Guler met the leaders of the Tripoli government to discuss military partnership and the issues of regional security while Libyan Presidential Council Chairman Fayez Sarraj made his own trip to Istanbul to meet President Recep Tayyip Erdogan.

It is quite possible, however, that Hifter’s trip to Moscow was organized exclusively as an initiative of the Russian Defense Ministry, which lobbies the LNA or Hifter personally; hence, it would not fully reflect Russia's official position on a Libyan resolution. It should be also taken into consideration that the other group of Russian stakeholders that is led by Ramzan Kadyrov is backing Tripoli and still maintains high status and resources sufficient to influence the Kremlin in order to avoid an excessive shift toward Hifter in Russian policy in Libya.