Will Turkey remain involved in Libya?

Although some perceive Turkey’s walking out of the Palermo conference as stepping back from the Libya process, it doesn’t mean that Turkey is giving up its struggle for influence. 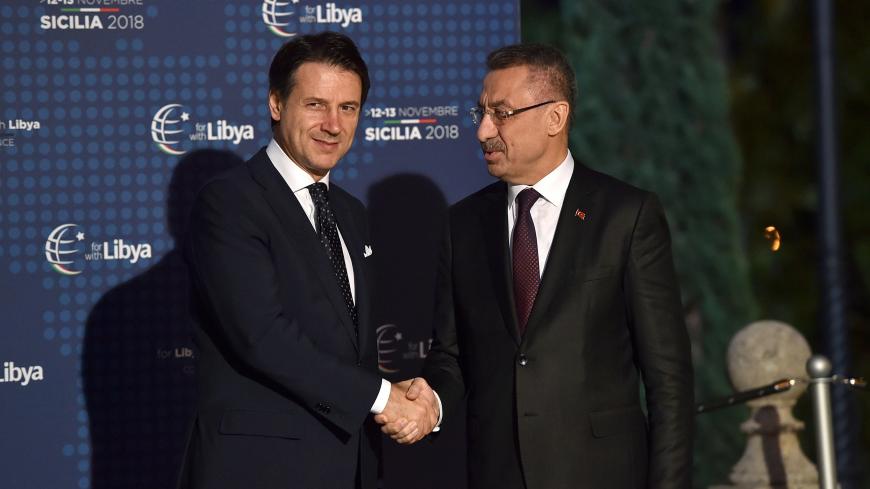 The struggle of international actors for influence in Libya continues to hamper moves to end the divisions in the country. Libya is still a scene for competition between Italy and France on the one hand and between the Turkey-Qatar-Sudan and Egypt-Saudi Arabia-UAE blocs on the other. The Egypt-Saudi-UAE bloc supports the Tobruk-based House of Representatives and military strongman Khalifa Hifter, the Libyan National Army commander who opposes the Tripoli-based Government of National Accord. Hifter, also supported by France, doesn’t conceal his enmity for Qatar and Turkey, countries he accuses of financing the Islamists. Russia, which enabled international intervention in 2011 but now regrets that decision, wants to find itself a place in Libya and is also supporting Hifter.

Turkey, which maintains silence when it comes to French and Italian initiatives that backed the efforts of UN envoy to Libya Ghassan Salame, was aiming at finding a place for itself at the Palermo conference held in Sicily.

The Libya conference convened under the slogan of “With Libya for Libya.” Hifter first announced that he would boycott the conference to avoid sitting at the same table with Turkey, Qatar and other Islamist rivals, but then surprisingly showed up in Palermo the night of Nov. 12 to attend a limited attendance meeting with Fayez al-Serraj, the leader of the Libya Presidency Council and prime minister of the Government of National Accord. Turkey and Qatar were excluded from the unofficial gathering, which was attended by Italian Prime Minister Giuseppe Conte, Egyptian President Abdel Fattah al-Sisi, Tunisian President Beji Caid Essebsi, Russian Prime Minister Dmitry Medvedev, Algerian Prime Minister Ahmed Ouyahia, French Foreign Minister Jean-Yves Le Drian, European Council President Donald Tusk and Salame.

The veto against Turkey's and Qatar’s participation may also be interpreted as maneuvering by Sisi, who persuaded Hifter to come to Palermo.

Reacting to its exclusion, Turkey withdrew from the conference.

“A very wrong and damaging attitude. Turkey is leaving the conference with deep disappointment. Any meeting that excludes Turkey will have a negative effect on finding a solution,” said Turkey’s Vice President Fuat Oktay, who led the Turkish delegation.

Ankara interpreted the unofficial meeting on the sideline of the conference as a move to legitimize Hifter’s position. The meeting further excluded Turkey from the Libyan process at a time when Ankara had already lost most of its influence over the past couple of years.

The roles of Qatar and Turkey first became controversial when Libya was divided between two parliaments, two governments and numerous armed groups. Islamist groups, including the Muslim Brotherhood, refused to recognize the House of Representatives.

Secular minded deputies under the tutelage of Hifter had moved the assembly to Tobruk to set up a new government. On the other hand, their rivals — supported by Turkey and Qatar — established the National Salvation Government as a continuation of the General National Congress based in Tripoli. But Tobruk-based forces, which could not control Tripoli, began accusing Turkey and Qatar of dividing Libya.

Within the framework of the Libya Political Accord that was decided on at an international conference held in Morocco’s seaside town of Skhirat in 2015, the Government of National Accord was established. The National Salvation Government was disbanded and the General National Congress was transformed into the High Council of State. But the divisions continued when the House of Representatives did not recognize the Government of National Accord approved by the United Nations.

Tobruk-based Prime Minister Abdullah al-Thinni in January 2015 accused Turkey of sending weapons to Islamist organizations. In January 2013, weapons loaded loaded from Turkey were found in a freighter that was caught in a storm and anchored on the Greek coast. In December 2014, weapons were found in a ship stopped by Egypt; Turkey was named the culprit. In August 2014, Hifter made news when he gave orders to hit a ship going to Derna, Libya, from Turkey. In November 2014, Greek officials discovered 20,000 AK-47 rifles in a ship that had sailed from Ukraine. In December 2014 weapons found on a Korean freighter that had come to the Libyan port of Misrata were said to have loaded from Turkey. Qatar and Turkey continued to be accused of sending weapons to Libya via Sudan. In September 2015, Libya seized a ship that had loaded on ammunition at Turkey’s Iskenderun port.

Turkey in general dismissed these claims as part of a propaganda campaign, but Ankara nevertheless lowered its profile because of the reports of weapons seizures. In addition, Turkey was busy with two elections, the 2016 coup attempt and the presidential referendum. Moreover, Turkey’s focus was on two military operations in Syria.

While Turkey lowered its profile, Salame in September 2017 produced an action plan that called for revision of the Government of National Accord to organize a national reconciliation conference, draft a new constitution, submit it to referendum and then organize national elections. Naturally this optimistic plan didn’t work out. In May 2018 France convened the parties in Paris. Serraj, Tobruk House of Representatives Chairman Aguila Saleh Issa, Tripoli-based High Council of State chairman Khalid el-Meshri and Hifter agreed to hold elections Dec. 10. But Italy said conditions were not ripe for elections and tried to dilute the French moves. Before Palermo, Salame had submitted a new plan to the UN Security Council to hold a national reconciliation conference in the first weeks of 2019 and then go to elections in the spring. The Palermo conference ended with approval of this road map.

Egypt is developing a plan to set up a national army under Hifter. This would involve moves to accommodate Qatar and Turkey, which have strong ties with forces in Tripoli and Misrata.

This is when Turkey launched new initiatives. Just before the Palermo conference, on Nov. 5-6, Turkish Defense Minister Hulusi Akar, chief of General Staff Yasar Guler and Isler held meetings in Tripoli that included Serraj, Meshri and Interior Minister Fathi Ali Bashaga. Meshri is among the leaders of the Justice and Reconstruction Party attached to the Muslim Brotherhood. Bashaga is linked to Misrata outfits that have a blood feud with Hifter. During the visit the parties discussed Turkey’s contribution to the formation of a Libyan army, including its training and unification of rival military forces. Visa exemptions also were discussed.

The emerging role of the Turkish military signals an effort to balance Cairo’s moves to set up a national army. The Egyptian newspaper Al-Ahram said Turkey has begun training militia forces by sending units of the Tripoli Revolutionaries Brigade to Turkey for advanced training.

On Nov. 9, Serraj, Government of National Accord Foreign Minister Mohamed Siala, central bank president Sadik el-Kabir and a deputy health minister went to Istanbul. The delegation was hosted by Erdogan. They discussed the agenda of the Palermo conference, reconstruction of the country and the return of Turkish contractors to Libya. Turkey partially agreed with a Libyan request for visa exemptions, abolishing visa requirements for Libyans younger than 12 and older than 65. To counter the busy Tripoli-Istanbul traffic, on Nov. 7 Hifter traveled to Moscow to seek Russian support and met with Russian Defense Minister Sergei Shoigu and Chief of Staff Gen. Valery Gerasimov.

Just as the competition was heating up, Turkey’s sudden withdrawal from Palermo appears to be a step backward. Will this affect Turkey’s decision to find a place in the Libya equation? Italy's efforts will not go beyond expressing support for the UN road map just as Turkey’s walkout will not change the course of events. Turkey’s position will actually be determined by the reconciliation attitudes of the Libyan parties. As long as the Egypt-Saudi-UAE bloc continues to rely on Hifter, the other side will continue with shuttles between Tripoli and Istanbul with no immediate likelihood of a settlement.