As a new election law fueled tensions between Libyan warring actors, Turkey might push for the postponement of the elections if the Libyan prime minister’s candidacy is rejected. 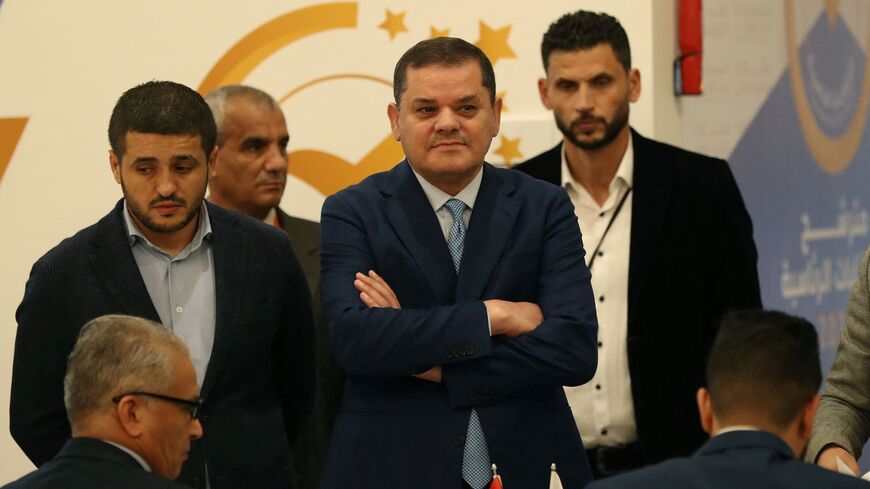 As controversy over the upcoming Libyan elections threatens to rekindle clashes between warring factions, the strategy Turkey will follow in the run-up to the vote will be of greater significance.

Hifter's and Gadhafi’s bids have outraged militia groups based in strongholds of his opponents including Tripoli, Misrata, and Zintan with militia leaders openly threatening to reignite the civil war. Turkish-backed political actors have also been disgruntled by the candidacy of Hifter, who has been called a “putschist” and “war criminal” by Ankara.

Prior to the two heavyweights’ jump into the presidential race, Turkish President Recep Tayyip Erdogan separately hosted Dbeibah and Khalid al-Mishri, head of the High Council of State, in Turkey in early November in a bid to plot an election strategy. While Ankara has been accused of endangering the election by keeping Turkish forces and Turkish-backed foreign militia in the country, it ostensibly supports the Libyan elections. Yet some of Erdogan’s allies now are pushing for postponement of the vote.

During his visit to Turkey in early November, Mishri, who is also a Muslim Brotherhood leader, lamented a new election law paving the way for Hifter and Gadhafi’s involvement in the race. Mishri said the law was passed by the country's Tobruk-based House of Representatives without coordination of the High Council of State and the Tripoli-based government.

Describing the bill as “illegal,” Mishri argued that Dbeibah could easily win the elections under fair rules. He also hinted that they would reject the election results should Hifter win.

“Turkey and Italy do not favor and do not support an erroneous election in Libya. Because they think that an election made with faulty laws will cause the country to be divided, dragged into a new war, and they support us in this regard,” he said  in Istanbul Nov. 13. He also criticized France, Egypt and the US’s positions on the election.

Speaking like Turkey’s lawyer, Mishri also backed the two critical aspects of Ankara's Libya policy. He said Turkey’s military presence is fully in line with international law and that Ankara was defending its rights in the eastern Mediterranean through a maritime deal it made with the Tripoli-based government.

Turkish-backed groups’ main problem with the new law is that lacks a provision to prevent Hifter or Gaddafi’s candidacy, while it contains a provision that prevents Dbeibah from running. Although Dbeibah registered himself as a candidate, it remains unclear whether his candidacy would be accepted by the High Election Committee.

According to a United Nations-mediated road map, the interim leaders including Dbeibah, pledged not to take part in the coming elections. Yet, the new law which was passed by the Tobruk-based House of Representatives on Sept. 8 left this condition out, paving the way for the Prime Minister’s candidacy.

Yet, the new law also stipulates that all public and military officials must resign from their office three month ahead of the elections. Both Saleh and Hifter had resigned from their posts in September, but Dbeibah has not. Opponents of the law argue that the bill needs to be amended to allow candidates to hold their positions until they officially submit their candidacy.

Ankara is shaping its position through two key questions: Which candidate can protect Turkey's military presence and the maritime demarcation deal and how can this candidate win? Two candidates stand out: Dbeibah and former Interior Minister Fathi Bashagha.

After the failure of Dbeibah's efforts to secure some advance support from the electoral committee, the former businessman formally submitted his candidacy on Nov. 21, a day before the deadline. Dbeibah supporters, who are now waiting for the committee's decision, might try to postpone the elections for three months if his bid is rejected.

Bashagha, who hails from Misrata — a stronghold of Turkish-backed groups — had also worked closely with Ankara to break the Hifter-led eastern forces’ siege of Tripoli last year. Bashagha sought Egypt and France’s support for his bid for premiership after the cease-fire, but lost to Dbeibah during the UN-sponsored vote on new interim authorities in February.

Bashagha, who registered himself as a presidential candidate on Nov. 17, is the second alternative whom Ankara might back. Some believe that the US also supports Bashagha, who travelled to Washington during the Tripoli siege and was able to change Washington’s position on the Libyan war by underlining the increasing influence of Russia in the country.

Gaddafi’s candidacy, meanwhile, might fit Ankara’s pragmatism as it could fracture Hifter’s votes. Although a Libyan court exonerated Gaddafi from embezzlement and murder charges in 2018, he is still wanted by the International Criminal Court for war crimes. Yet rejection of Hifter’s candidacy seems highly unlikely, as it would derail the elections in the east, possibly leading to a permanent division between country's east and west.

The US administration, which has openly opposed Gaddafi's candidacy, is keeping mum on Hifter’s presidential bid. A victory by Hifter, who had the support of Russia, France, Egypt and the United Arab Emirates during the civil war, could spell the end of Erdogan’s Libya calculations.

Thus militia groups' swift mobilization against Hifter's bid have fallen in line with Turkey's expectations. Militia affiliated with the country’s defense ministry attacked election centers in seven provinces and ousted election officials at gunpoint. A militia group called “Zawiyah Revolutionaries” issued a statement, saying they would never allow a presidential race which involves Hifter, threatening that his candidacy would reignite the war. Misrata-based leaders have also denounced the candidacy of “those who commit crimes against the Libyan people.”

If his candidacy is approved, Dbeibah is widely considered a frontrunner due to his populist policies, including aid programs for startups and newlywed couples. He has also promised cheap housing loans, free land, and double scholarships for university students.

According to al-Arab newspaper, Dbeibah, who is widely considered the best chance to beat Hifter and Gaddafi, is working in coordination with the High Council of State, militia leaders and other social groups. He has also secured the support of Misrata-based influential groups and political Islamists. Islamists, who do not run in the elections due to lack sufficient public support, are trying to sway the process in their favor behind the scenes.

Meanwhile, Egypt, which supported Hifter-led forces against Turkish-backed groups, avoids openly favoring a candidate. According to Egyptian commentator Mohamed Abul-Fadl, Cairo maintains good relationships with most candidates, including Dbeibah, despite his close ties with Turkey, and is avoiding an interventionist image when all bets are open.