Turkey hosted two rival Libyan premiers in Istanbul in bid to strike a conciliation between the clashing parties. 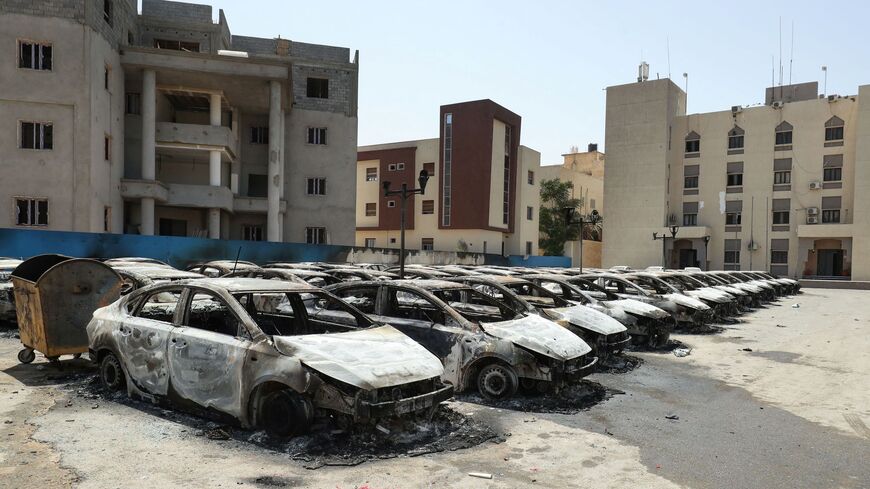 A picture shows a view of ruined cars following clashes between backers of rival governments in Libya's capital Tripoli, on Aug. 28, 2022. - MAHMUD TURKIA/AFP via Getty Images

A fresh round of deadly clashes has forced Turkey to step into fray and host high-level meetings with two rival Libyan leaders in a bid to de-escalate the tensions, Al-Monitor has learned.

On Sept. 1 in Istanbul, Turkish Foreign Minister Mevlut Cavusoglu, Defense Minister Hulusi Akar and spy chief Hakan Fidan met with two rival Libyan premiers — Fathi Bashagha, who was appointed as prime minister by the eastern-based parliament, and Abdul Hamid Dbeibah, the head of the Tripoli-based government. Well-placed sources speaking on condition of anonymity told Al-Monitor that the talks at the Turkish intelligence headquarters were held separately as the two men even avoided staying at the same hotel. Libyan Central Bank Governor Siddiq al Kabeer accompanied Dbeibah during the visit.

The meetings came after deadly clashes between the rival forces rattled Tripoli last week, leaving 32 people dead and more than 150 wounded. While Bashagha’s visit has gone unpublicized, a photo leaked to the Libyan press showing Cavusoglu, Akar, Fidan and Dbeibah together has prompted speculations that Ankara threw its support behind Dbeibah in the ongoing power struggle.

A Turkish source with close knowledge of the affair confirmed to Al-Monitor that Bashagha, who traveled to Istanbul from his stronghold in Sirte, left the meeting disgruntled.

In addition to Bashagha and Dbeibah, Aquila Saleh, head of the Tobruk-based House of Representatives, and Khalid al-Mishri, the head of the High State Council, have also been invited to Ankara, the sources added.

Following the failing efforts to hold general and presidential elections last December, Bashagha was appointed as the new prime minister by the country’s Tobruk-based parliament in March and formed his government in Sirte, but Dbeibah refused to cede power. Ankara, which has close ties with both men, has been trying to maintain an image of neutrality, pushing for a reconciliation in a bid to craft a road map to hold elections.

The tensions between the two rival camps have morphed into a fresh round of clashes after armed groups supporting Bashagha tried to move into Tripoli on Aug. 27. The 16-hour-long fighting ended after reports that forces loyal to Dbeibah had struck forces led by Usama Juwaili — a military commander supporting Bashagha — on their way to Tripoli by Turkish-made Bayraktar TB2 armed drones.

Whether Dbeibah-led forces used Bayraktar TB2s or not remains unclear. Commanders supporting Bashagha released photos of missile parts allegedly fired from TB2s without identifying where and when the pictures were taken. Juwaili initially denied the reports, yet journalist Samer Al-Atrush of the Financial Times later wrote Juwaili told him that Bayraktar TB2s were indeed used in the attack. Tripoli Grand Mufti Sadiq al-Ghariani, for his part, congratulated officials who used the drones.

“Whether Bayraktars were used or not remains in the dark. Yet, even murmurs that Bayraktars had been called in were enough to end the clashes,” a source based in Tripoli told Al-Monitor under the condition of anonymity. “This leak has reminded everyone of Turkey’s warnings that the security of Tripoli was its red line.”

The warning was most recently conveyed to rival Libyan military actors by Cemalettin Celik, deputy head of Turkey's National Intelligence Agency, who traveled to the war-torn country on Aug 18. Celik warned the parties that any attempt to enter Tripoli by force would be deemed a hostile action, calling on the rival parties to support the Tripoli-based government in a bid to hold parliamentary and presidential elections. According to Ankara, a military cooperation agreement that the now-defunct Government of National Accord (GNA) signed with Turkey in 2019 allows for Turkish military intervention in Libya for the defense of Tripoli.

According to Libyan sources, although the latest Turkish intervention has tipped the balance of power in favor of Dbeibah, Bashagha is unlikely to give in any time soon.

Ankara has grown aloof from Bashagha, who once had worked closely with Turkey while serving as interior minister in the GNA.

The tensions hark back to Bashagha’s tenure as the interior minister. Ankara’s annoyance with Bashagha’s perceived attitude as the “sole leader of the country” prompted Turkish President Recep Tayyip Erdogan to personally warn him, well placed sources told Al-Monitor. The Libyan leader’s following rapprochement with France and Egypt, which have supported eastern-based forces, further fed into Ankara's mistrust.

Although Turkey is allied with the Tripoli-based forces, Ankara has also begun fence-mending efforts with the Khalifa Hifter-led eastern-based forces in a bid to secure the future of the military cooperation and maritime delineation deals that it signed with GNA in 2019. Bashaga could have played a facilitating role between Ankara and easterners, yet this prospect dimmed after he openly confronted Dbeibah, siding with Hifter and Saleh.

As Turkey can hardly break the impasse by maintaining its appearance of neutrality, Ankara will have to choose its side. Bashagha’s chances seem slim, particularly after the clashes and an ensuing arrest warrant for him issued by the Dbeibah-led bloc.