Egypt pins hope on Prime Minister-designate Fathi Bashagha to secure the exit of all foreign forces from Libya and prepare for holding elections in the war-torn country. 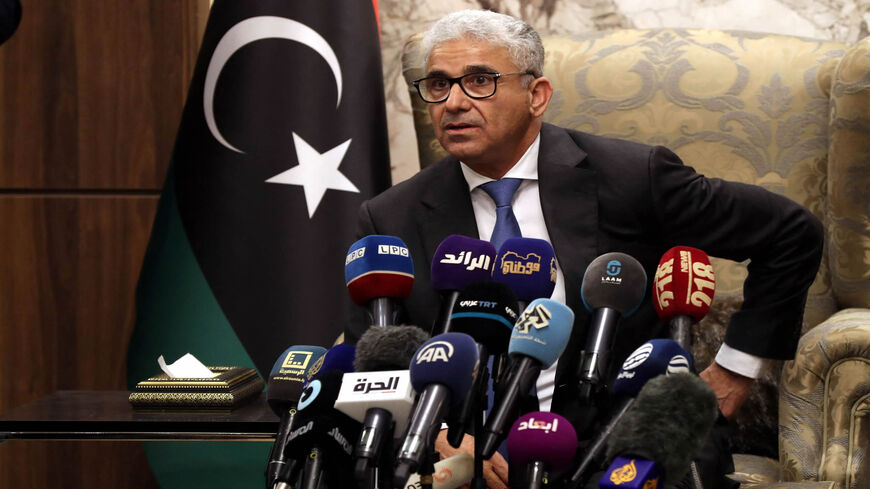 Egypt was quick to declare support Feb. 10 to former Interior Minister Fathi Bashagha to form a new government in Libya, hours after the Libyan parliament named him as the country’s new interim prime minister.

Bashagha was selected unopposed by the House of Representatives, based in eastern Libya, to replace incumbent Prime Minister Abdul Hamid Dbeibah after the only other candidate, former Interior Ministry official Khaled al-Bibass, had withdrawn.

The parliament’s move, however, was rejected by Dbeibah, who said he will not hand over power until a national election is held.

But just hours after Bashagha’s appointment, Egypt said in a statement issued by its Foreign Ministry that it values the move of the Libyan parliament.

The parliament is “an elected legislative body representing the Libyan people and is entrusted with enacting laws, granting legitimacy to the executive authority and overseeing it,” it said.

Egypt voiced confidence in the ability of the new Libyan government to secure the exit of all foreign forces from the country “in a manner that preserves Libya’s unity and sovereignty over its territory and achieves its security, in addition to controlling the internal situation to prepare for the upcoming elections.”

“Bashagha has a military background as he was a pilot. His background is more likely to win the support of former military officials in the country than Dbeibah,” Ragheb told Al-Monitor over the phone.

“His appointment will help unify the west and east in Libya, and unify the security institution given that Bashagha was an interior minister and was well aware of the security situation in Libya,” he added.

Bashagha is a well-known figure in Libya and to international actors. He was an interior minister in the former Government of National Accord (GNA), when Egypt-backed Libyan commander Khalifa Hifter launched a 14-month offensive on the capital Tripoli. The offensive, however, was repelled by the GNA forces, with Turkish military assistance.

His appointment as an interim prime minister has already won support from Hifter’s National Libyan Army.

“Egypt does not side with any party in Libya,” Ragheb said. “Cairo only wants to see all Libyan institutions united and see a real and practical settlement in the country, away from the open-ended interim periods.”

Dbeibah was installed last year as head of a government of national unity under a United Nations-sponsored road map to unify Libya’s divided institutions and oversee the run-up to elections on Dec. 24.

The vote, however, was not held over disagreements between Libyan rivals over the legal basis of the polls.

The Libyan parliament’s move to select Bashagha has left Libya with two prime ministers and raised fears of sparking a new power struggle in the war-ravaged nation.

Dbeibah has already described the parliament’s decision to replace him as “another attempt to enter Tripoli by force.”

But Khalid al-Mishri, head of the Tripoli-based High Council of State, which is equivalent to a senate, defended the decision of the parliament to name Bashagha as the new prime minister.

He said a text accompanying last year's confidence vote in Dbeibah’s government "stipulated that its mandate would end at the latest on Dec. 24, 2021."

Bashagha's designation replacing Dbeibah flowed from that text following a rare "consensus between parliament and the council," Mishri noted.

However, Mishri, whose council has been a rival to the House of Representatives, issued a statement Feb. 15 describing Bashagha’s appointment as “incorrect.”

“The issuance of a decision by the House of Representatives to designate a prime minister before holding a session of the High Council of State is an incorrect measure that doesn’t help build bridges of trust between the two bodies,” he said in a statement.

Jalel Harchaoui, a researcher specializing in Libyan affairs, opines that although Dbeibah has embodied a form of peace in Libya, his rule was seen as unsatisfactory by many Libyan factions.

“Cairo doesn’t see Dbeibah as an enemy per se, but it is of the opinion it can help install a much friendlier prime minister in Tripoli,” he told Al-Monitor.

Harchaoui said, “The Egyptians have good reasons to think that Bashagha will be more malleable and more amenable from their own perspective.”

Bashagha was on the same ticket with parliament Speaker Aguila Saleh, an ally of Egypt, during last year’s UN-backed vote to elect an interim prime minister.

“After the Saleh-Bashagha ticket lost a year ago, Bashagha got even closer to Saleh, Hifter, Egypt and France,” Harchaoui noted. “Egypt is eager to see Bashagha rule as prime minister. The idea is that, under Bashagha, Hifter’s coalition will be better funded, the Central Bank of Libya will let Tripoli award more contracts to Egyptian companies and bring more Egyptian workers to Libya.”

“The situation in Libya is very complicated and ambiguous,” he told Al-Monitor. “Both Bashagha and Dbeibah are from Misrata and both have their own militias.”

Hassan concluded, “In the past, there was a division between the east and west in Libya. Now there is a division in western Libya between supporters of Bashagha and Dbeibah.”