Moscow is throwing its support behind new Prime Minister Fathi Bashagha and its belief that he can "unite Libyan society." 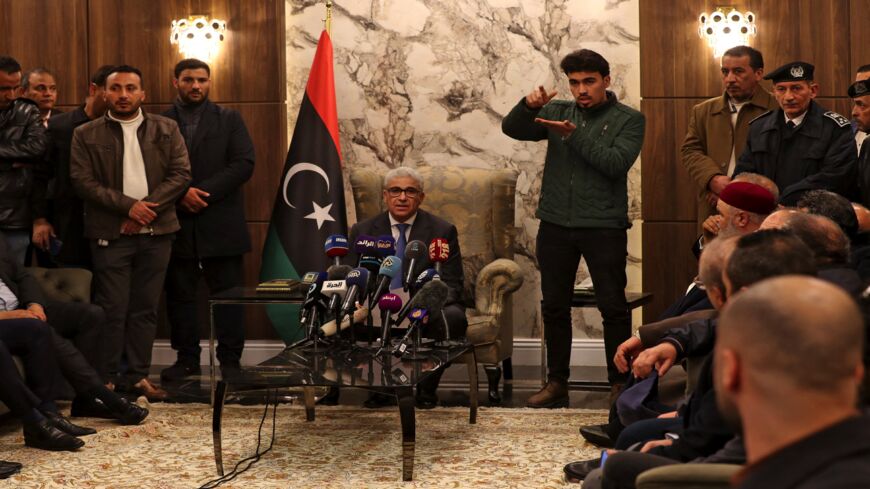 Russia was one of the first countries to express its support for Libya's new prime minister as divisions were reignited between the war-torn country’s rival governments.

Former Interior Minister Fathi Bashagha was appointed to the position by the country's east-based parliament, or House of Representatives, despite the fact that the UN-recognized government in Tripoli denounced the move. The latter’s premier, Abdulhamid Dbeibeh, is in no hurry to transfer his powers and hopes to keep his position until the government in Libya is formed following the presidential elections, which have been indefinitely postponed.

Russian Foreign Ministry spokeswoman Maria Zakharova commented Feb. 14 on the situation around the new Libyan government. In response to a reporter's request, she stated, “We are closely following the development of the internal political situation in Libya, where on Feb. 10, the [Tobruk-based] House of Representatives approved the well-known Libyan politician and former head of the Ministry of Internal Affairs in the former Government of National Accord of Libya, Fathi Bashagha, as the new prime minister of the country. He was instructed to submit proposals on the composition of his Cabinet to the parliament within 15 days. We presume that the election of their own government is the prerogative of the Libyans themselves. In this case, the majority of members of the Chamber of Deputies, a representative body created on the basis of a popular vote, voted for the candidacy of Bashagha.”

Zakharova emphasized that Moscow believes the “choice of the Libyan parliamentarians should be respected,” adding, “The most important thing is that the existing contradictions between the Libyans should not lead to a serious conflict but be resolved through negotiations and compromises.”

She expressed Russia’s hope that the new government under Bashagha would be able to unite Libyan society, “which will make it possible to successfully cope with the difficult tasks of the transition period, including preparations for holding national elections.”

On the whole, Russia’s position looks consistent. Military leader Khalifa Hifter, chairman of the House of Representatives Aguila Saleh and former Deputy Prime Minister Ahmed Maiteeq — who were previously considered Moscow’s favorites in Libya — all participated in the process of nominating and approving the candidacy of Bashagha as the new head of government.

On the one hand, relations between Russia and the Dbeibeh government were also quite fruitful. The two sides worked together on the implementation of economic projects in the field of oil production, the creation of permanent intergovernmental structures and even the establishment of contacts in the military sphere. On the other hand, Moscow tried to distance itself from Bashagha for a long time, avoiding any contact with him despite the fact that the former interior minister himself was looking for opportunities to establish ties.

The fact is that Bashagha, according to reports in Russian media, was responsible for the kidnapping and detention of Russian sociologists Maksim Shugalei and Samer Seifan, who spent many months in a prison controlled by Bashagha's armed groups. A feature film was even made about it, which was shown on federal Russian television channels, and Bashagha was presented in this film as one of the main villains.

Moscow's position on Bashagha began to change for the better at the end of 2021. Moscow understands that Bashagha in this case is a “team member” alongside Hifter and Saleh and is not an independent player. The same applies to Supreme Council of State Chairman Khaled al-Mishri and the Libyan Muslim Brotherhood, who also supported Bashagha’s appointment. That is, now the ex-head of the Ministry of Internal Affairs and the “Muslim Brotherhood” play for the team that Moscow initially betted on. Thus, at least with regard to Bashagha, Moscow’s previous reservations were removed.

If Moscow and Bashagha are truly ready to work together, this would be considered a great success for Russia on the Libyan track. Russia was able not only to maintain influence on its former favorites — Saleh and Hifter — but also ensured that the leading politicians of western Libya who have a power resource, such as Bashagha, are now ready to act in the interests of the Kremlin. This would mean Moscow’s influence in the country is more spread out, and thus threats to maintaining the Russian presence would diminish.

Jalel Harchaoui, a researcher specializing in Libya, told Al-Monitor, “In June 2020, Bashagha vowed Qardabiyah would cease to be a Russian facility,” in reference to the air base south of the Mediterranean coastal city of Sirte. “But now, as a result of the alliances he struck and the pledges he made in recent months, Bashagha is unlikely to challenge the Russian character of Qardabiyah, al-Khadim, al-Jufrah and other assets. That helps explain why Moscow strongly supports a Prime Minister Bashagha.”

The change in Moscow’s approach to Bashagha first became evident following statements by Russian businessman and owner of the Concord company Yevgeny Prigozhin regarding the situation in Libya. The EU and the United States claim Prigozhin is affiliated with the activities of Russian private military companies in Libya and included him on their sanctions lists, yet the businessman himself denies such accusations.

“The Libyan people want stability, and only strong figures can give stability. … Today, these strong figures are Aguila Saleh, Khalifa Hifter and Fathi Bashagha. One controls Libyan laws, the second controls most of the country, and the third is the only person from politicians in the west of Libya who can cope with the groups around Tripoli,” said Prigozhin. He also stated that he "takes off his hat" to Bashagha, considering him a true Libyan patriot.

In turn, the press service of the Concord company also published a response on behalf of the businessman in Pravda regarding the appointment of Bashagha as the new head of the government of Libya. “I have carefully studied this issue and I believe that the House of Representatives is the only legitimate body in Libya today. And this body decided that Fathi Bashagha would be the prime minister. No one has the right to challenge the legitimacy of his appointment. The Libyan executive power is obliged to accept the decision of the House of Representatives, to execute it quickly and accurately. As for the issue of legitimacy in Libya, the main illegitimate body that plays on the Libyan field today is UNSMIL in the person of Stephanie Williams,” Prigozhin said. UNSMIL is the acronym for the United Nations Support Mission in Libya, which supports the Government of National Unity (GNU) in Tripoli.

It’s notable that Moscow has voiced its support for Bashagha without including any negative comments about Dbeibeh. For Moscow, UNSMIL and its head, American diplomat Stephanie Williams, are considered responsible for the political crisis in the country. Williams’ support for the GNU’s Dbeibeh after the elections scheduled for Dec. 24, 2021, were canceled also reflects the point of view of Washington. Williams' visit to Moscow in January 2022 was accompanied by a massive Russian media campaign to discredit her activities.

Against the backdrop of the campaign, a visit to Russia by a GNU delegation led by Deputy Prime Minister Hussein Ghatrani set for Jan. 16 was postponed — first for three days, and then for an indefinite period. According to Libyan media outlets, these changes were initiated by Dbeibeh. At the same time, it cannot be ruled out that even then Moscow's position on supporting the formation of a new alternative government in Libya became known and Russia itself sent signals about the undesirability of negotiations with representatives of the GNU, whose future was being called into question.

However, it is too early to say if Moscow will completely withdraw its recognition of the Dbeibeh government. The main sources of the country's finances are concentrated in the hands of the head of the GNU — the leadership of the central bank still supports Dbeibeh. Also, many powerful factions of Misrata, Tripoli, Zawiya and other regions are ready to come out on his side. Therefore, most likely, Russia will take a wait-and-see approach and leave open a window of opportunity to return to dialogue with the Dbeibeh government if the project to create a Bashagha government ends in failure and the new government is just an “alternative.” In such a scenario, Moscow, following its previous experience, will likely continue to work with all the forces operating in the country that have power and influence and are ready to take into account Russian interests.