A major political settlement in Libya has recently been agreed to after lengthy complicated negotiations. But unless the outcome is viewed as a win-win game, it could end up being just another round of empty talks. 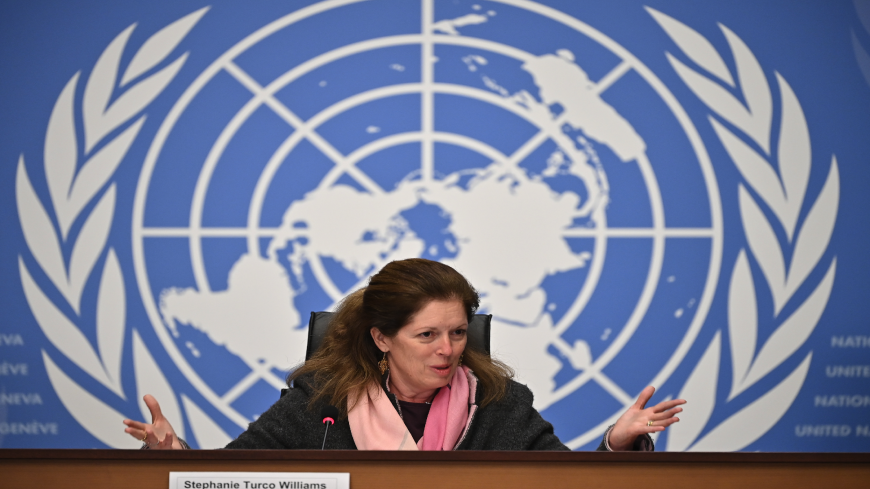 Deputy Special Representative of the UN Secretary-General for Political Affairs in Libya Stephanie Williams gestures as she speaks during a press conference in Geneva on Feb. 5, 2021, following the election of a new interim government for Libya during the Libyan Political Dialogue Forum. Libyan delegates at UN-led talks outside Geneva made the surprise choice of Abdul Hamid Dbeibah as prime minister of a transitional unity government to take the war-ravaged country through to elections in December. - FABRICE COFFRINI/AFP via Getty Images

Libya finally has a prime minister and Presidential Council. Whether this will bring unity and peace to the divided, war-torn country is another matter.

Credit for this positive development goes to Stephanie Williams, acting United Nations envoy and head of its Support Mission in Libya (UNSMIL).

During the marathon session in Geneva, Switzerland, on Feb. 5, the Libyan Political Dialogue Forum (LPDF) voted 39 to 34 to appoint Abdul Hamid Dbeibah, a businessman turned politician, to be prime minister while appointing little-known diplomat Mohamed Younis Menfi as head of the three-member Presidential Council, replacing the outgoing, dysfunctional nine-member council headed by Fayez al-Sarraj, who has been at the helm since 2015.

Dbeibah has three weeks to form his government before submitting it to the Tobruk-based parliament for approval. The Presidential Council, on the other hand, has fewer executive powers, and Menfi is likely to act as a ceremonial head of state in the interim period that should end, if all goes according to plan, with national elections envisioned for Dec. 24.

Dbeibah now has two main tasks: On the one hand, he will have to prepare for and organize general parliamentary and presidential elections. On the other hand, he must unify the country’s divided institutions.

Since the war began in August 2014, Libya has had two competing governments: the Government of National Accord (GNA) based in Tripoli and recognized by the UN as the only legitimate government, and the Libyan government based in al-Bayda in the east, but unrecognized by other countries. Consequently, all government institutions in Tripoli have their counterparts in al-Bayda, including the Central Bank, the National Auditing Bureau, the army, police and ministries.

The conflict in Libya, which erupted after late leader Moammar Gadhafi’s government was toppled in October 2011 with NATO help, has been difficult to settle thanks to foreign inference and quarreling domestic politicians.

However, since October 2020, UNSMIL has been leading incrementally successful rounds of negotiations. It started with the cease-fire across Libya that was signed on Oct. 23 in Geneva by a 10-member military commission, equally representing the GNA and its rival, the Libyan National Army (LNA) commanded by Khalifa Hifter.

Williams has been successfully building on that breakthrough by pushing for political dialogue and creating the LPDF back in October, before launching negotiations in November.

If successful, the current executive setup is a win-win for Libya and its people after 10 years of perpetual war, chaos and division — but not everybody is happy.

Some local politicians, political parties and their foreign power backers see this development as a zero-sum game in which there are winners and losers.

This being said, the biggest winners and losers in Libya are not solemnly locals, but reach beyond the North African country.

Foreign losers include Turkey, a long-time strong supporter of the GNA, supplying it with mercenary fighters, army trainers and weapons, and launching hundreds of drone strikes against LNA forces throughout 2019 up to June 2020. At one point, the LNA’s codenamed “Decisive Battle” offensive was a few kilometers away from the center of Tripoli. But thanks to Turkish support, they were repelled by the GNA.

Speaking to Al-Monitor on condition of anonymity for security reasons, an LPDF member said, “Turkey has always been a serious problem.” According to him, if Ankara is unhappy with the new executive setup, it could have the GNA and its supporting militias withdraw from the agreement, destroying it altogether.

However, Turkish President Recep Tayyip Erdogan welcomed in a phone call to the new leaders on Feb. 7 the development, promising help for a “democratic and peaceful” Libya.

According to the source, to ease Turkey’s worries about the new executive, the roadmap — adopted by the 75 delegates of the LPDF — bans any changes to Libya’s foreign relations without naming any country. The roadmap’s Paragraph 10 of Article 6 says “the executive authority shall not consider any new or previous agreements” that could harm Libya’s foreign relations — implicitly referring to Turkey since it is the only country that has signed a controversial, long-term agreement with the GNA.

On Nov. 23, 2019, Ankara signed a sea boundary demarcation agreement with the GNA despite objections from Egypt, France and the European Union among others. In reaction to the agreement, Greece went as far as expelling the GNA’s ambassador to Athens, Menfi, who is now the new head of the Presidential Council.

That particular agreement is vital for Turkey’s strategy in the Eastern Mediterranean. Having Libya, a country with a long Mediterranean coastline, recognize Turkey’s claims is crucial. Ankara would reject any new executive authority in Libya if it sensed such a new government might annul its security memorandum and maritime deals that were previously signed with the GNA.

Based on its own calculations, Egypt, which backs the LNA, perceives that the new government in Tripoli will not be as hostile as its predecessor was to Cairo. This belief has been emphasized by Menfi’s visit to Benghazi on Feb. 11 and his meeting with Hifter, Cairo’s ally.

Cairo has recently been reaching out to Tripoli. On Dec. 28, 2020, an Egyptian consular and security delegation held talks with GNA officials aimed at normalizing ties and reopening Egypt’s embassy in Tripoli, which has been closed since 2014.

Indeed, some in Cairo — particularly top Foreign Ministry officials who lately supported Aguila Saleh, speaker of the Tobruk-based parliament, alienating Hifter in the process — might feel at a loss since Saleh lost his bid for the Presidential Council presidency. However, Menfi appears reconciliatory toward both Saleh and Hifter, winning Cairo’s sympathy too.

A former Egyptian diplomat in Libya who did not want to be identified told Al-Monitor, “Any new executive [authority] in Libya will be welcomed by Egypt. Both sides are better together than apart.” The diplomat added, “Egypt, if not a winner … is certainly not a loser in new Libya.”

But Russia, the United Arab Emirates and France, having aligned themselves with Hifter, are obvious winners at the expense of Cairo. Hifter will become closer to Moscow and Abu Dhabi than Cairo. But he will not bypass it in any major moves he might be contemplating. He will always need Cairo’s “support given its proximity to eastern Libya where he is in control,” the Egyptian diplomat concluded.

Once the voting ended, Abdalla Othmane, a prominent LPDF member and university professor, warned the new executive body against relying on an international legitimacy instead of a domestic one.

Othmane is referring to the fact that the 75-member forum was not elected but was handpicked by UNSMIL and Williams, making it similar to the outgoing Presidential Council headed by Sarraj, which never got the vote of confidence by parliament as required by the Libyan Political Agreement of 2015. In fact, it ended up in power only because of the UN Security Council endorsement manifested in Resolution 2259, which recognized it (the Presidential Council) as the only legitimate government. But its political and legal legitimacy inside Libya was and still is questioned.

When it comes to domestic losers, there are a few. But they hardly represent any serious obstacles. The array of militias in western Libya in general, and Tripoli in particular, have generally welcomed the new executive body, not necessarily out of love but just because their No. 1 enemy, outgoing Minister of Interior Fathi Bashaga, lost his bid for prime minister. They also are not hostile to Menfi, who has no record of being anti-militia.

Hailing from eastern Libya, Menfi is seen in Tripoli as a GNA loyalist and as being “militia-friendly,” according to Aboubaker Agnona, who is closely associated with the Tripoli Brigade, one of the top militias in Tripoli. Unlike outgoing Bashaga, Menfi has never been openly hostile to armed groups in the capital and has never been on the record supporting the LNA, considered to be first and foremost an enemy to the armed groups in western Libya.

The biggest winner so far could turn out to be the Libyan Muslim Brotherhood that's well-rooted in western Libya, particularly in Misrata, Dbeibah’s hometown.

The Muslim Brotherhood is the most sophisticated and shrewd political organization in the country, with a special talent for deal-making. Realizing they might lose the final stage of elections in Geneva, they withdrew their top nominee, chairman of the High Council of State Khaled al-Mishri. By doing so, they stayed amiable to all others. This will help their jockeying for influence in the formation of a new government, especially with Dbeibah hailing from Misrata, the Brotherhood’s stronghold in Libya. Also, different local actors would now consider the Muslim Brotherhood as “nice guys trying to help Libya,” Agnona said.

Unless both foreign powers and their domestic proxies view the LPDF’s outcome as a win-win situation, little is expected from the new interim executive authority, under pressure even before it takes office, by the looming Dec. 24 elections deadline.