Amid accusations that the self-styled Libyan National Army led by eastern military commander Khalifa Hifter is redeploying in Sirte, Egypt continues to show its support for the Libyan leader as the country moves toward a transitional phase and national elections scheduled for later this year. 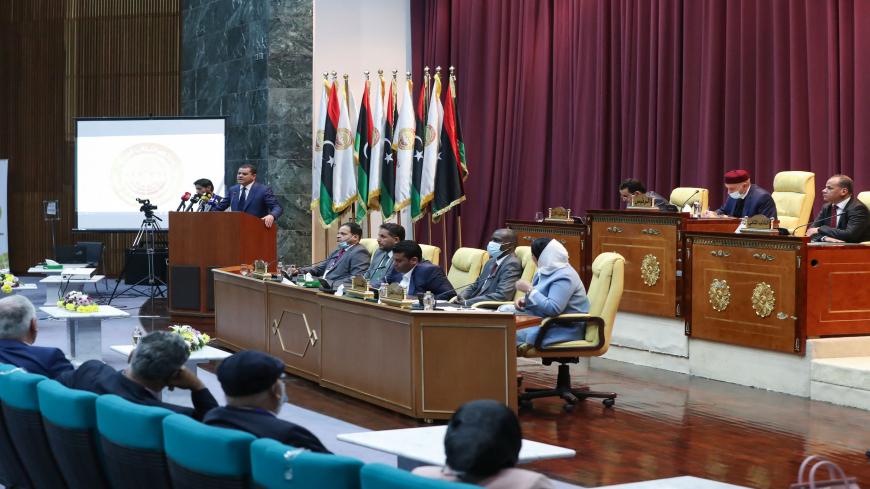 CAIRO — The head of the new Libyan Government of National Unity, Abdul Hamid Dbeibah, discussed March 16 with the Joint Military Commission, known as 5+5, ways to unify the Libyan military establishment under a single entity, expel mercenaries from Libya and open the coastal road, linking Libya’s east and west.

The meeting came on the heels of a March 12 statement by the Sirte-Jufra Liberation Operations Room, affiliated with the Government of National Accord (GNA) forces in western Libya, during which it announced that it had monitored the military movements of the rival Libyan National Army (LNA) forces, led by Egyptian-backed strongman Khalifa Hifter, in the city of Sirte.

Brig. Gen. Al-Hadi Dara, spokesman for the Sirte-Jufra Liberation Operations Room, said that his forces had spotted 12 buses carrying LNA forces and that they arrived at al-Qardabiya air base in Sirte.

Dbeibah was chosen as interim prime minister at United Nations-led talks by the Libyan Political Dialogue Forum in February. The forum, launched in November, is the UN's latest bid to end the nearly decade-long conflict in the country. While Egypt’s support for the UN-backed political process last fall was instrumental in its success and will continue to be, Cairo still maintains its close connections with Hifter due to security concerns and its interest in Libya.

GNA-affiliated Operation Volcano of Rage published a video March 6, showing a tanker carrying military vehicles and armored vehicles heading from the Egyptian border governorate of Mersa Matruh to the Libyan city of Tobruk, coming from Egypt in support of Hifter.

A report published March 10 by the Geopolitical Intelligence Services website stated that Hifter’s forces had dug a 70-kilometer (43-mile) trench between Sirte and Jufra, as well as rearming and repositioning themselves on the ground.

The LNA’s military fortifications in Sirte came in the wake of Mohamed al-Menfi’s list winning in the new executive authority elections in Libya on Feb. 5. His list was chosen by the participants in the Libyan political dialogue that was held in Geneva, at the expense of the list of Aguila Saleh, a close ally of Egypt. After his list won, Menfi, who is close to the GNA, became the head of the Presidential Council, the country’s highest executive authority.

Cairo attaches great importance to Sirte, due to its strategic location, in the center of Libya. The city is considered the dividing line between the east where the Hifter-led LNA forces, supported by Egypt, are stationed, and the west where the Turkish-backed GNA forces are positioned.

On June 6, 2020, the GNA forces, with unprecedented Turkish support, announced their success in controlling the city of Tarhuna in western Libya, one of Hifter’s main strongholds, and the airport of the capital, Tripoli, as well as six other cities, stressing their readiness to enter and control Sirte and make their way through eastern Libya.

Egyptian President Abdel Fattah al-Sisi made statements on June 20, 2020, during his inspection of the Western Military Region, threatening direct military intervention in Libya if the GNA forces were to cross the Sirte-Jufra line. “Sirte-Jufra is a red line for Egypt and its national security, and any direct intervention on Egypt’s part in Libya would have international legitimacy if the GNA forces crossed this line and headed east,” Sisi said.

Maj. Gen. Gamal Mazloum, a military expert and adviser to the Nasser Military Academy affiliated with the Egyptian army, told Al-Monitor that these military moves around Sirte aim to protect the Libyan east from terrorists and armed militias infiltrating it in light of the massive proliferation of weapons and mercenaries supported by Turkey.

On Dec. 2, 2020, Acting Special Representative of the Secretary-General for Libya Stephanie Williams revealed the presence of 20,000 foreign forces and mercenaries in Libya, which she considered a “terrible” violation of national sovereignty, noting that Libya has 10 military bases across the country that are operated by foreign forces.

The UN estimates indicate that there are around 29 million light, medium and heavy weapons in Libya, a number that has not been recorded in any other country during the past 40 years.

Mazloum said that Egypt has been supporting the LNA for several reasons, the first of which is securing its western borders from Turkish threats, for fear of armed militias causing chaos in the Libyan east, which will be reflected on the Egyptian national security.

As for the second reason, he explained that Egypt fears the failure of the transitional phase in Libya, and the violation of the cease-fire agreement between the conflicting parties, as the situation remains unstable.

Mazloum noted that Cairo is thus seeking to preserve its areas of influence in the east, especially since the mercenaries have not yet surrendered their weapons nor did the armed militias withdraw from the country, despite the end of the period specified by the cease-fire agreement concluded in Geneva last year.

On Oct. 23, 2020, Libya’s warring parties in the east and west signed a permanent cease-fire agreement at the UN headquarters in Geneva. The agreement provides for all mercenaries and foreign fighters leaving Libya’s land, sea and air space within a maximum period of three months from the date of signing — a deadline that is yet to be respected.

On March 15, Dbeibah was sworn in before the Tobruk-based parliament to lead the transitional phase until the elections are held.

Libya TV had published a report on Feb. 3, in which it said that Dbeibah was supported by Turkey and that the Dbeibah family had awarded nearly $19 billion in Libyan construction contracts to Turkish companies through state bodies controlled by the Dbeibah family.

As for the last reason behind Egypt's continued support for Hifter, Mazloum explained that Cairo supports armies in the face of militias; the Egyptian creed does not believe in armed groups or brigades, but rather gives credit to the importance of armies controlling security, so it seeks to support the LNA.

Meanwhile, Ali al-Saidi, a member of the Tobruk-based parliament, told Al-Monitor that Egypt is afraid of armed militias integrating the Libyan army, as the cease-fire agreement stipulated the establishment of a unified military force in the west and east.

Cairo is thus concerned this would lead to the LNA falling apart, Saidi noted.

Article 3 of the cease-fire agreement stipulates the formation of a military force from the east and west to stop the violations and control security.

Saidi added that the Libyans see Egypt as a protective bulwark against extremism and terrorism, noting that Cairo will continue to support the LNA until the situation is stable, the mercenaries withdraw and the transitional phase ends with the holding of the next elections, scheduled for December.