Abdul Hamid Dbeibah has vowed to unify the war-torn country and lambasted the presence of foreign mercenaries. 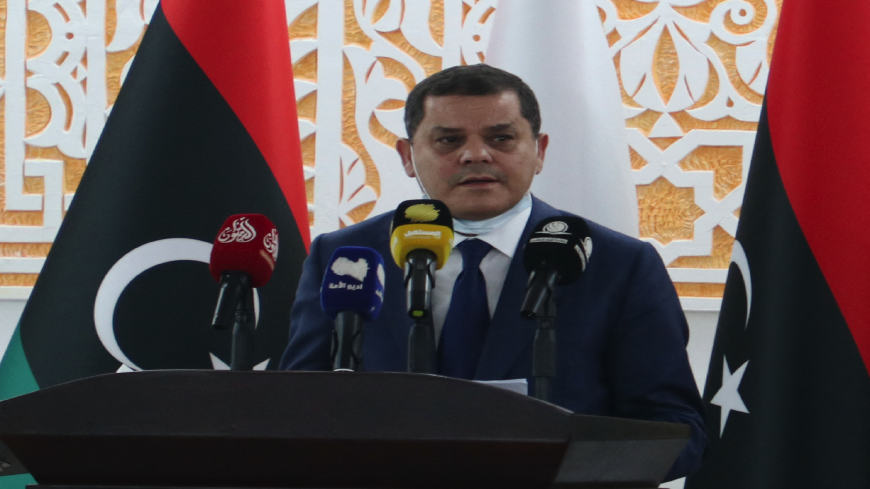 Libya's new interim prime minister, Abdul Hamid Dbeibah, speaks after being sworn in the eastern Libyan city of Tobruk on March 15, 2021, to lead the war-torn country's transition to elections in December, after years of chaos and division. - MOHAMMED EL SHAIKHY/AFP via Getty Images

Abdul Hamid Dbeibah, Libya’s new prime minister, was sworn in on Monday ahead of United Nations-sponsored elections set for December that aim to reunite the war-wracked country a decade after the overthrow of dictator Moammar Gadhafi.

Dbeibah, a prominent Mistratan businessman, was sworn in in Tobruk on Monday after having been selected as prime minister at UN-backed talks in February. His government was approved by a wide margin last month and will retain power until national elections on Dec. 24.

His administration is expected to supersede war-torn Libya’s two rival governments: the UN-backed administration in Tripoli, and the Tobruk-based House of Representatives, which is aligned with retired Libyan general Khalifa Hifter.

Dbeibah’s bid for head of the new government was briefly marred by bribery allegations reported on by the UN.

The outgoing prime minister of western Libya’s UN-backed government, Fayez al-Serraj, has fully endorsed Dbeibah’s premiership, saying he is ready to hand over authority. Meanwhile, Hifter offered the “support of the armed forces” for the international peace process, Agence France-Presse quoted him as saying.

After seizing control of most of Libya’s east and oil-rich south, Hifter launched a failed offensive against Tripoli in 2019. That gambit drew Turkey and Russia deeper into the conflict, with Ankara sending soldiers and Syrian mercenaries to back the UN-recognized Tripoli government, and Russia sending Wagner mercenaries and Syrians to back Hifter.

The stalling of Hifter’s offensive last year was seized upon by diplomats from the UN and United States, who sought to bridge the divide to halt further conflict and entrenchment of foreign military forces.

Dbeibah’s government will face significant hurdles in the coming months. Oil-rich Libya’s economy is in tatters after a decade of civil war. Though oil production has restarted since a blockade by Hifter last year, there is yet no firm agreement on how to share petroleum revenues between the two governments.

The former business magnate has vowed to combat corruption but has yet to offer a plan to meet the many daunting political and economic challenges the country faces.

His government also will have to reckon with the presence of some 20,000 foreign fighters in Libya. The foreign mercenaries could give Russia, the United Arab Emirates and rival Turkey competing leverage over Dbeibah’s attempts at reform.

A UN-backed deadline for all foreign troops to leave the country came and went in January.