The breakthrough follows concerns last month that the House of Representatives' vote of no confidence could be further thwart progress towards national reunification. 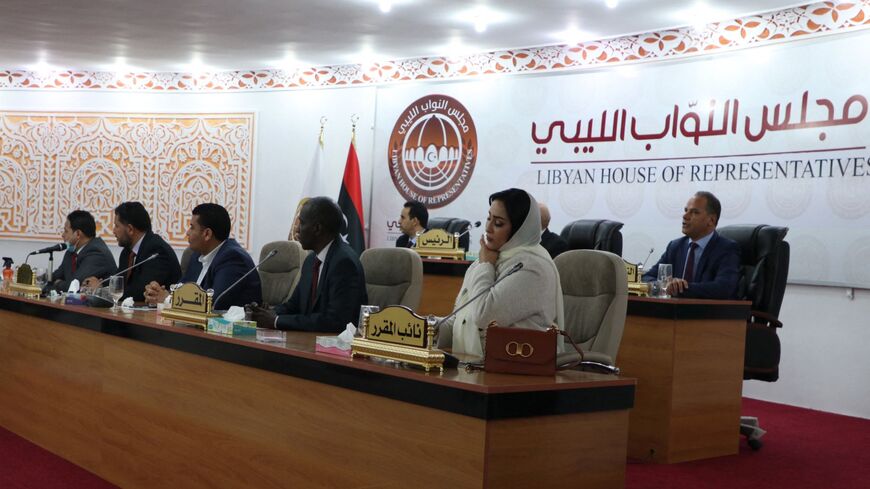 Members of Libya's parliament attend the swearing-in ceremony for the country's new interim prime minister in the eastern Libyan city of Tobruk on March 15, 2021, after years of chaos and division. - MOHAMMED EL SHAIKHY/AFP via Getty Images

Libya’s eastern-based parliament passed a new elections law on Monday, potentially bringing the country one step closer to reunification after a decade of intermittent civil war.

While the contents of the law have not been made public, it is expected to provide further legislative framework for the country’s planned nationwide parliamentary and presidential elections set for Dec. 24.

A spokesperson for the Tobruk-based House of Representatives announced the passing of the law on Twitter.

“With this, the parliament will have completed the necessary legislation to organize the presidential and parliamentary elections,” Abdullah Bliheg wrote.

Still, the country has major obstacles ahead. The country's transitional government is plowing ahead, despite a vote of no confidence last month from the Tobruk-based parliament.

Libya has been embroiled in civil war since a 2011 popular uprising backed by NATO toppled longtime dictator Moammar Gaddhafi.

The violence reignited in 2019, when former general Khalifa Hifter launched an offensive against Libya’s UN-recognized government, which is based in Tripoli.

Hifter’s offensive drew thousands of foreign fighters into the conflict, including Syrian fighters on both sides and Russia’s Wagner mercenaries in support of Hifter.

A United Nations-backed ceasefire backed by US diplomatic support led to a halt in hostilities last year after Hifter’s offensive stalled on the ground.

In March, an interim unity government was installed in accordance with the UN reconciliation process. But political wrangling and jockeying for positions are threatening to derail the process.

Western diplomats led by the US continue to press Libyan officials to stick to the elections timeline in hope the country can be reunified.

US officials are concerned that Russia’s military presence in Libya could further destabilize developing countries in the region and encroach on US strategic interests.

The US backs the UN’s call for foreign fighters to leave Libya, but US officials increasingly see the prospect as unlikely before Dec. 24.