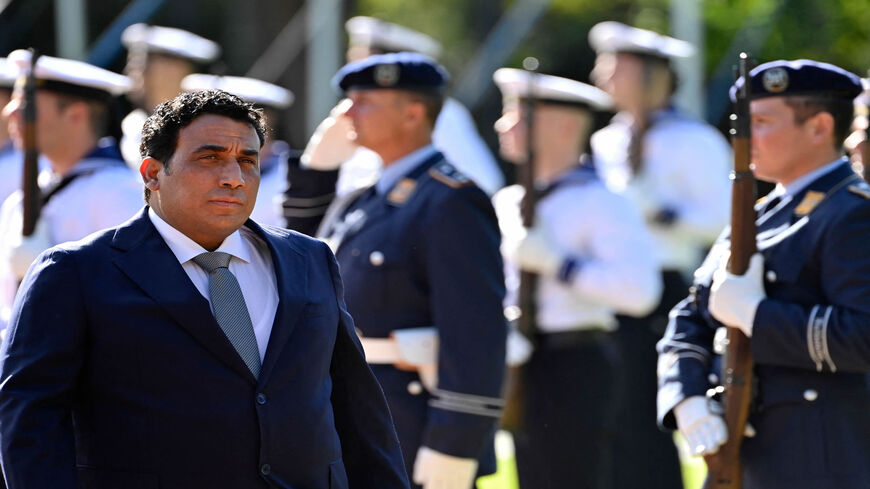 Libya's President Mohammad Younes Menfi (L) is pictured as he reviews a guard of honor during his meeting with German President Frank-Walter Steinmeier at the Bellevue presidential palace, Berlin, Germany, Oct. 1, 2021. - John MacdougallAFP via Getty Images

The top commander of US forces in Africa paid a surprise visit to Tripoli last week to sit down with officials from both sides of Libya’s conflict.

The pair also met with the country’s joint 5+5 military committee on Tuesday, marking the first time the representatives from the rival Libyan sides convened in the internationally recognized capital.

Townsend came to support Washington's message that Libyan officials stick to a timeline to hold national elections later this year, according to a statement by US Africa Command.

A senior US official familiar with the meetings said Norland and Townsend also discussed the prospect of military partnership opportunities with the United States, but emphasized the need for a unified Libyan government first.

The official, who spoke to Al-Monitor on condition of anonymity, described the meetings as “very productive.”

Why it Matters: Townsend’s visit to Tripoli was the first by a senior US military commander since a 2019 offensive led by Khalifa Hifter against the UN-recognized government there plunged the country into renewed civil war.

But Biden administration officials, who are eager to restore their diplomatic presence on the ground in Libya, are increasingly worried that wrangling over a constitutional framework may derail the country’s reunification process.

Moreover, thousands of Russian, Syrian and sub-Saharan African mercenaries, as well as Turkish troops, remain in Libya in violation of the cease-fire agreement. Egypt, Russia and Turkey say they back the UN process, but stakeholders failed to agree on a pathway to remove the fighters during a June summit in Berlin.

US officials now privately acknowledge it’s unlikely either Moscow or Ankara will withdraw most of their forces before Libyans go to the polls, and are wary of disrupting the balance of power on the ground at such a sensitive time.

"There is no sign these forces plan to try to effect the outcome of any elections,” the senior official told Al-Monitor.

US officials now say the best hope for an exit of foreign fighters is for that to be requested by an elected Libyan government.

“There’s no organization or body that is more capable of bringing about that departure than a strong, unified Libyan government chosen by its own people. And so that’s why elections are so important,” Joey Hood, the State Department’s top official for the region, told reporters following the Berlin conference.

US officials see the potential failure to hold legitimate elections on time as the more immediate threat to Libya’s stability. Renewed large-scale fighting could pose a devastating setback for the political process and invite further foreign intervention.

From AFRICOM's perspective, the presence of the Kremlin's Wagner mercenaries in Libya is particularly troubling.

Russia introduced fighter aircraft and radar systems in a bid to tip the scales in favor of Hifter’s offensive last year, a move that US military officials worry could evolve into a tactical problem for NATO if Moscow establishes a permanent presence there.

Townsend last week emphasized to Libyan officials that the departure of even a few hundred foreign fighters from each side before the elections can grease the wheels for larger-scale withdrawals once a new government is in place. On Monday Libya’s interim foreign minister said reports of some small-scale departures were true, calling the move a “modest start."

Yet as Libya's politicians and generals jockey for influence, the Kremlin has sought to play both sides. Its Wagner mercenaries — accused leaving a trail of war crimes in Libya, Syria and the Central African Republic — continue to make inroads elsewhere in the region.

Word that Mali’s government is working on a security deal with the Russian mercenaries as France draws down its military presence in the Sahel has raised alarm bells in Western capitals.

Townsend also visited Tunisia and Algeria last week in the latest sign US officials are seeking to reinforce defense ties on the margins of Wagner's inroads into Africa.

"Things that we can do to try to bolster confidence and security in these locations, including Tripoli, we’re interested in doing that," the US official said.

Earlier this year, AFRICOM invited Libya’s Lt. Gen. Haddad to its flagship multinational exercise, African Lion. The US military is also looking to continue recent small-scale joint training for Libyan soldiers from both sides, including counter-IED training in the region.

Larger-scale cooperation will have to wait until Libya forms a unified military, officials say.

What’s Next: Mohamed Menfi, who heads Libya’s presidency council, said the body will hold an international conference sometime this month to garner support for a stable political transition.

“Either we succeed in our democratic transition through free, fair, and transparent elections... or we fail and relapse into division an armed conflict,” Menfi told the UN General Assembly last month.

Meanwhile there are signs the Biden administration is planning to turn up the pressure on Libya's foreign players.

Speaking to reporters following the Berlin summit in June, Joey Hood expressed confidence that the US "can set the conditions to provide the incentives and maybe other parameters for these forces to leave."

Last week, the US House of Representatives passed a landmark bill that would sanction foreign actors backing Libyan fighters on both sides.

A separate measure included in the House’s version of the annual defense spending legislation would add the weight of US sanctions to the UN’s largely impotent arms embargo on Libya.