The Biden administration has just appointed its first special envoy for Libya and sent Assistant Secretary of State Joey Hood to visit the North African nation. 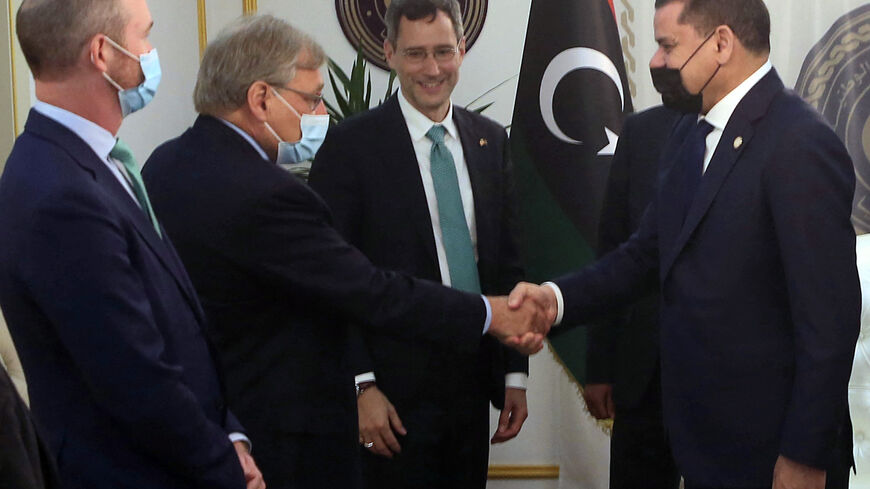 Libyan Prime Minister Abdulhamid Dbeibeh (R) shakes hands with a US State Department official as senior official Joey Hood (C) watches, during a visit by US officials to Libya in a show of support for the country's transitional government, Tripoli, Libya, May 18, 2021. - -/AFP via Getty Images

The Biden administration just appointed its first special envoy for Libya. Ambassador Richard Norland, who has been the United States’ ambassador to the North African country since August 2019. He will now double as a special envoy.

Out of the US Embassy in Tunis, Tunisia, Libya’s western neighbor, Norland has been vocal on Libyan affairs, regularly visiting the country and tweeting, almost daily, about its politics. At one point he seemed to be the only American diplomat closely following the Libyan conflict while the Trump administration appeared to be distancing itself.

The United States has some moral responsibility toward Libya because it was under Barack Obama that it took part in the 2011 military intervention in support of the armed rebellion, dubbed the Libyan Revolution, that toppled former leader Moammar Gadhafi, and which ended up sending Libya into chaos, conflict and lawlessness.

In what is seen as an emerging new US active approach to Libya, US Acting Assistant Secretary of State Joey Hood visited Tripoli May 18 where he met his counterpart Najala al-Mangoush, Prime Minister Abdulhamid Dbeibeh and Presidency Council chief Mohamed al-Menfi. Hood is the highest US official to visit the country since 2014 when the US Embassy staff relocated to Tunisia because of the deteriorating security in the country.

In a joint press conference with Manghoush in Tripoli, Hood said, "The goal of the United States is a sovereign, stable, unified Libya with no foreign interference and a state that is capable of combating terrorism." He added, “We [United States] oppose foreign fighters; we oppose proxy forces.” His host echoed him by saying, “Foreign interference [in Libya] must end.” She also called on the United States to reopen its embassy and consulate in Tripoli, which have been closed for the last seven years.

Foreign troops and mercenaries are a contentious issue in Libya and abroad. Many fear their presence might derail the entire political process including the promised Dec. 24 elections.

Back in December, the United Nations acting envoy to Libya, Stephanie Williams, estimated the number of foreign fighters to be around 20,000 stationed in at least 10 different bases. None of these bases are under any kind of Libyan control.

Williams, who left the UN job in March, told Al-Monitor she thinks the Biden administration is more serious about Libya in both policy and strategy, adding that she noticed this “new tone” during her last briefing to the UN Security Council Jan. 28. She also said that the appointment of Norland as envoy for Libya is a “good signal” indicating the return of the United States to Libya.

She thinks the United States is going through a “comprehensive process in policy” that aims to return to multilateralism in tackling global affairs including conflicts. This starkly contrasts with the former administration that followed a more unilateralist policy under the banner of "America First."

Prior to his appointment as envoy, Norland, known for his regular tweets about Libya, had warned "of the Russia dangers in Libya."

President Joe Biden has repeatedly warned Russia that it can expect tough US competition on global issues — and Libya is likely no exception. Antony Blinken, the top US diplomat, just wrapped up his Middle East tour that took him to Egypt, among other countries. The Libyan developments must have been discussed in Cairo since Egypt is military strongman Khalifa Hifter’s ally, and it has security and economic interest in its eastern neighbor. Hood’s visit to Tripoli signals an important message to all those involved in the Libyan conflict, both locally and regionally. The US’ potentials to “convene internationally” compel and encourage others to follow, Williams said.

She also draws a certain parallel with the situation in Iraq after the invasion of 2003 and the military intervention in Libya in 2011, noting that in Libya “the lessons of Iraq were not learned.”