Libyan National Army commander Khalifa Hifter visited Cairo and met with the US ambassador to Libya at a time of heightened tensions between Hifter and the new Libyan government of national unity. 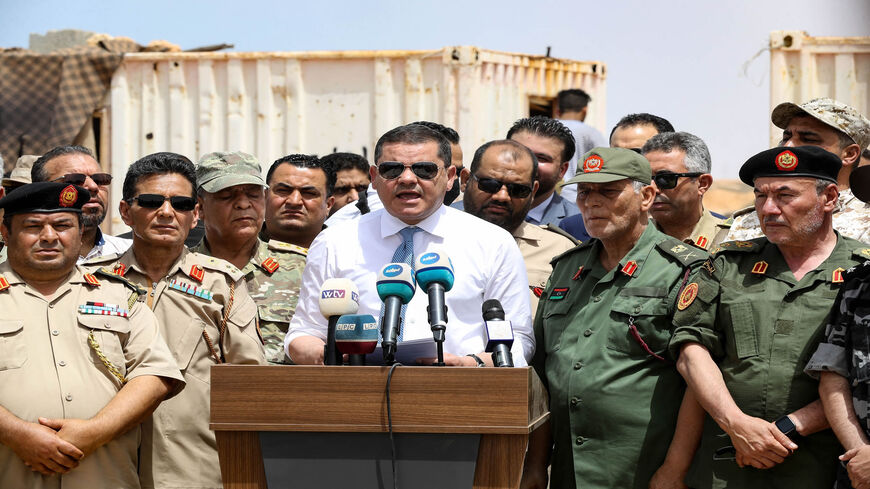 Libyan Interim Prime Minister Abdul Hamid Dbeibah delivers a speech in the town of Buwairat al-Hassoun, during a ceremony to mark the reopening of a 186-mile road between the cities of Misrata and Sirte, Libya, June 20, 2021. - Mahmud Turkia/AFP via Getty Images

The US Embassy in Libya said Aug. 10 on Twitter that the meeting comes as part of US efforts to support the Libyan parliamentary and presidential elections scheduled for the end of this year.

“Norland continues to focus on the urgency of supporting the difficult compromises necessary to establish the constitutional basis and legal framework needed now in order for the elections to take place Dec. 24,” the tweet read.

The meeting came amid escalating tensions between Hifter and the transitional government headed by Abdul Hamid Dbeibah.

On Aug. 9, Hifter announced military promotions without consulting or obtaining approval from Mohamed al-Menfi, head of the Presidential Council of Libya. The Presidential Council says that it is the authority entrusted with military promotions or appointments falling under its jurisdiction at this stage, as per the powers granted to it by the political agreement reached in Geneva early this year.

In a speech at the ceremony Aug. 9 to commemorate the establishment of the Libyan army, Hifter told his forces that the army will not be subject to any authority other than the authority elected by the people.

Ahmed Oleiba, an Egyptian researcher in regional security studies at the Egyptian Center for Strategic Studies, told Al-Monitor that trust between Hifter and the transitional government has declined, which may deepen concerns over a possible setback in the entire political process.

“We have reached the peak of political polarization, and optimism about the success of the political process in Libya has declined,” Oleiba said.

On July 15, United Nations Special Envoy to Libya Jan Kubis accused “spoilers” of trying to obstruct the country's elections slated for Dec. 24. He told the UN Security Council that many key players in Libya reiterated their commitment to the elections, but added, “I am afraid many of them are not ready to walk the talk.”

Meanwhile, the Security Council has threatened to impose sanctions against any individual or group trying to obstruct the electoral process in Libya.

Jalel Harchaoui, senior Libya researcher at the Geneva-based Global Initiative Against Transnational Organized Crime, told Al-Monitor, “When Special Envoy Richard Norland and Acting Assistant Secretary of State Joey Hood visited Tripoli in May, they made a point of not [meeting with] the field marshal [Hifter]. At the time, US policy consisted of just ignoring him, which also meant Washington exerted no pressure on him.”

He added, “Now, three months later, Washington realizes that Hifter has gotten in better shape on several fronts and is determined to follow a rather assertive playbook in the coming months.”

Norland said that Hifter could play a role in forming a unified Libyan army, as he expressed during an interview with Al Jazeera Aug. 5 his confidence that the elections would be held on time.

Rhetorically, Hifter is in favor of the elections. He claims he seriously wants them — and this pro-democracy narrative is central to his current strategy. Such discourse helps him discredit Prime Minister Dbeibah in Tripoli, Harchaoui added.

He noted, “Hifter has understood that Dbeibah wants to stay in power in Tripoli as long as possible. The field marshal is therefore instrumentalizing the notion of elections, but he does not necessarily believe in them either.”

Following the meeting with Norland, Harchaoui said he believes that Hifter is likely to form a new parallel government in Cyrenaica (in eastern Libya) before December. So the military leader is busy entrenching and consolidating his military authority in the territories that are already more or less under his aegis. Cyrenaica and parts of Fezzan, he added.

Libya has been plagued by chaos and civil war since a NATO-backed uprising toppled former Libyan leader Moammar Gadhafi in 2011.

In the years that followed the uprising, the oil-rich country has been divided between a UN-backed government in the capital Tripoli, and a competing authority based in the east of the country, both backed by armed groups and foreign governments.

Cairo supported Hifter since his war against militants in eastern Libya in 2014, as it considers him a bulwark against Islamist groups, including the Muslim Brotherhood.

In April 2019, Hifter and his forces, backed by Egypt, the United Arab Emirates and Russia, launched an offensive to try to capture Tripoli from armed groups aligned with the then-UN-backed Government of National Accord (GNA).

But Hifter’s 14-month campaign collapsed after Turkey, Egypt’s arch-rival in a broader regional struggle over political Islam, ramped up its military support for the GNA forces in Tripoli with hundreds of troops and thousands of Syrian mercenaries.

Libya almost turned into a theater of proxy war between the competing countries, including Turkey and Egypt. But in October 2020, the Libyan rival parties signed a permanent cease-fire agreement, and one month later, the two parties to the Libyan conflict reached a road map in Tunisia that paves the way for holding parliamentary and presidential elections by the end of 2021. The road map also included the formation of an interim government to run the country for a transitional period until elections are held.

However, the Libyan Political Dialogue Forum — a body made up of 75 people chosen by the UN to represent the country's political, military and social fabric — has repeatedly failed to reach consensus regarding the constitutional basis and legislation regulating the upcoming December elections.

Press reports indicated that Hifter held meetings with Egyptian officials during his recent visit to Cairo in August.

Oleiba said that Cairo still views Hifter as one of the parties to the national power who can consequently serve as a partner in the future political process.

“Egypt sees the Libyan army led by Hifter as a national project, but it prefers to stand at the same distance from all parties when it comes to the issue of political ambition,” he noted.

Oleiba said that Cairo presents itself as a mediator between all parties, and added, “One of the lessons learned during the past period is that Cairo wants to have strong relations with all parties in Libya.”

However, Harchaoui said, “There hasn’t been any warmth or cordiality between Hifter and Cairo for years. It is an often-tense relationship because Egypt seldom approves of Hifter’s brinkmanship and overconfident methods, which sometimes come with consequences that hurt Egypt’s national interests.” But, at the same time, the two actors are inextricably linked to each other by geography, history and other factors, he noted.

Harchaoui said that Egypt isn’t in favor of Hifter forming a new parallel government in Cyrenaica at this juncture. “But if he does, it will not be a catastrophe for Cairo,” he added.

Another major obstacle complicating the situation in Libya is the presence of thousands of foreign forces and mercenaries and the failure to withdraw them under the cease-fire agreement signed last October.

Egypt has repeatedly demanded that all foreign forces and mercenaries leave Libya without delay. Turkey, for its part, says its presence is legitimate under a controversial military cooperation agreement it signed with the GNA in November 2019.

Oleiba said that “one of Cairo’s goals in Libya is to put an end to Turkish influence there.”

Meanwhile, the UN Support Mission in Libya announced in a statement that Rida Faraj Fraitis, chief of staff for the first deputy prime minister of the Government of National Unity (GNU), was kidnapped Aug. 2, along with one of his bodyguards, during his visit to the headquarters of the GNU in Tripoli.

The mission expressed its deep concern about the targeting of those responsible for the democratic transition in Libya.

Harchaoui said, “In 2020, after the LNA took a beating in west Libya, many senior diplomats assumed that Hifter and his main foreign backer, Abu Dhabi, could eventually be swayed to accept, and coexist with, Turkey in Libya. This may perhaps be true to some extent about Russia and Egypt — both states are pragmatic,” he added.

But Hifter, the UAE and others will never stop working at undermining a government of national unity that accepts Turkish presence in Libya, Harchaoui concluded.