Is Egypt sidelining its Libyan ally?

Egypt has for the first time hosted a delegation from western Libya, which may point to the possible marginalization of eastern military commander Khalifa Hifter in upcoming peace talks. 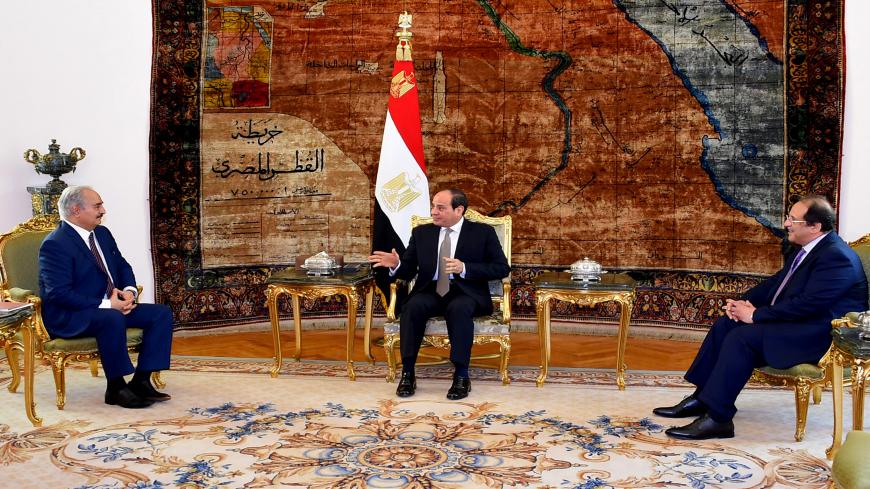 CAIRO — Members of the Egyptian Committee on Libya, which is made up of current diplomats and intelligence officers, visited Sept. 14 the commander of the Libyan National Army (LNA), Khalifa Hifter, in Libya’s eastern city of Benghazi. The visit has raised questions about the reasons behind this surprise move.

It was the second time in a month that a high-level Egyptian delegation meets with Hifter. On Aug. 18, Hifter had met with a delegation headed by the head of Egypt’s military intelligence agency, Maj-Gen. Khaled Megawer.

Observers have linked the Sept. 14 visit to the latest Egyptian moves in the Libyan file after Cairo hosted talks with a delegation from western Libya on Sept. 7. Analysts believe that the meeting may point to a marginalization of Hifter in favor of his ally Aguila Saleh, head of the Tobruk-based parliament.

According to the Egyptian Middle East News Agency (MENA), the Sept. 14 meeting focused on common issues between the two countries and the latest developments on the regional and international levels. The Egyptian delegation has, according to MENA, stressed the need to resume the political process and enforce a cease-fire in Libya.

On the same day, the Egyptian delegation met with Saleh to discuss “the need to reach an urgent political solution to the Libyan crisis,” parliamentary spokesman Abdallah Abaihig said in a press statement Sept. 14. He added, “The two sides also tackled the situation in Libya and ways to end the conflict. The Egyptian delegation stressed the need to return to the political track and enforce a cease-fire in Libya.”

In this context, Egyptian member of parliament Mustafa Bakri told Al-Monitor that the Egyptian visit to Libya aimed to find out about the Libyan positions on the latest round of negotiations held in Cairo. “The delegation included Egyptian experts and researchers and members of the [Egyptian] Committee on Libya tasked with collecting data on the latest political developments and the recent demonstrations,” he said, in reference to the protests that erupted in Tripoli and Benghazi.

On Sept. 7, Cairo hosted a delegation from western Libya, made up of members of the parliament and the High Council of State, for the first time since relations between Egypt and the Tripoli-based Government of National Accord (GNA) deteriorated after head of the GNA Fayez al-Sarraj signed two agreements on security cooperation and maritime jurisdiction areas with Turkey in November 2019. During the talks, the two sides agreed on the need to announce a road map to end the transitional phase in Libya, set a date for elections no later than October 2021, in addition to resuming flights between Cairo and Tripoli.

Bakri said, “The Egyptian Foreign Ministry and the Egyptian intelligence agency have received instructions from the political leadership to find common grounds between Libya’s [rival] parties that would pave the way for a political solution based on the Cairo initiative.”

LNA spokesman Maj. Gen. Ahmed al-Mismari refused to comment to Al-Monitor on Hifter’s position on the negotiations taking place in Cairo and Morocco. However, during a press conference Sept. 16, Mismari said, “We'll cross that bridge when we come to it. The two parties [LNA and pro-government forces] are committed to a cease-fire in order to give a chance to the political solution that Libyans seek. … We will continue to fight to achieve sovereignty for our land.”

The Egyptian efforts have coincided with talks held in Morocco between representatives from the Tripoli-based High Council of State and from the Tobruk-based parliament, with the aim to reach a comprehensive agreement on the mechanisms needed to assign sovereign positions and unify them.

Bakri, the Egyptian member of parliament who is close to the authorities, said that Morocco aims to create a new agreement dubbed “Skhirat 2” in reference to the Skhirat Agreement that Morocco brokered in December 2015. These Moroccan efforts are in contrast with the Egyptian-sponsored talks that seek to build on the Cairo initiative aimed to reach a Libyan-Libyan solution.

Rokha Hassan, a member of the Egyptian Council for Foreign Affairs, believes the Egyptian delegation’s visit to Libya comes as part of the latest efforts to unify Libya’s rival parties.

Hassan told Al-Monitor that the Libyan rounds of talks in Morocco and Egypt may be an attempt to pave the way for a larger political dialogue in Geneva to form a presidential council made up of three figures representing the three Libyan provinces in the west, east and southwest.

Meanwhile, Sarraj announced Sept. 16 that he will step down by the end of October. The United Nations Support Mission in Libya (UNSMIL) described Sarraj’s decision as a “courageous” step, saying in a Sept. 17 statement, “Building on the statements issued by [Sarraj] and Speaker of the House of Representatives [Aguila] Saleh on 21 August 2020, and recent meetings between key Libyan parties in Montreux in Switzerland, Morocco and Egypt, we have an opportunity to restart the fully inclusive intra-Libyan political dialogue, which the United Nations Support Mission in Libya (UNSMIL) intends to move forward with at the earliest opportunity."

But, Hassan added, “Theoretically, these [Moroccan and Egyptian] steps are aimed at peace, but their implementation on the ground may prove difficult,” referring to the complicated situation that has resulted from Hifter’s offensive launched against Tripoli in April 2019. According to Hassan, the offensive has proved to be a major mistake that later led to Turkey’s intervention in the Libyan crisis by sending Syrian mercenaries to Libya, further complicating the situation.

After Hifter suffered a series of setbacks in his offensive against Tripoli, Egyptian President Abdel Fattah al-Sisi announced in June, in the presence of Hifter himself and Saleh, the Cairo initiative, which calls for UN-supervised elections for the three provinces within 90 days. The initiative was widely welcomed by the international community, while observers saw it as an Egyptian plan to reduce Hifter’s influence in Libya in favor of Saleh.

On Hifter’s role and future in the ongoing negotiations, Hassan believes there is a will to include new faces different from the figures that are currently leading the Libyan scene. “Egypt’s interests lie in the need to achieve stability and reach a peaceful solution in Libya, and it [Egypt] does not depend on figures or specific people,” Hassan added, explaining that if need be, Egypt is ready to witch its alliances with another figure.

Claudia Gazzini, a senior analyst for Libyan affairs at the International Crisis Group, told Al-Monitor, “Hifter does not support the leadership role that Saleh is seeking to fill [in eastern Libya], and he has not backed the Moroccan-led talks. He also refuses to support any diplomatic solution that aims to isolate him.”

Gazzini added, “Cairo has indeed shown signs to isolate Hifter while at the same time improving Saleh’s image. This has led to a dispute between the Egyptian authorities and Hifter.”

She added, “I don’t think anyone is ready to abandon Hifter officially — at least as a military leader — as long as there is tension and the threat of war in Libya. But what is certain is that there is no room for Hifter to play a pioneering political role in Libya, and he is not part of the [plans] of his closest allies, like Russia and the United Arab Emirates.”

However, Bakri believes “the LNA is needed to dismantle the militias and play an important role in achieving stability on the border with Egypt. This is why Cairo will not let go of its leader [Hifter].”