The US envoy is for pushing for cooperation with Libya's planned elections in December, State Department says. 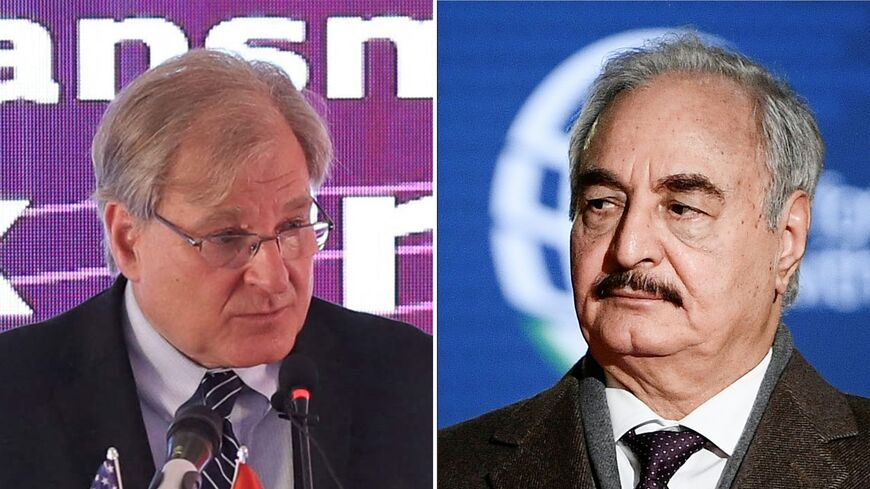 US Ambassador to Libya Richard Norland (L)has traveled to Cairo to meet with Libyan military strongman Khalifa Hifter (R). Here, Norland speaks after the US Infinera and Hatif Libya companies signed an agreement to develop the national network of communication in Libya's capital, Tripoli, on July 26, 2021, while Hifter attends a conference on Libya on Nov. 12, 2018, at Villa Igiea in Palermo, Italy. - MAHMUD TURKIA (L) / FILIPPO MONTEFORTE (R) / AFP via Getty Images

US Ambassador Richard Norland met Wednesday with Libyan warlord Khalifa Hifter in Cairo in a continuing bid to help reunify the country after a decade of civil war.

Norland’s meeting with Hifter comes as preparations for Libya’s December parliamentary and presidential elections — which are to follow last year’s UN-backed cease-fire — are faltering.

Libya has been ravaged by intermittent civil war since the 2011 fall of longtime dictator Moammar Gadhafi in an uprising backed by NATO and Arab Gulf governments.

The planned elections are the country’s first since a UN-backed ceasefire halted major fighting last year between Hifter’s forces and those aligned with internationally recognized government in Tripoli.

Why it matters: Faced with limited leverage, the Biden administration has been cautiously pursuing a realpolitik approach to Libya’s fraught reunification.

Norland expressed confidence during an interview with Al Jazeera on Sunday that the elections will be held on time, adding that Hifter could play a role in forming a unified Libyan army.

Last year’s cease-fire agreement stipulates that all foreign forces leave the country and that local militias, including those aligned with Hifter, be folded under the authority of the unity government, currently led by Prime Minister Abdulhamid Dbeibah.

But Hifter, whose base of support is in eastern Libya, and his foreign backers remain reluctant to abide by the agreement. Hifter’s forces have blocked government officials’ visits to the country’s east, and he has dispatched rival diplomats to maintain his influence in Libya’s south.

Following Norland’s comments, the rogue general said Monday that his forces “will not be subject to any authority and will not surrender.”

Despite the hurdles, Libya’s progress toward peace and reunification should not be understated. Norland told Al Jazeera that US officials will continue to work to bring together the conflict’s foreign backers.

What’s next: Libya’s Political Dialogue Forum failed to meet last month’s deadline to agree on a constitutional framework for the elections. The deliberations, which continued Wednesday, are holding up further work by Libya’s high electoral commission.

Meanwhile, Western officials are warily eyeing the country’s security situation ahead of the planned elections.

Several thousand Russian, Syrian and African mercenaries remain in Libya after supporting Hifter’s failed 2019 offensive against Tripoli, some with the financial backing of the United Arab Emirates. At least 6,000 Syrian mercenaries remain with the support Turkey on the side of the Tripoli government, American officials said in June.

Diplomats at an international conference in Berlin in June failed to agree on a mechanism to withdraw the foreign mercenaries. US officials continue to insist that all foreign forces leave, but both timing and political will remain key.

“We think from our conversations with Turkey and Russia that they are ready to discuss the departure of Syrian fighters,” Norland was quoted as saying by Al Jazeera on Sunday.

Joey Hood, the top US diplomat overseeing Middle East policy, suggested after attending the Berlin summit that the fighters’ withdrawal may not come until a legitimately elected unified Libyan government demands it.

“That’s why the elections are so important,” Hood told reporters in June.

“The presence of foreign troops in Libya is an ambivalent reality. It violates sovereignty and prevents full peace, but it also helps maintain calm,” said Jalel Harchaoui, a senior fellow at the Foreign Policy Research Institute.

“The Biden administration knows full well that in order to kick out the 3,000 or so clandestine Russian fighters now in the North African country, a substantial, costly, disruptive campaign is necessary,” Harchaoui told Al-Monitor.

“The alternative consists in talking to Russia, hoping that that dialogue helps regularize the situation gradually over time, without rocking the boat too hard,” he said.

Still, he said, the Kremlin shows no sign of willingness to fully surrender its military toehold in North Africa, a matter of strategic concern for Pentagon and NATO officials.

Know more: Egypt and Algeria, once on opposing sides of Libya’s conflict, are coming together amid the promise of national elections, Mohamed Sabry writes.