Joey Hood, the acting assistant secretary of state for Near Eastern affairs, also said the United States expects the elections scheduled for December to take place. 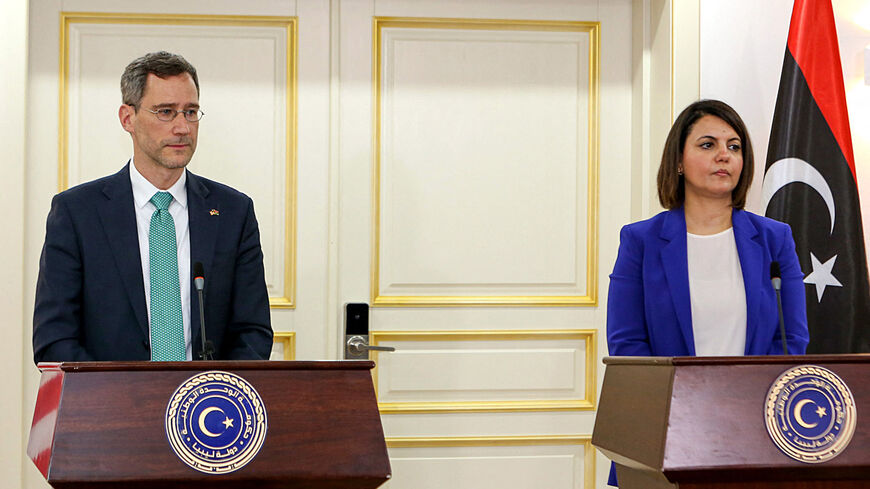 Senior US State Department official Joey Hood and Libyan Foreign Minister Najla al-Mangoush give a press conference in Tripoli on May 18, 2021, during a visit by the US envoy to Libya in a show of support for the country's transitional government. - AFP via Getty Images

After a conference on Libya’s political future ended without a concrete plan for the withdrawal of foreign forces, a top US diplomat expressed optimism but said Washington is "realistic" about what can be achieved ahead of elections later this year.

“We’re realistic,” Hood added. “We can’t wave a magic wand and make this happen, but working together with the Libyan people, I think there’s a strong chance that we can set the conditions to provide the incentives and other parameters for these forces to leave.”

Topping their agenda was the departure of foreign fighters and mercenaries, whose presence in the North African country is a violation of the UN arms embargo that has been in place since the uprising that toppled longtime dictator Moammar Gadhafi in 2011.

Libya had been embroiled in civil war since 2014, with the Turkey-backed Government of National Accord pitted against Khalifa Hifter’s self-styled Libyan National Army, which counted Russia, the United Arab Emirates and Egypt among its supporters.

The foreign backers have flooded the country with mercenaries and arms. The United Nations estimated in December that 20,000 foreign fighters remained in Libya in violation of an October 2020 cease-fire agreement reached by the two sides in October 2020, which called for countries to withdraw their proxy fighters within 90 days.

US officials told reporters that Turkey and Russia, which backed opposite sides in Libya’s civil war, had reached an initial understanding to each withdraw 300 Syrian mercenaries “as a tangible, practical first step.” Libyan Foreign Minister Najla Mangoush said Wednesday she is hopeful that foreign forces will begin to leave the country within days.

During the Berlin conference, the transitional Government of National Unity reaffirmed its commitment to holding elections on Dec. 24. Under a UN-supported process known as the Libyan Political Dialogue Forum, Dbeibah and a three-member presidential council are leading an interim government.

Experts have questioned whether Libya’s current leaders are willing to step aside for elections, but Hood said Thursday that the United States “fully expects” voting to take place in December.