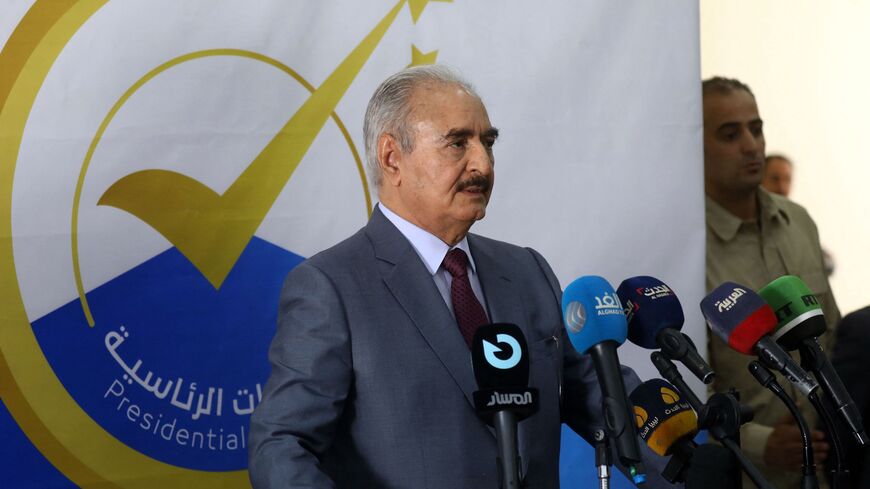 Libya's eastern military chief Khalifa Hifter gives a speech at the local headquarters of the High National Election Commission in the eastern city of Benghazi on Nov. 16, 2021. - ABDULLAH DOMA/AFP via Getty Images

Libyan warlord Khalifa Hifter announced on Tuesday he is running for president in upcoming United Nations-backed elections, pledging to “begin the path of reconciliation" after more than a decade of turmoil and civil war.

"I declare my candidacy for the presidential election, not because I am chasing power but because I want to lead our people towards glory, progress and prosperity," Hifter said in a televised address.

Libya has been engulfed in chaos since the NATO-backed uprising that toppled longtime dictator Moammar Gadhafi in 2011. The oil-rich North African country was then ruled by two administrations, each supported by foreign backers including Russia and Turkey that flooded Libya with illegal arms and mercenaries.

Hifter commanded the eastern-based Libyan National Army, which fought the UN-recognized Government of National Accord based in Tripoli for six years before an October 2020 cease-fire ended the heaviest fighting and called for the withdrawal of foreign fighters. An interim government consisting of a prime minister and three-member presidential council took power in March and is meant to prepare the country for nationwide elections in late December.

Hifter’s candidacy is likely to meet resistance by those in western Libya who accuse the former CIA asset-turned-strongman of war crimes during Libya’s years-long conflict. He’s currently facing several federal torture lawsuits in Virginia, where he once lived.

The former commander announced in September that he would step down from his military duties for three months, a move required of presidential candidates under Libya’s new elections law. On Tuesday, Hifter officially submitted his registration in the eastern city of Benghazi.

But there is mounting uncertainty over whether the elections will take place as planned. With just weeks to go, Libya’s rival entities have yet to agree on rules for the presidential and parliamentary polls, which were originally both scheduled for Dec. 24.

Human rights groups have also questioned whether war-torn Libya can hold inclusive elections free of coercion and intimidation. Last week, the UN secretary-general, the United States and other world powers threatened sanctions on anyone who obstructs the vote.

Saif al-Islam, a son of Gadhafi who is wanted by the International Criminal Court for crimes against humanity, registered as a presidential candidate on Sunday. Other expected candidates for the country’s top post include Libyan Prime Minister Abdulhamid al-Dbeibah, parliament speaker Aguila Saleh and former Interior Minister Fathi Bashagha.