Abdulhamid Dbeibeh will serve as prime minister and Mohammed al-Menfi as the head of the presidential council. 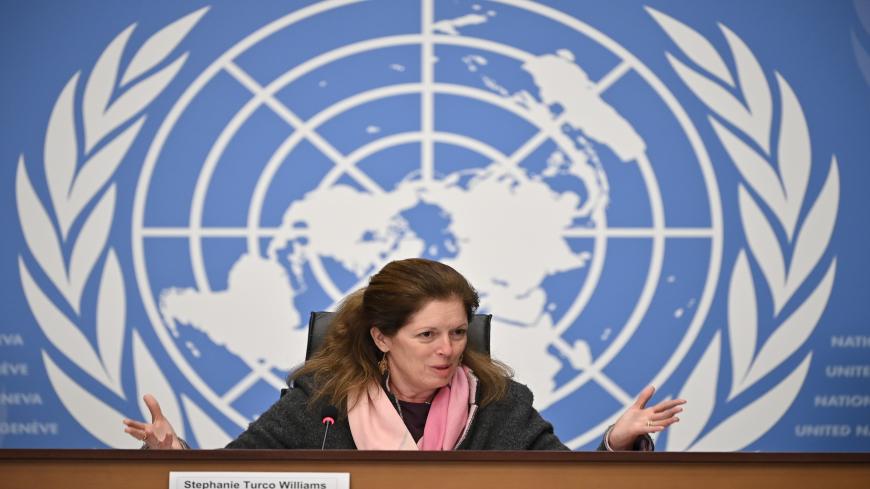 Deputy Special Representative of the UN Secretary-General for Political Affairs in Libya Stephanie Williams gestures as she speaks during a press conference in Geneva, following the election of a new interim government for Libya during the Libyan Political Dialogue Forum, Switzerland, Feb. 5, 2021. - Fabrice Coffrini/AFP via Getty Images

United Nations-facilitated talks on Libya have wrapped up with a new interim government for the war-ravaged country, with Abdulhamid Dbeibeh selected as prime minister and Mohammed al-Menfi as head of a three-member presidential council.

“I am pleased to witness this historic moment,” UN acting Libya envoy Stephanie Williams told the delegates on Friday. “The decision that you have taken today will grow with the passage of time in the collective memory of the Libyan people.”

The selection of an interim government is the latest attempt at unifying the North African country after six years of civil war and an uprising that overthrew and killed longtime dictator Moammar Gadhafi. An October cease-fire brokered by the UN Mission in Libya paused the fighting between the internationally recognized Government of National Accord and Khalifa Hifter’s Libyan National Army. Both sides called for nationwide presidential and parliamentary elections.

Dozens of delegates from across Libya gathered this week near Geneva, Switzerland, to hear presentations from candidates running for interim prime minister and a three-member presidential council. As part of the UN-supported process, known as the Libyan Political Dialogue Forum, candidates pledged to hold general elections Dec. 24 and to appoint women to 30% of all senior government positions.

The vote went to a runoff Feb. 5 after none of the four slates of candidates secured enough votes to meet the necessary 60% threshold. Menfi, Libya’s former ambassador to Greece, will serve as the presidential council’s head and Dbeibeh, a Misrata-based businessman, will serve as prime minister in the interim goverment.

Menfi and Dbeibeh beat out the list featuring eastern-based parliament Speaker Aguila Saleh and western-based Interior Minister Fathi Bashagha as council head and premier, respectively. In the final round of voting, 39 of 73 votes went to Dbeibah’s list, and 34 for Bashagha’s.

Bashagha tweeted his congratulations Friday to the winners of the UN-led Libyan dialogue, which he described as “the full embodiment of democracy.”