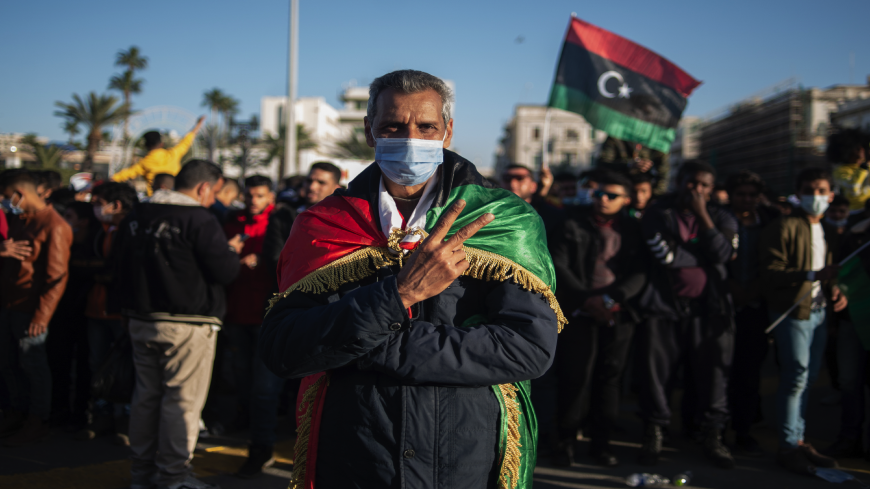 People wave flags and chant slogans during a gathering to commemorate the 10th anniversary of the Arab Spring in Martyrs Square on Feb. 17, 2021, in Tripoli, Libya. The anniversary comes after a new executive authority was recently announced in Libya. Mohammed al-Menfi was elected as head of the Presidential Council and Abdulhamid Dbeibeh as interim prime minister of the new unified Libyan authority and tasked with delivering new elections for the country, scheduled for December 2021.

During UN-facilitated talks in Geneva, Switzerland, earlier this month, a group of Libyan delegates elected Dbeibeh as their next prime minister and named a three-member presidential council. Dbeibeh, a prominent Misrata-based businessman, will steer the war-battered country until general elections are held in December.

Egypt, along with the United Arab Emirates and Russia, has backed renegade commander Khalifa Hifter in Libya’s civil war. Sisi views the fighting between Hifter’s forces and the internationally recognized Government of National Accord as a security threat to Egypt, which shares a 746-mile border with Libya.

In a statement, Sisi voiced “Egypt’s full readiness to provide all its expertise and experience … in a way that contributes to putting Libya on the right track and preparing the country to move toward horizons of construction, development and stability.”

The election of an interim government is the latest attempt at unifying the North African country after six years of civil war and an uprising that overthrew and killed longtime dictator Moammar Gadhafi. Dbeibeh and the presidential council chosen in Geneva have pledged to hold nationwide elections on Dec. 24 and appoint women to 30% of all senior government positions.

As the UN seeks to unify Libya’s rival administrations, an Egyptian delegation visited Tripoli earlier this week. The Egyptians and their Libyan counterparts reportedly discussed plans to reopen Egypt’s embassy in Tripoli, which it shuttered in 2014.