The unity government is supported by both factions in the Libyan civil war and will lead the country to the December elections. 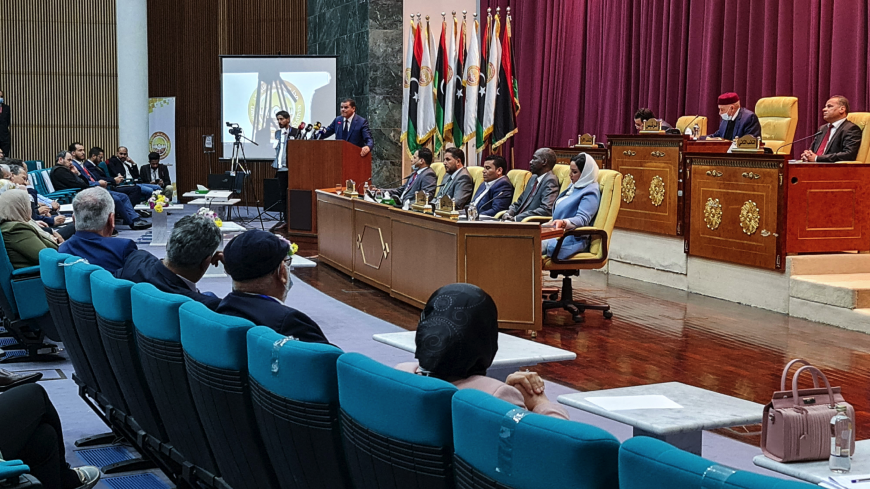 Libya's Prime Minister-designate Abdul Hamid Dbeibah addresses lawmakers during the first reunited parliamentarian session, in the coastal city of Sirte east of the capital, on March 9, 2021. A total of 132 members of the 188-strong House of Representatives gathered to vote on interim premier Dbeibah's Cabinet line-up, a crucial step toward December elections and stability after a decade of violence. - MAHMUD TURKIA/AFP via Getty Images

An interim unity government received parliamentary approval in Libya on Wednesday. The government’s formation formally ended Libya’s divide between warring factions in different parts of the country, though divisions remain.

Prime Minister Abdul Hamid Dbeibah’s government was approved by 132 lawmakers. The interim government also includes a three-member Presidential Council headed by diplomat Mohammad Younes Menfi. The government is to remain in power until elections on Dec. 24, The Associated Press reported on Wednesday.

Libya has been in chaos since the 2011 NATO-backed uprising that toppled longtime ruler Moammar Gadhafi. From 2014 to 2020, the country was mired in a civil war. The conflict produced a divided country between the eastern-based Libyan National Army (LNA) led by Gen. Khalifa Hifter and the United Nations-recognized Government of National Accord (GNA) in the west and the capital, Tripoli, which is strongly supported by Turkey. The LNA is in turn backed by neighboring Egypt and the United Arab Emirates.

Both the GNA and the LNA welcomed the new government and have pledged support for the December elections. However, on the ground, Libyan territory and institutions remain under the control of different groups loyal to the two administrations, Reuters reported also on Wednesday.

Dbeibah, a businessman, was designated prime minister in February during UN-backed negotiations and given three weeks to form a government. A cease-fire in October also helped pave the way for reconciliation by ending the fighting.